Who are these jokers?

I'm primarily a thematic collector sorting jokers into categories like sports, politics, or dancing jesters.  I'm now getting more interested in the publishing history of these jokers so I'm trying to identify all the ones that are now hanging in my living room. Suggestions, Corrections, or other Help Appreciated. You can use the comments. Thanks to TVB, CT, and others. 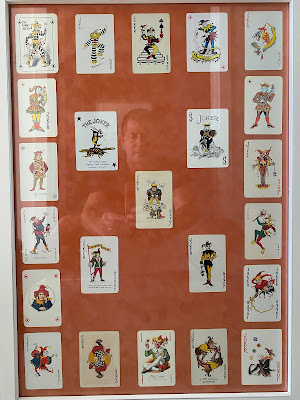 You'll notice that I have nicknames for many of these jokers. (This started with Dan Nordquist).

1A - First row, first column. The one in the top left. Funny Joker is published by Cambissa & Co., Italy since 1956 (Per Tom van Berkum). I have 4 variations  in the Jester Walking section of the collection.

1B (next one to his right). I call this joker the Hamburgler because of a slight resemblance to a character in an old series of McDonalds ads. He comes from China and is used in Japan. I have him in the jester dancing section. I can't seem, as is often the case with Chinese jokers, to find the publisher or history.

1C. Staircase Joker is by AARCO and is in my collection in the jesters standing section. I have 5 variations you can see there. The variation are also shown in my article on history of  ARRCO.

1D. This Scatterman joker is the standard Cartamundi joker: I have 90 plus variations of him. Scatterman has his own section in my collection,next to the juggling and performing jokers.

1E. Top right corner. The peeping tom with binoculars on the crescent moon is in the sitting section. He first appeared in the 1960s on souvenir decks made in Japan perhaps by DNP, Dai Nippon Printing Card Company.

2A & 2E. Playing the Bells and Banjo-like instrument. There's also a drummer and a clarinest in this series. He's in the percussion musical joker section. He's the Coeur brand from East Germany (thanks Tom VB for steering me). It was set up after WWII in Altenburg.  The joker first appeared in 1947. Post Cold War, Coeur and the company, "VEB Altenburger Spielkarten" were bought by F.X.Schmid (Munich) and more recently by "Ravensburger Games" (source: GuntherAnderson)

2B. Beeboy! I have examples of Beeboy in my Flyers section that go back to the 1800s when he was published by the New York Consolidated Card Company, then by Consolidated Dougherty, and most recently, as in this example, by the US Playing Card Company.

2D. Bicycle Joker. The Bicycle joker dates back to the 1800s with few changes. The Bicycle brand was one of the founding brands of the US Playing Card Company. There are dozens of variations in the bicycle section.

2E. Strumming a banjo or some stringed instrument. See 2A above to hear about his East German heritage. He's in the strings section. Now that I've confirmed that he's partners with 2A and others: I should move him to the Musical Ensemble section.

3A. Truco. Tricky in English.  He is a Spanish Fournier standard factory joker, very popular.  He's in the performing with cards section since he seems to be slipping card out of his sleeve.

3C. The puppeteer card king with the king and queen as marionettes.  This is a New York Consolidated Card Company Joker, one of my favorites.NY65 Bee French Whist #69. Hochman P 63. He is the jesters section, subsection performing with cards. I think he's marvelous. That's why I put him in the middle.

4A Walker  performing with cards and with a jesters wand. Belgian made (It says so on the joker).  I have at least seven variations and since one of them has Amstel on the back,  I'm wondering if these are also by Léonard Biermans from Turnhout, Belgium.

4B This well-dressed The World Joker soldier is part of a British company (I think), he's published in British Hong Kong. He has a green jacket, red pants, a banner proclaiming The World Jokers, and a sword. He's in the jokers with swords section, one of many variations. World jokers appeared in the late 60s-70s through today on souvenir and custom decks made in Hong Kong, China and Taiwan. It’s hard to pinpoint one maker.

4D Standard standing jester. I think of him as the most standard of jokers.  He's a USPC joker, most often on Gladstone, Hamilton, and store brands on bridge decks from the 1930s through the 1980s. (thanks Chris Turner of 52Plus). Of course, he's in the Standard Jesters with Wand section.

5A Modiano making the shared secret jester gesture. He's in the Heads with Hands but no wands section. Modiana. Trieste, Italy. c 1950

5E Half a Jester. Piatnik.  Busts with hands holding a wand.

6A Hallmark dancing jester. I have five of these in the jesters dancing section.

6C Cross legged seated jester holding up a card.  Printed in Vienna (Vien) by Ferd. Piatnik and Sohne. There's maybe a dozen of them in the jesters seated section, facing forward.

6D. Jesters chasing their tails in a circle. This two headed joker is the Standard Western Publishing joker. Printed on one side of the joker: "MADE IN U. S. A., W.P. CO., RACINE, WIS, No. 1876 Portraits". It was manufactured before the era of two letter state abbreviations. I think they were numbered sequentially in order of publication.  "Portraits" probably refers to the name of that deck. The lowest number deck I have is "No. 28, Sitting Pretty", the highest is "No. 1901 Frou-Frou." I have over two dozen of them in my Topsy Jester section.

6E The seated juggler is a newer design from the 2000s, found in Chinese  souvenir and custom decks.  The sharp lines show it’s a current day digitally drawn image. He's reminiscent of the Chinese BirdMan joker and is the same section and subsection: Seater Jokers, Sitting Sidesways.

This article relates to the ones on: