The ARRCO Playing Card Company was started in 1927 (or 1930) in Chicago and was independent until 1987 when it was purchased by USPC.  ARRCO started as Arrow Playing Card Company by Theodore Regensteiner, who also invented the four-color lithograph press.  In 1935, it became ARRCO and became a national leader in quality playing cards.  ARRCO cards were a major brand into the 1980s when it was folded into USPC. To this day, stop by any drug or other store, and it seems like the ARRCO brands remain but now as a bargain brand.
(Primary sources included Hochman, the World of Playing Cards, and an article by EndersGames published on PlayingCardDecks.com about the history of ARRCO. Detailed below)

The first jokers mentioned in the Hochman chapter on Arrco P151 is MSN1a ARRCO Playing Cards, c1935 with this joker.  I have him in the Jokers (not jesters) Standing section. I have three different versions.

On P152, the first joker is Arrco c1943, MSN2. It features a clown head and is a wide or narrow deck produced for sale in USO canteens during WWII. I don't have him: I did accidentally buy a cheap knockoff of him I keep in my FAKES section.
Next is MSN3 Centaur, ARRCO C1940.  I have him in the horsey or equestrian joker section. The last joker pictured on Hochman P152 is Head. MSN4a Enardoe.  By Edward Drane & Co, Chicago. c1932.  Could this be the origin of this now very popular Clown Head joker?  Here's the Hochman entry which says it was "almost surely made by Arrco". I have this Clownhead in my heads section. 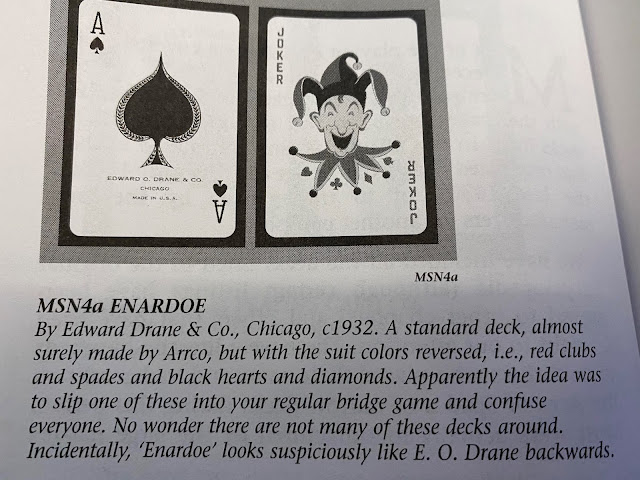 Also on P153 is MSN15, Brown & Bigelow. St Paul, c1945. I have her, which I might rethink, in the Illustrated Erotica section. She's cute but I'm not so sure she belongs there. 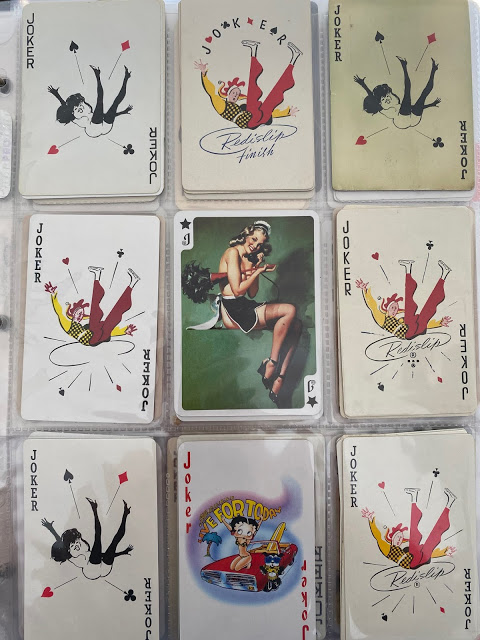 (more ARRCO jokers to photograph and collect...)
On P154, three jokers listed. I have Antlers and Luxor, not Monte Carlo.
P 155: I have Criterion and Permantite, not Carlotti.
P156. I have both KEM and Gibson.
P157: I have Classique, Minerva, and Diana from Gibson (currently in my American people section) I also have Bigson
P158: High Stepper. I don't have Finesse or Scottie.
159-62: Over 50%
Other ARRCO jokers in the collection (but not mentioned in Hochman) include:
A Century of American Progress. 1933. Chicago. When the World's Fair came to Chicago in 1933, ARRCO launched this deck which was a huge marketing coup. It echoes the success of marketing at the Paris World's Fair in 1989 by the New York Consolidated Card Company commemorated and promoted by their Gold Medal joker. He's in the Americana section with the other world's fair joker. 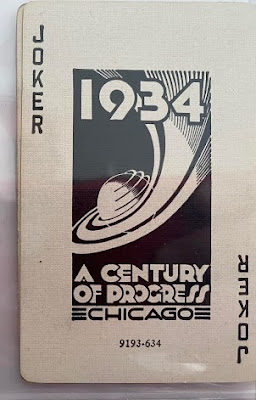 Known as "Throwny", this ARRCO joker is in the sitting jokers front facing section. I have at least five variations of him. 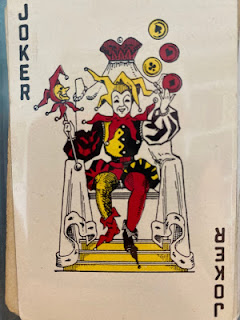 These ARRCO standing jokers are in the standing jesters with wands section. I have five variations. 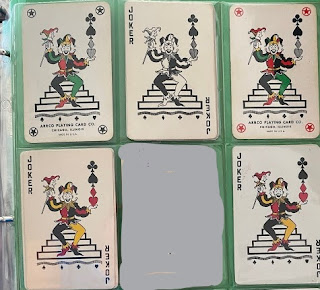 Hochman is where I always start. There's a chapter of the Hochman American Card Encyclopedia entitled "Narrow Cards" which focuses on the Bridge Era of card playing in the 1930s. Unlike poker and other games where players had around a half dozen cards in their hand, with bridge, players started each round with 13 cards in their hand so it was preferred to have narrow (not wide bridge-size) cards.

I'm confused by this "Narrow Cards" chapter of Hochman because it reads a like a history of Arrow and Arrco cards.

The World of Playing Cards and an article by EndersGames published on PlayingCardDecks.com about the history of Arrco

Here are the other articles about my early American manufacturers jokers. Note that this article, like a number of them, is a work in progress in which I'm looking at my joker collection which is organized by visual themes and look at it by manufacturer and history.