With over 1500 different playing card jokers, I recently faced up to trying to organize the joker collection. The challenge was to create an overall approach to organization that met my basic rule that I should be able, just by looking at a joker, to know where it belongs in the collection.

EDITOR NOTE, OCTOBER 2017. This article is now outdated. . Although it is less than a year old. I have made a great deal of progress since then in organizing my jokers and in the number of joker. The collection is several times larger today than when I wrote this. And I've refined the organizational system considerably. Here is the best description of the current organizational system. However, I maintain this article in its original form since I think it captures the thrill and excitement that I felt in developing an organizational system.

Think about it for a second, jokers can't be put in alphabetical order. Sequential order doesn't make any sense. Most jokers are printed with the same four colors as most decks of cards: black, red, yellow, and blue. So how can I organize jokers so that I know where they belong? By colors? By country of origin or manufacturer? Neither of these fit the basic rule that drives me.

My basic rule is the system should be simple enough so that just by just looking at a joker, I know where it belongs in the collection.


A Taxonomy of Joker Playing Cards

As far as I know, there is no existing taxonomy of jokers that meets my basic rule. Could I be the first to create one? Could a set of joker themes be created?

I looked around the net and couldn't find any system and so I, with some trepidation, took it upon myself to try and create the world's first joker organizational system.

I considered a vast number of different categories or themes for organizing jokers. Some themes  I adopted, some I discarded. I probably adopted some that will over time have to be discarded or adjusted. But over one weekend, I came up with the following joker organizational system!

I found it to be creative and intellectual work. It was somewhat solitary. Oddly, nobody else seem interested in working with me on it. I probably put 25 hours over a weekend into the organizing process. I have rarely been happier.  Here are the themes or categories that I selected.

Here's the list of joker themes again with a page of examples for each category...

Animal jokers. Animal jokers has many sub themes such as bird jokers, canine jokers, feline jokers, equestrian jokers, and eventually, there is just a miscellaneous mix of other animals.


Topsy Turvy jokers. These jokers are perfectly symmetrical so there is no way that they can be upside down. Since I really like this theme, I decided it trumps other ones so animal topsy turvy jokers go into the topsy turvy section, as do topsy turvy jesters, topsy turvy characters, and topsy turvy advertising.

Jesters Standing - Unlike the previous section, these jesters are standing and primarily stationary. But they are not boring. And being theatrically dressed does not qualify them for being in the performing section.

Jesters Sitting - They're usually on the ground or a barrel, rarely on chairs.

Jesters head shots or just the top half -

Christmas Jokers - This seemed like a great category but it's actually really thin. I only have one page. In contrast, other sections have 10 or even 20 pages. I could just fold this into the character joker section. At one point, I thought about having a holiday section of jokers since there were a few jokers with Easter Bunny themes. But I put them in animals. For the moment, the Christmas section exists.


Clowns - Clowns of course are not jesters. They are clowns. Some people create jokers with clowns on them. I don't know why. And I don't think they should. I've thought of excluding clown jokers from my collection but it didn't seem to make that much sense. So I've let in the clowns. But  I'm aesthetically offended by clown jokers.

Art - This is a tricky theme in that it is very much defined by the "eyes of the beholder", ie me.  There are many jokers that I have decided are works of art. There are others, which while aesthetically pleasing, are classified elsewhere.   Only time will tell whether I will be happy with this category and if I'm not, whether I will discard it.  The overlap is often confusing. For example, do historical jokers with statues on them count as art of history?

Chinese jokers - I bought a few years ago several hundred from China and put them in an album without much organization or attention.  They are in a separate album. However, Chinese jokers that I have since collected are mixed in elsewhere, this is room for overlap.

Advertising and logo or emblem jokers - This seems to work combining these two themes together since while many emblems are abstract, many are commercial.


Cycling and Congress Jokers. Given the dominance of the US Playing Card Company and their Bicycle Brand jokers, there's are a lot of these.

Jokers of History - This was a tricky area to define both because it overlaps with art and includes a sub theme of "classic" style jokers such as a man with a top hat and cane dressed in the 1920s style.


There are more themes but that might be enough for now.  There are some theme ideas that  didn't make it through the organizational process such as cheesy jokers (ie, ones that I think are poorly designed) and food jokers (I only had a few).  I tried organizing by colors and a few other approaches that didn't work very well. I do have an odd size and shape section.

The collection is organized in plastic trading card pages in a 3 ring binder, each page holds 9 jokers. Prior to the big reorg, while each page on the joker collection was cleverly organized around a theme or aesthetic, there was no overall system.  In the big organizational process, I came up with about 20 overall themes and organized along these themes.  But some themes did not work out and often, jokers would fit often into multiple themes. So I had to come up with a system of priorities.  For instance, one theme was topsy turvy jokers, jokers that don't have an upside down. Another theme was animal jokers. What about topsy turvy jokers with animals? Well, I really like the topsy theme so I decided it trumps the others.

My next step is to put 2-3 pictures of joker pages on each of the above sections to illustrate the theme, then to create a full catalog and count of each theme. I'd also like to upgrade my picture taking which is too often, done with my cell phone. Today, I'm experimenting with using my scanner.

Extra jokers! I could of course note which jokers I have duplicates of and would be open to trading with other collectors.

I might by having the first joker organizational system, become famous! Will it be named for me?  I might be able to create the first real bartering system in which people can communicate and look through each other's collections in a reasonable way. (BTW, I'm very open to large buys of jokers at this point, I have some serious momentum and interest in building the collection).

The Organizational Project - What was really going on?

The weekend might have involved twenty hours of work. Or forty.  I finally got the joker collection organized.  It started by me trying to integrate the nearly 200 new jokers that I had recently acquired into the collection.

What I intended this journal entry to be about was that it's now Monday morning and I have a vast backlog of work of the other type, my day job work.   There are massive organizational projects to do there such as reorganizing a web-site's organizational system to improve user experience. It's actually the same sort of hard conceptual thinking project but I'm having trouble getting as excited about it because when I'm finished, I have to test it against the opinions of many colleagues, the rigor of several alternative logics (scalable, understandable, intuitive), and ultimately, whether the users like it and respond how we're hoping...

To be honest, the intensity of my creative intense work experience this weekend was probably fueled by escapism from not having to deal with redesigning the navigation system like I told everyone that I would do this weekend. Sigh.

I'm now writing a confessional. Do you think I can turn it in as my homework?  While it would humanize me to my colleagues (Hardly an issue...admittedly), it would not solve the fact that people were depending on me...OK Enough!!!!
Posted by Johne at 11:03 AM 5 comments:

I've been bidding on Ebay on lots of jokers. I might have bought a hundred in the last 60 days. I win about 50% of the auctions that I bid on. For me, going to the office is now a lot like Christmas since there are often new joker packages arriving every day.

Here's soem from today. I'm particularly excited by the monkey jester, the top left one.  He's holding a bauble of a traditional jester head which I think is very clever.. 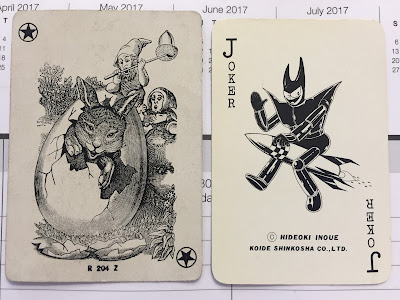