While I am primarily an aesthetic joker collector (ie, I like the pictures and I organize the jokers by the way that they look), I’ve recently grown interested in card and joker history and in assessing my collection in terms of significant historical jokers.

I'm focusing on American jokers and while I’m enthralled by the research, it also makes my head hurt.  I'll publish this although I have more research to do and will update it as I go.

I'm doing most of my research using three sources:
-    The Hochman Encyclopedia of American Playing Cards by Tom and Judy Dawson. C 2000.
-    Paper Empires Vol I by Jason McKinstry. C 2019
-    The World of Playing Cards website. WOPC.co.uk
I'd like to express my deep thanks to those who create such quality reference works. You are, in my book, superheroes and celebrities.  If I ever get to meet you, I'll ask for a selfie and be proud to have taken it.
My Dougherty Cards - This article will focus on Dougherty jokers: there are also articles on NYCC jokers,  USPC Jokers including Bicycle, Congress,  National Card Company, and Kalamazoo, and Perfection too.
Andrew Dougherty - He was born in Northern Ireland in 1927. He moved to Brooklyn with his parents when he was still a kid. At 21, he started a card-making company and then made some history.  More about him later.
Here are the Dougherty jokers in my collection in the order that they first appear in the Hochman Encyclopedia of American Playing Cards.  Dougherty published as an independent company from 1848 to 1907.
This Little Joker looks like the AD11 Little Joker, a Dougherty Triplicate No 18 deck c1878, P70 of Hochman, P55 of Paper Empires. She's in the Jack in the Box section which is in the Heads on a Stick section.  My copy of it is not in great shape, it was glued at some point and the glue is still there. Nevertheless, I love this joker. Notice the king in the little girl's hand! 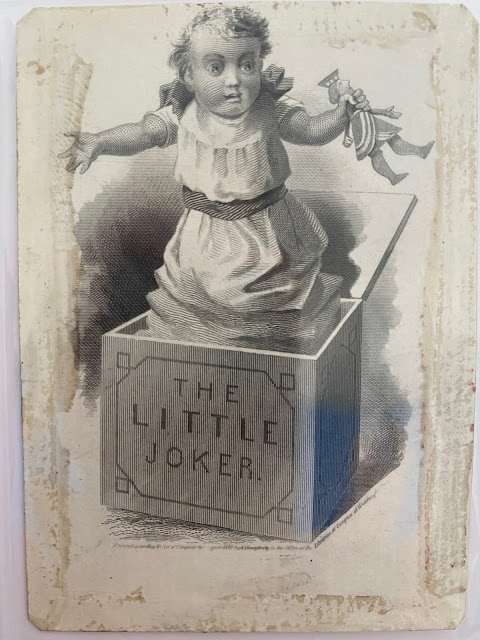 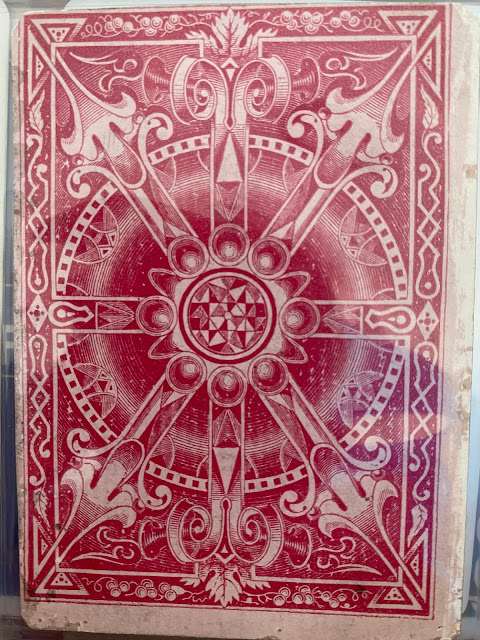 This Jolly Joker below matches Ad12, Triplicate No. 18, c1876, Dougherty on P71 of Hochman and P54 of Paper Empires. She's in the hands but no wand of the Heads and Busts section. Interesting note: the first PM that I got about this post commented on my using she to refer to "the character peeking through a hoop".  Funny that I hadn't really though about the gender until Dan mentioned it. Since the character has make-up, I immediately thought it was feminine but really, as a circus clown, it's more likely a guy. Whatever the gender, this joker achieved fame as 3B in the joker poster. 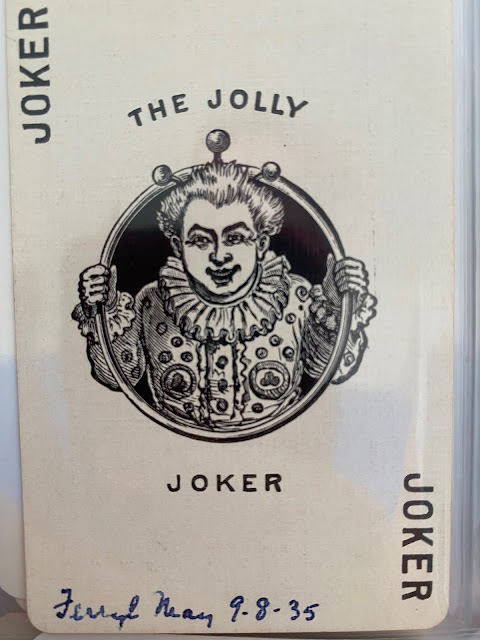 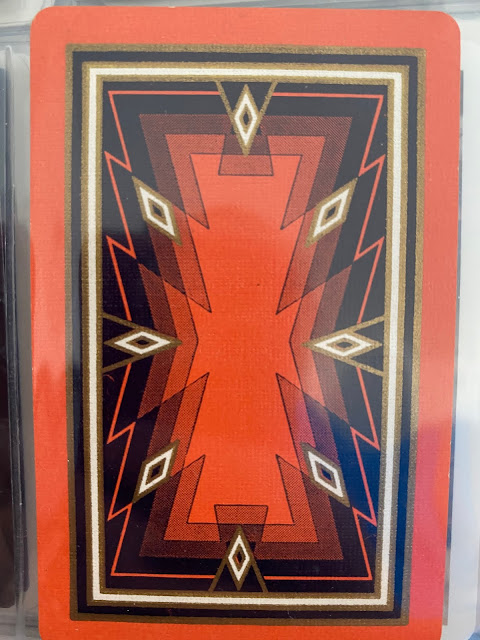 This two-head clown jester (alt terms: Topsy Turvy, mirrored, or duplex) appears on Hochman P77 as Ad 15 Indicator 1884. Of course mine is in color and Hochman shows it in black and white. This illustrates part of my gross ignorance. Were the original cards in B&W at that point or are they just shown by Hochman in B&W to save on printing costs?  And how do I tell if this is from that original AD15 Indicator P72 run  or the P77 Ad37 Climax #14 run or a later one? He is in the Topsy joker section. 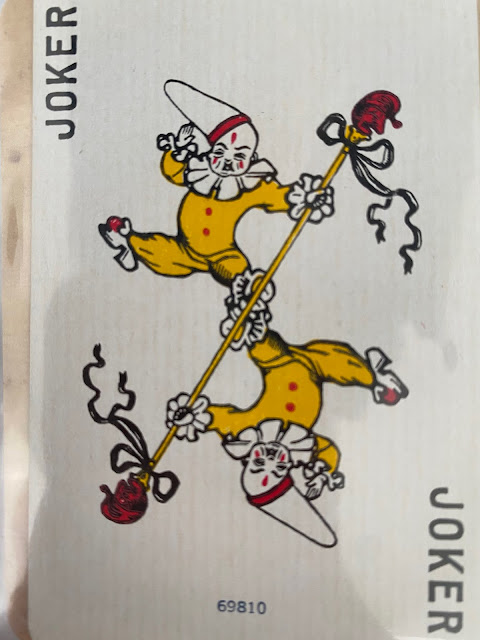 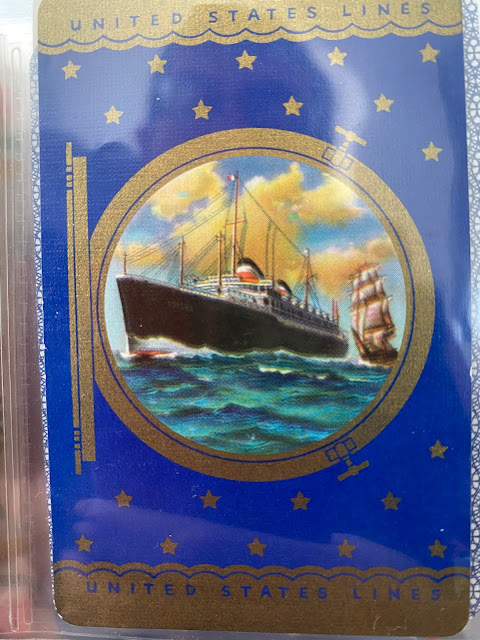 On P74, Hochman shows a rooster joker that matches one of mine and a Tally Ho joker which I have tons tons of, most of them bought new in the last few decades (no reason to show my modern Tally Ho's).
The rooster is Ad24 Steamboat #0 and in the Animals section, flyers subsection. 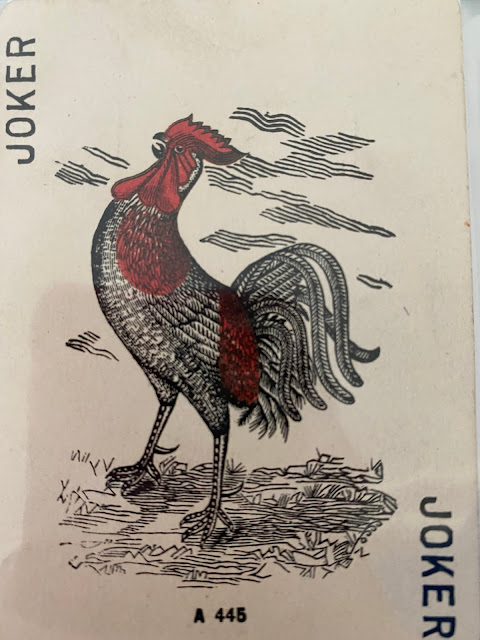 This Victory Rooster tagged along and got his picture posted too although he's basically photobombing this post. 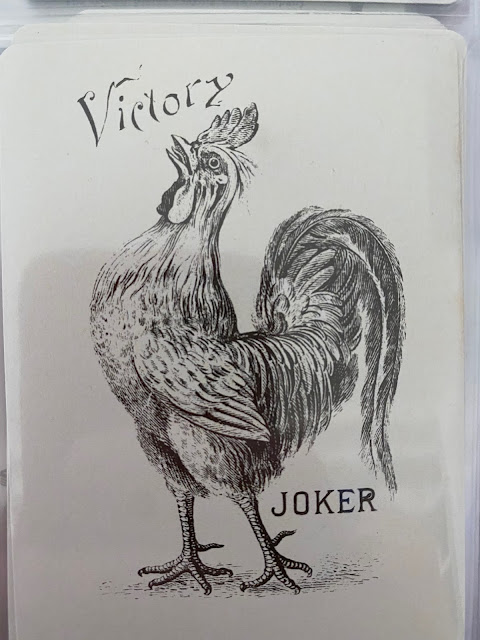 This blossom looks like the Ad40, Marguerite No 130, c1910, A Dougherty on Hochman P77 and  on P62 of Paper Empires.  She is in the Jesters Section,  Heads/Busts subsectionection: Jokers on a Stick subsubsection. 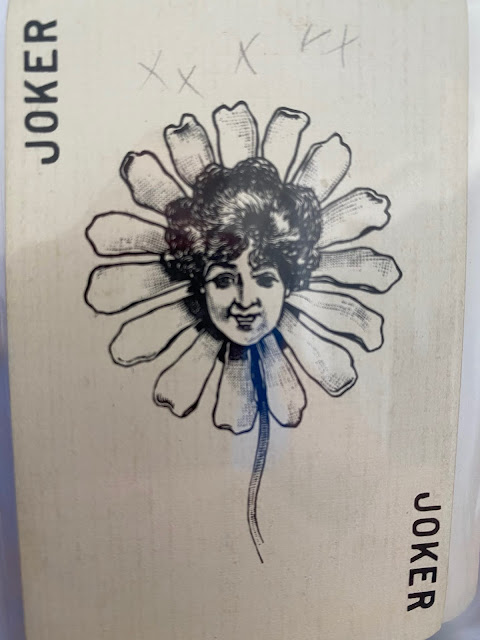 Could this back be the Flower Girl mentioned as a Maguerite back on P77 of Hochman and P63 of Paper Empires? 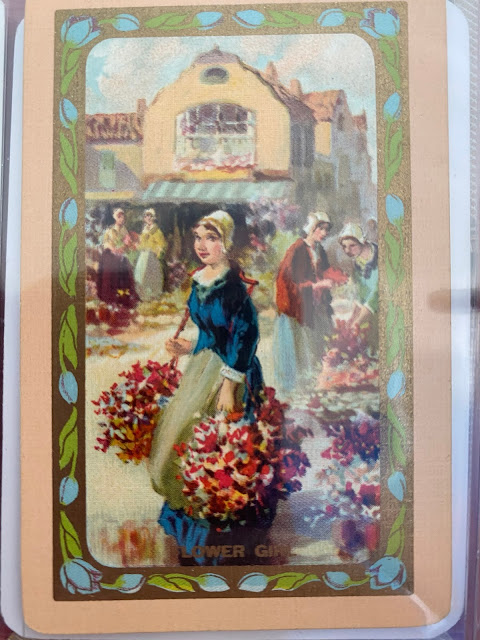 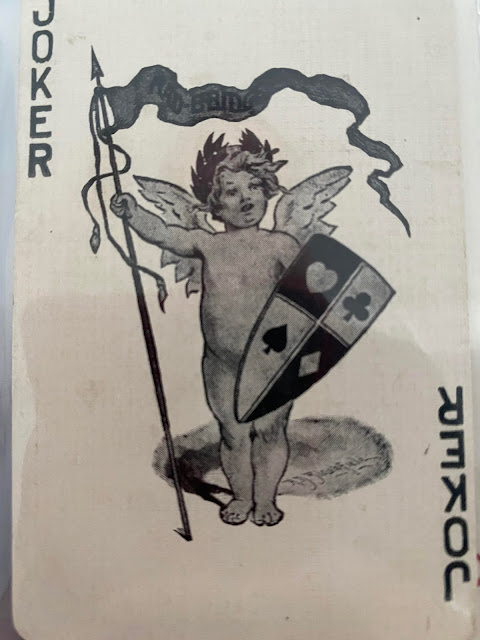 Doughert made technical and design innovations. He developed and patented a printing press for cards that could do four colors at once! Think about all this royal cards printed with black, red, yellow, and blue.
He also developed and patented the Triplicate and Indicator corner indices o it was easier to figure out what cards were when they were held.
He greatly prospered ultimately giving the company to his three boys in 1896.
USPC bought Dougherty in 1907. Dougherty remained as an independent subsidiary until it was combined with NY Consolidated Card Company to form Consolidated-Dougherty. For dating cards, this sequence matters since joker designs continue through the years with only some details or copyright information changing. Online sources about Dougherty? The World of Playing Cards and The World of Paper Empires.
To see my other articles about American historical jokers.

Dougherty
NYCC jokers
USPC Jokers including Bicycle, Congress
National Card Company,
Kalamazoo, and Perfection too
Also: The History of the Joker, the Ace of Spades, and the Stamp Act

This project is iterative (OK, chaotic) with me first looking for old looking jokers and then going to the sources to identify them.   This is much sorting and research for me to do: any and all help and advice appreciated.  Of course, click to discover my overall organization of jokers into ten graphical themes. And feel free to use it although I insist on a call out or attribution. Specifically, consider it to be available under a Creative Commons CC BY license.

This license lets others distribute, remix, adapt, and build upon your work, even commercially, as long as they credit you for the original creation. This is the most accommodating of licenses offered. Recommended for maximum dissemination and use of licensed materials.