The Congress Jokers (updated Sept 2021), a historic and popular USPCC brand. Another popular brand are the Bicycle Jokers.

First, a mystery. Is this "Congress Joker" part of the  Congress brand and if so, why is he not mentioned in Hochman? 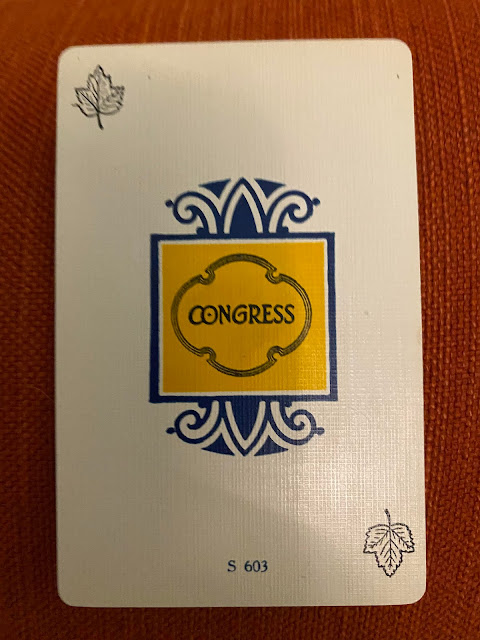 I've read on the Congress Guy's website that the Dundreary joker below was the original Congress brand joker from 1881 to the late 1890s.  Here is my Dundreary with its back. BTW: I'm not the one who drew on it with pencil. I'm also not going to be the one to try and erase it. It is what it is.
Then there was the Matching Era when the joker matched the back and was not an original image. The Matching Era is exemplified by the Moon Fairy below.  (I've heard there was a matching Dundreary joker but I've never seen it and certainly don't have it)
The Moon Fairy joker (below) dates from 1899-1901, it's also described on the WOPC Congress article (source an article by Simon Wintle from June 2010 on The World of Playing Cards).  This Moon Fairy joker was part of the Congress brand.
But I don't keep the Moon Fairy with my Congress Jokers, it is grouped with the other characters sitting on crescent moons.   This is an important principle that distinguishes my collection from most others. I mostly organize by visual themes: others mostly organize by brand, publisher, country, and/or era.  If I was more educated and had a better memory, I might do it the other way. But I'm not. I just organize by the pictures. 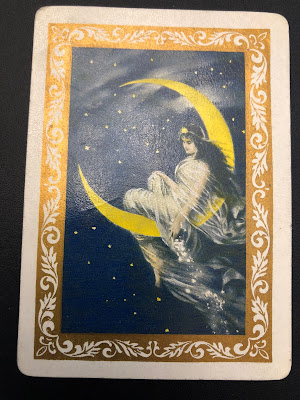 Around 1900, Congress switched to putting a picture of the US Capitol on their jokers.  The World of Playing Cards website has some historical info on these decks. But the best information on the joker sequence is from the Congress Guy's website. He says that this joker below was in use from 1904-1910. Notice the roads in front of the Capitol and how wide the joker is. 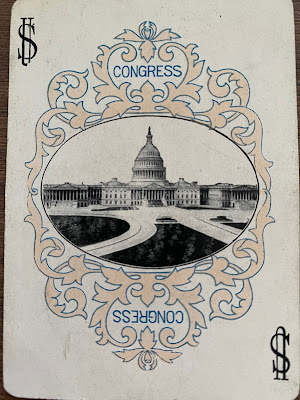 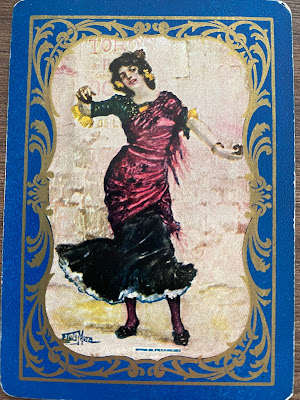 See the writing by her feet? I couldn't make it out so I took it to the High Counsel (Djos Dury, Matt Schacht) on the Joker Collectors Club. On the right it says: Copyright 1904 by the USA card co.” The card deck is called Spanish.
The painting turns out to be signed on the left by F. Luis Mora (1874 –1940)  a Uruguayan-born American figural painter who painted some spectacular portraits of women. Step aside Toulouse Lautrec, I think Luis is the bomb! 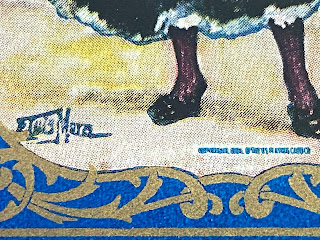 This is next joker to be used. It's also a wide joker, notice that the roads to the capitol are now shown  in the picture. On the back, there's a lady named  Berenise, more about her later. She was used from mid 1901s to the 1920s. 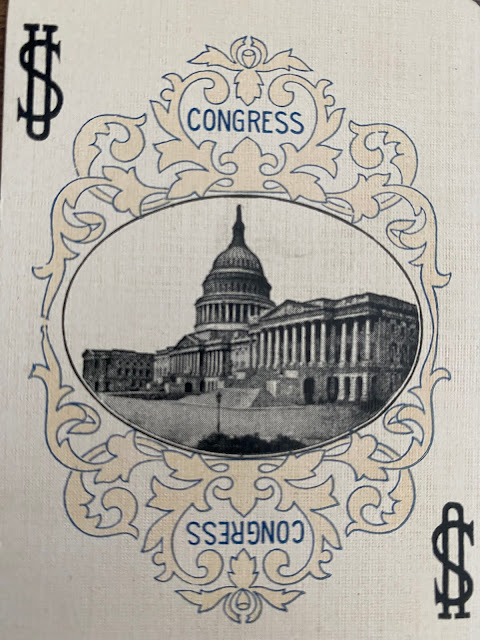 Am I the only one surprised by the display of a bare breast complete with nipple on a product that was presumably mainstream and sold in all the fine stores from the start of the 1900s?  Or was this a racy illicit deck sold through some alternative not-so-reputable channels?
The answer, explained to be on a Facebook group, is that is based on a classical-style painting by Luis Ricardo Falero in 1886. Many Congress decks used the painting in its original format. My version from maybe 1890 is the more modest one where she is draped covering her lower regions. 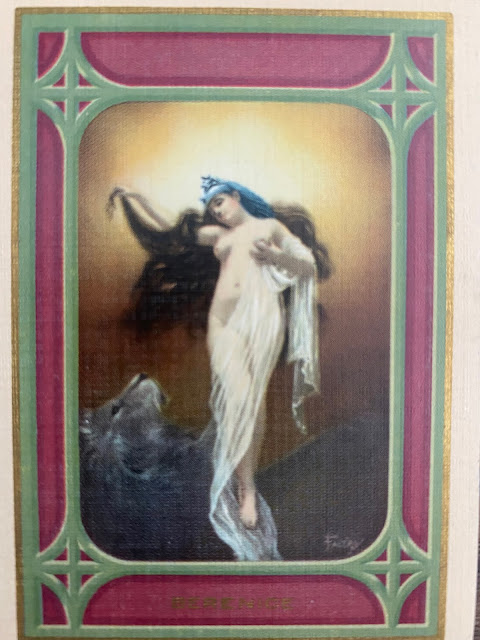 The next two are from the 1920s. Notice that Congress has gone to narrow cards like most everyone else based on card games that meant players had to hold more cards in their hands at once. 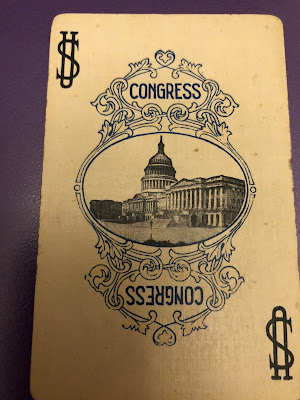 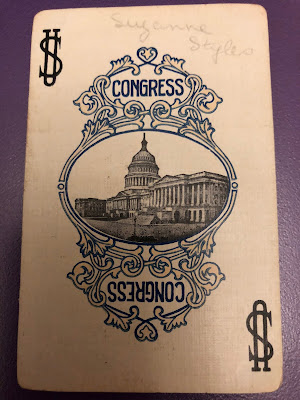 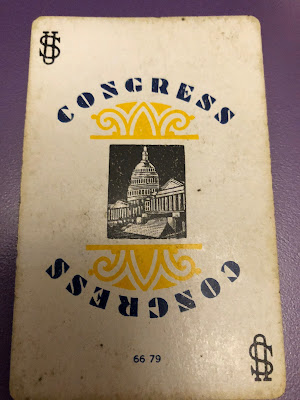 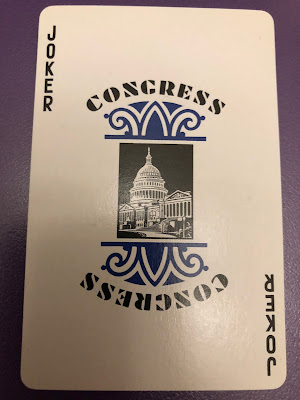 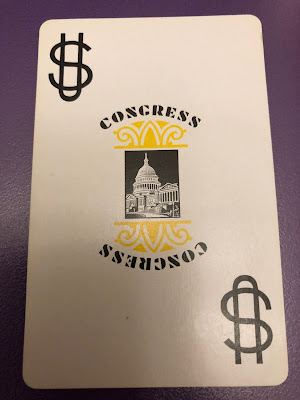 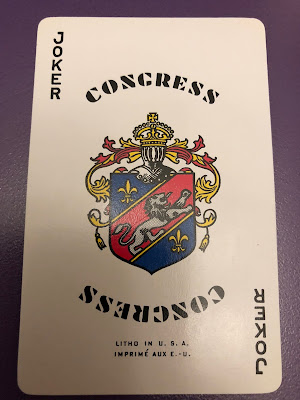 Here's the ensemble shorts of the 37 different Congress Jokers in my collection (as of 9-6-2021, updated from 27 different  8/2020). Due to popular request, I'm showing the backs too.
In this first set, notice the different road structures into the Capitol Building. The middle row on the right has the roads approaching it. Also, quite a different picture of the Capitol. The bottom row middle is like that too. The middle row middle jokers is from Canada. 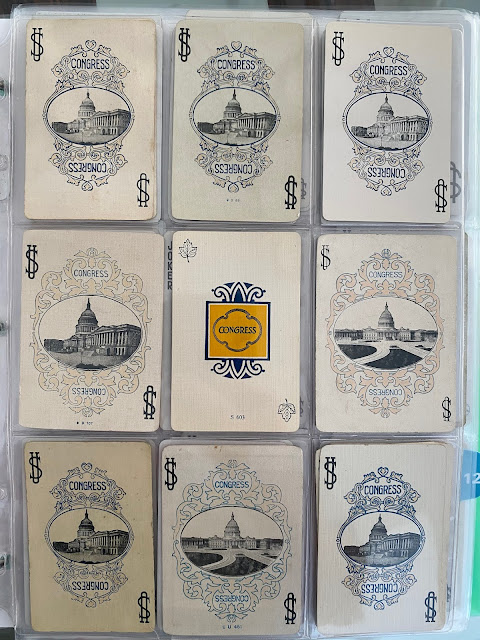 A quick note on matching the jokers with their backs. They are in see through plastic pockets. The front of the page is the jokers.  The back is the backs. This means that the joker from the top left above is shown below on the top right. Her name is Melissa. Bernice, below, in the middle row on the right is the back from the joker above in the middle row on the left with the tiny letters on it of  • D 107. (the dot means that I can't even make it out with a good magnifying glass) 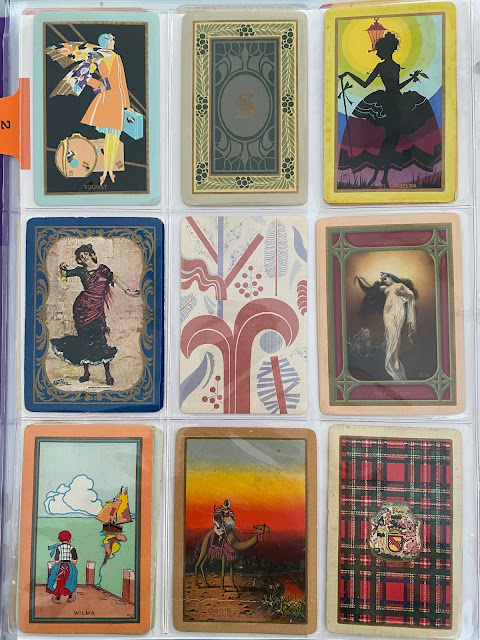 Does anyone know any about the Congress jokers here with the coat of arms with the medieval helmet at the top, the pair of fleur-de-lys designs, and the lion? My guess would be they come from Montreal, St Louis, or New Orleans based on the French connection. Anyone? 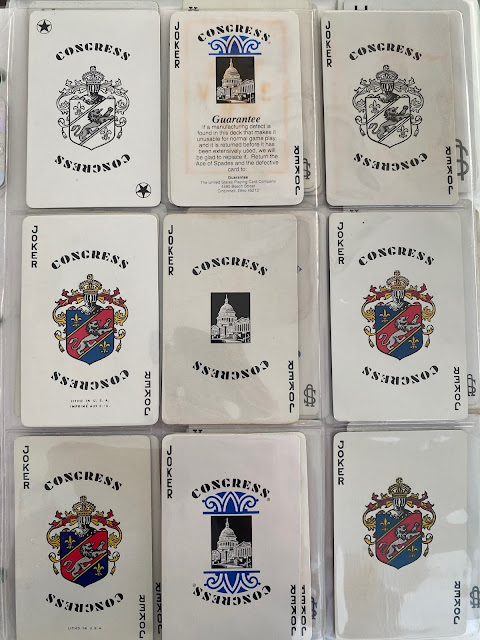 Notice in the bottom row left of hte backs below, there is a more ornate medieval coat of arms. It's even more French with the "Dieu est mon droit" inscription (God is my right) and some other words that I should take a closer look at. Frankly. I've never really understood what Dieu est mon droit means. Is it a claim to religious freedom that each of us has the right to our own religion and god?  Seems unlikely since the French are not so much on board historically with freedom of religion. Maybe it's a claim that God is our side? 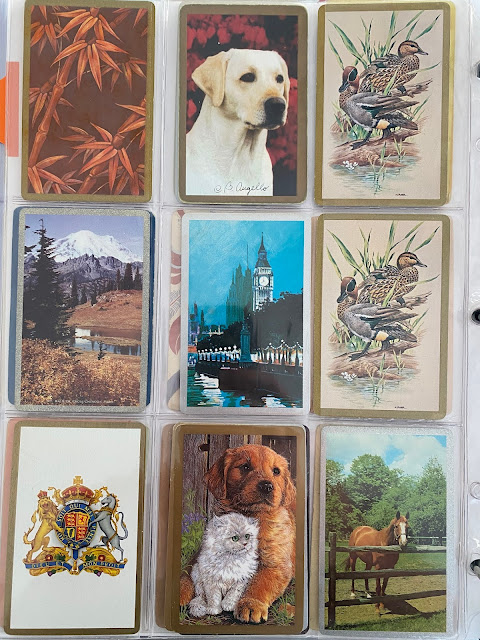 While these might be too small to tell, the view and details on the building change as does the text on the word "Congress", the design around it, and the corner indices. 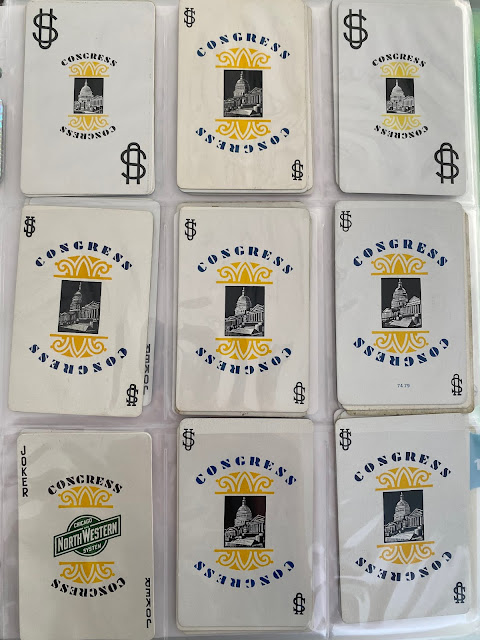 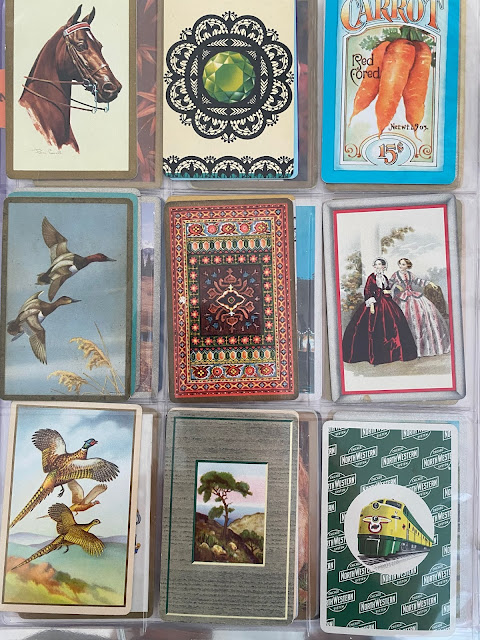 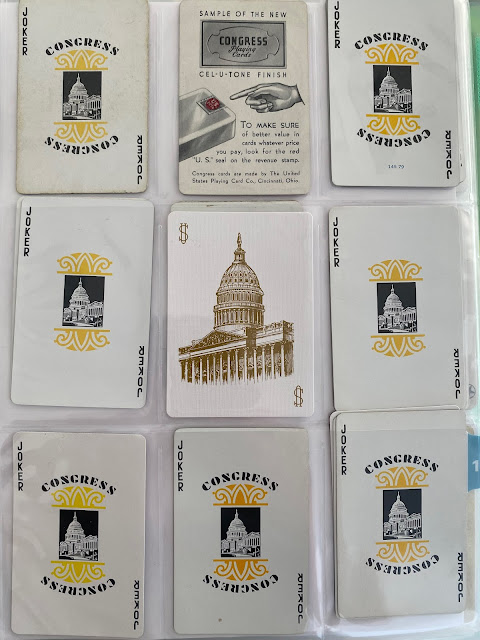 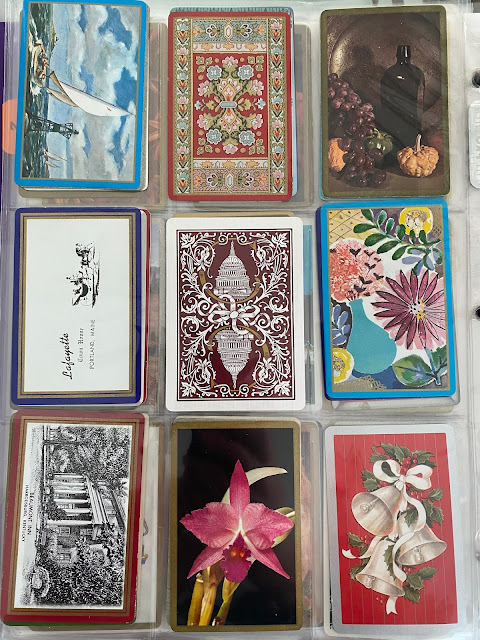 Here's the 37th of my Congress Jokers and its back. 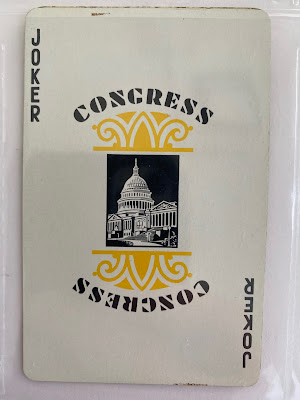 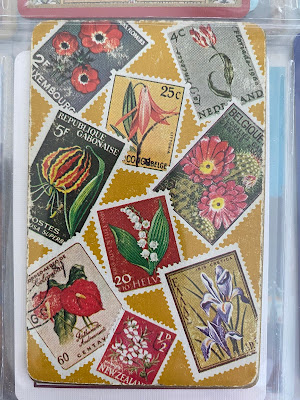 A few last things. One, another call out to the great Congress Guy's website. The article on the history of the joker is fantastic as is the one where he identifies the rarest ten Congress decks. The Congress Guy  is Kevan Seaney  (I'm John in case anyone was wondering).
Secondly, inspired by Congress Guy, I've started scrounging around in my extras, looking at the backs of duplicate Congress jokers. No sooner did I start looking then I totally fell in love with the queen and king below. 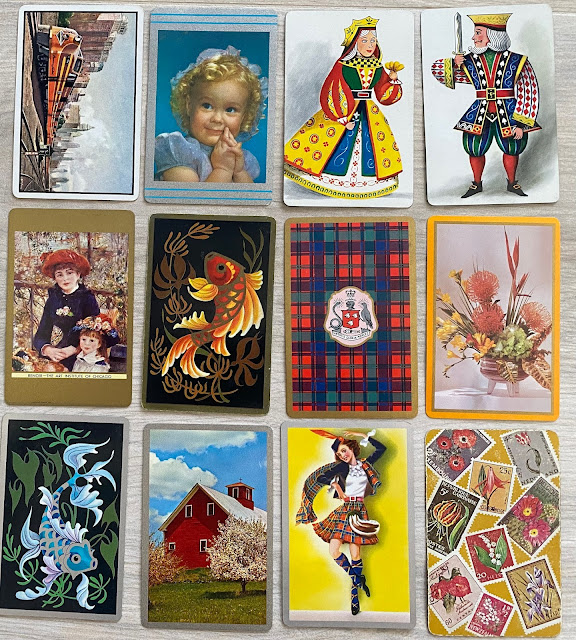 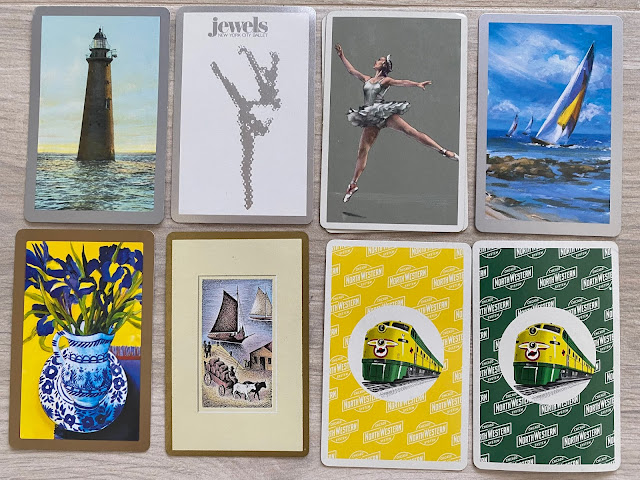 Want an idea of what jokers to look at next?  Here's a summary of the travel subsections of the joker collection: now all online and counted!
The total is 354 travel jokers (June 2020).
Here's a link back to the  overall joker organization. Or you can visit a page about the history of the USPCC or an article about the Bicycle Jokers.
Posted by Johne at 9:07 PM