I posted a picture of this joker to the Facebook Joker Collectors community looking for information.  This community is like a senior wise council of joker info and trivia (plus some crackpots and newcomers and dilettantes, like me!).
Ask any question about jokers or cards or companies that make cards and you'll get an array of interesting insights. I learned from  the group that the joker below is from 1896.

The above is true. That is what happened. However, a week later, I was privately messaged and told:

I fear that you have been misinformed.  The 1896 version had a star inside of a circle in the corners.  Yours has the interlocked US (the S is superimposed on the U). Also, the 1896 Joker has "The National Card Company" where yours says "Five Hundred".  That substitution was made in 1910. Also, the #13 was added in 1925. I would date your deck to 1927.  Also, looking at your Ace of Spades, it says Russell & Morgan which also points to 1927.     Paraphrased from info from Brad Starnes

So the group is wise but not infallible.  What did I expect?
Moving on to my collecting changing: These three Brownies presents me with a tricky taxonomy question. I had initially put it in with the other USPC - US Playing Card Company - cards such as the Bicycle Jokers and Congress jokers which have the overlapping U and S in the index corners.
But since then, I have switched to primarily a thematic organization and now my Bicycle section is not presented just as a USPC brand (like Congress).  So now, the Brownies, who are playing cards, are in  the Card section of the collection.

Here is its back. 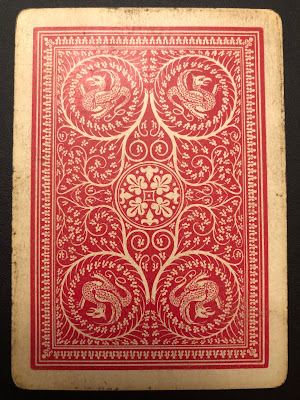 I remember buying this deck on a trip between junior and senior year in high school. That would have been 1975 in upstate NY.  In fact, once I found out that the deck was that old, I started searching for the whole deck and I found that I still had the entire deck.

It's an interesting deck since it was for a game called Five Hundred. The deck has all the regular cards from ace to king.  They look pretty much like the modern design although there are some subtle changes in the king's design. 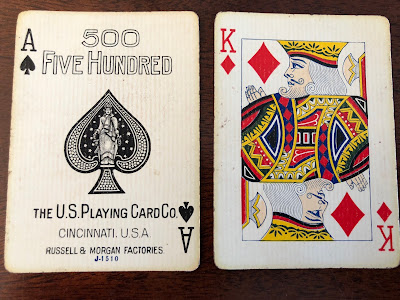 But there are also an eleven, twelve, and thirteen for each suit. So instead of fifty two cards, there were sixty-six. 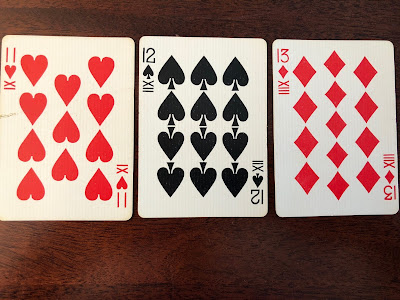 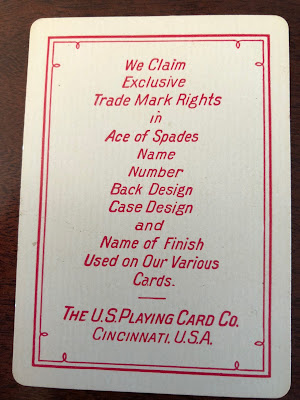 Here's the info provided in a Facebook "Joker Playing Card" Group discussion of this joker and deck:

Paul Bostock:  The design (those 'imps') looks like National Playing cards. I checked Hochman <Encyclopedia of US Playing Cards> and it is Nu13 1896. At that time, National had recently been bought by USPC, hence using their letters on the Joker.

Chris Turner:  National or USPC joker from the special deck for the game 500. These are originals. Look at the vertical lines in the finish of the paper stock. Newer cards (after 1960s) do not show those lines with age.

The Griffin back seen here is the most commonly found. Other backs included a swastika from when that symbol was considered a sign of good luck. Deck made in red and blue. Slip cases with gold embossing first, then later, a larger tuck box.

500 decks of all vintages are still out there at the junk stores and estate sales — and rarely are expensive. Finally, it is a wonderful game. The favorite at my house. Four or five players use a standard deck with one joker; six players use the 63 or 65 card deck.

Dan Nordquist: The characters are the "Palmer Cox Brownies" who were popular cartoonish characters from the early 20th century. National playing cards created the "look" and was bought up by USPC as someone else said.

If you like the look of the Brownies, there are others around besides the ones sitting in a circle. Probably the greatest would be the Schlitz beer advertising deck that has them on the Joker. There are also some Joker pics that show them about to launch a huge snowball off a roof at other cartoon characters. And a second Joker that shows the aftermath of the snowball falling on everyone below. Those are all black and white. But the really rare one is a color version of them playing billiards / pool.

Here's the deck in its original case. 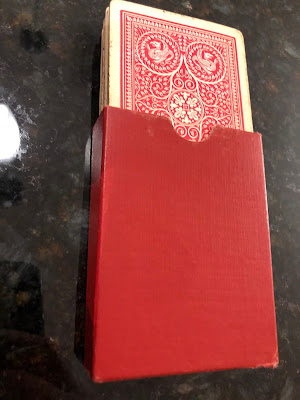 Here is the back of the copyright card notice which has the scoring system for both Auction Bridge and the Game of Five Hundred. 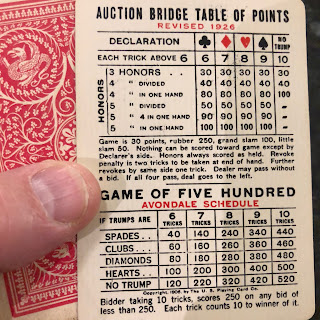 And one more view of the deck. 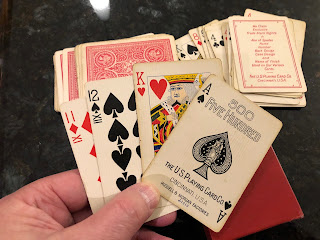 While I am going deep into my boxes of such stuff, here is another card package that I'm curious about. Anyone? I think I bought it at the same time in the same era.

There are two decks in a leather box with a snap. Each deck has gilded edges: one gold, one silver. There are also an array of score cards and rules books. The rules books cite the rules set by the 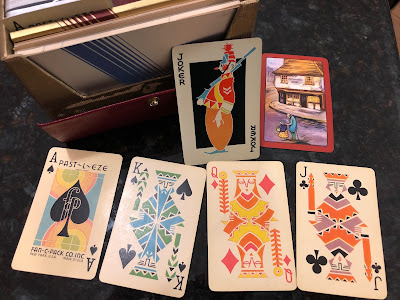 Here is the ace of spades. It has an art deco look to me.  I see the pun in the name "FAN~C~PACK" but I'm a little puzzled by the "PAST~L~EZE".
The joker is toy soldier reminiscent of both actual toys and to me, the toy soldiers in the Nut Cracker Suite. 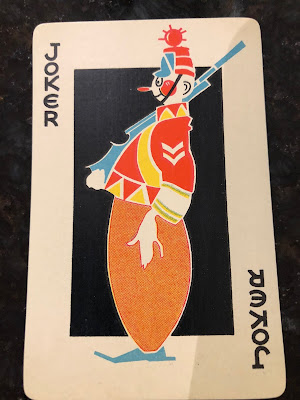 Here's the back of one of the decks. The other one is blue. It's marked the The Old Curiosity Shop. It looks maybe German or Dutch style to me. 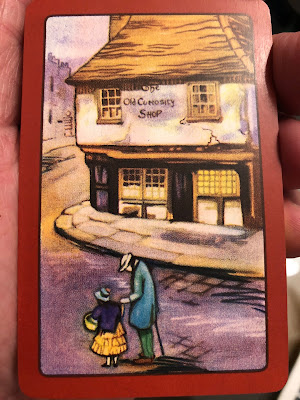 Here's an attempt to show the shiny gold edge. 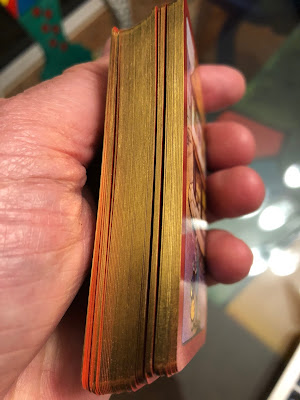 Here is a score card with some reminders about scoring. 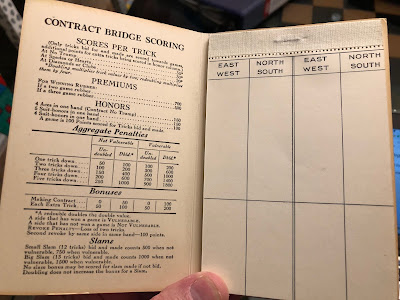 Here's an attempt to show the shiny silver and gold  edges in a top down view of the entire package. 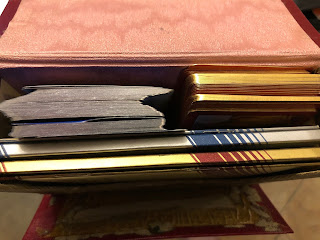 Joop Miller: Most of the info is on the AS: published as Past-L-Eze by the Fan-C-Pack Co. In the Hochman Encyclopedia (Dawson) they are dated c1935 and it is suggested that "some of them" (?) were made by E.E. Fairchild. I see that your set didn't come in the original doublebox, but in a sort of luxury set. Does it mention Fan-C-Pack on the box?

As far as I know there are two editions of the backs: the Old Curiosity Shop (same back design but with a red and a blue rim) and a Pan and Goat set (with a Pan back and a Goat back).
The idea was that using soft pastel colors would be easier on the eyes.

I  guess this explains"PAST~L~EZE" reference. Then Daniel Wilson added:

Daniel Wilson: “The Old Curiosity Shop”, by Fan-C-Pack out of NY. I have their “Pipes of Pan” set, a copy of which can be seen on the British World of Playing Card page on PAST~L~EZE.