Do I have these jokers? What do I know about them? Let's work our way through the Eight rows of this poster. I'll admit which ones I don't have - or brag about those that I do - and share what I know about the history of each joker and how many variations I have of them.

Click through to see the updated list of the 18 jokers that I’m still looking for.  If you have any of them, even as part of a whole deck, I'm highly motivated... 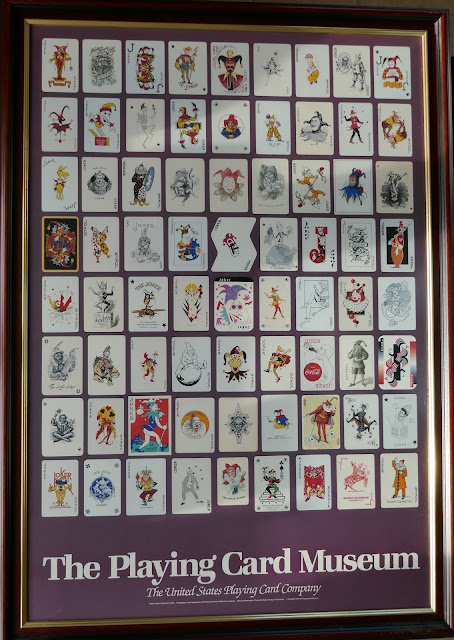 Background: This poster was published by the Playing Card Museum in 1991. The museum was run by the The United States Playing Card Company.  The fine print:  "Poster Design Margery B. Griffith Photograph, color separations and printing: Stevenson Photo Color Company. Paper and preparation: The United States Playing Card Company. Copyright 1991." I would love to hear how they picked these 72 jokers. I'm particularly intrigued by the choice of a joker published by Adobe Systems which was still a very young company back then.

If anyone has ones that I’m missing available for sale as singles or with a deck, I’m highly motivated. 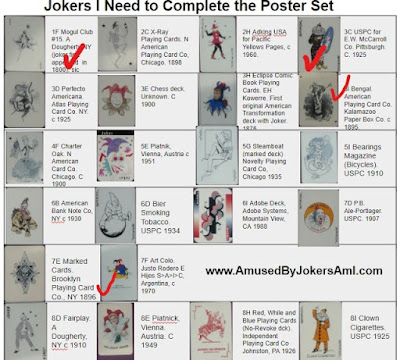 Here is the poster with the ones checked off but it hasn't been updated since April 2021. 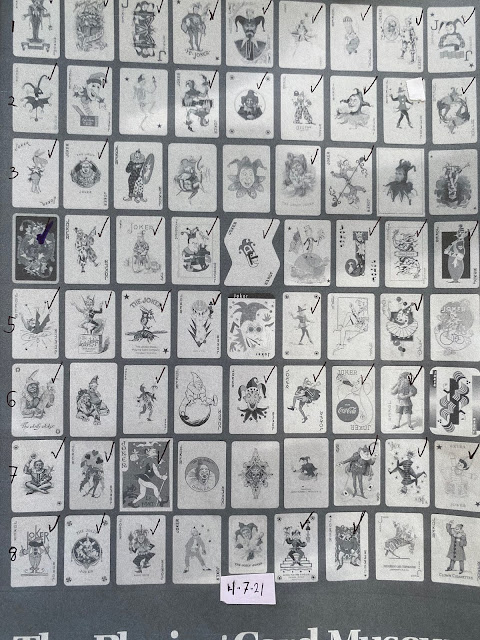 Row by row review.  Starting at the top row.
Row 1. 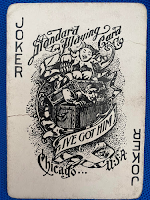 1B. He is in the American People section of my collection (which doesn't quite make sense) and  is the source of much interest by me to figure out what myth he might relate to.  I have maybe four variations of him. He was first published in 1895 by the Standard Playing Card Company based in St Louis and Chicago. He first appears as SU2 on P137 of Hochman. The key says FASTMAIL (sic), Standard Playing Card co, Chicago, c 1905.

1C. He is in the topsy jokers with  clowns or jesters section. Two variations. Northbrook Playing Card Co., 1965. 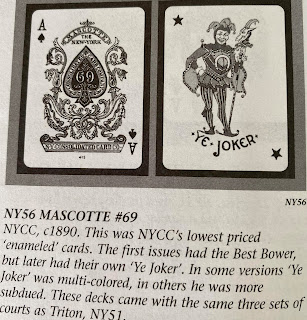 1E. Head no hands section. I have him in two colors and with duplicates available. Virginia Slims, USPC for Philip Morris, 1984.

1F - Picture provided by Matt Schacht who says that this is the Dougherty Indicator. MOGUL CLUBS 315. A. Dougherty, NY (Joker first appeared in 1890). I have him! 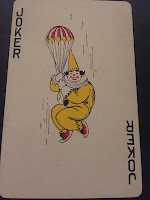 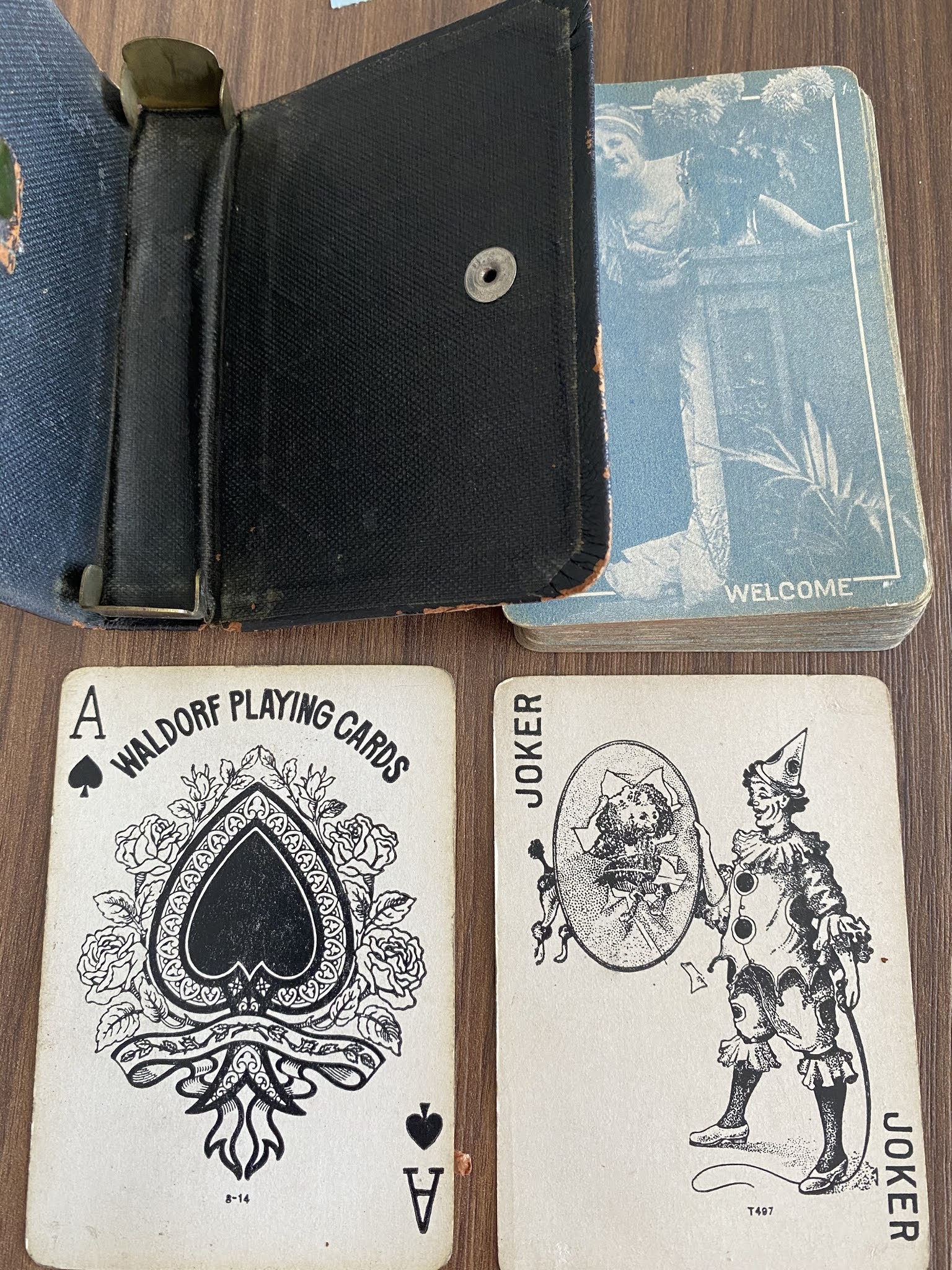 1I Waldorf #240. A Dougherty, NY c1909. I bought him with the deck. I keep the joker, as I do with my most precious decks, with the deck and only have a photocopy in the joker albums. (I have an article about my oldest decks). 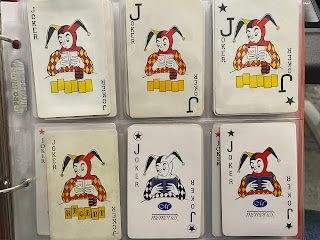 1G -  This card playing guy (what game could that be?)  is in the head and busts section, subsection with hands but NOT holding a wand. I have six variations. Special edition. USPC c 1950. 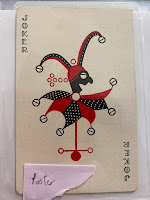 #2B. This jack in the box should in my opinion, be with the other jack in the boxes that are in with the jesters on a stick. I'll move him shortly. Currently, to be honest, he is in the clown section since he is clown-like and his pair, below him, is also a clown. USPC for Barton Playing Card Co. C 1960.
#2C. I do not have this dancing skeleton. At least not yet. Want it.  I also can't find it in Hochman so it might not have deep roots, it might just be a modern novelty joker.  X-Ray Playing Cards Co. NY c 1940 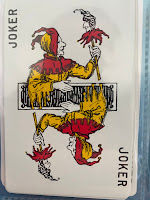 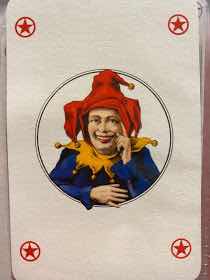 2E - Modiano. Have him with dupes and variations in the heads with hands section Modiana. Trieste, Italy. c 1950. 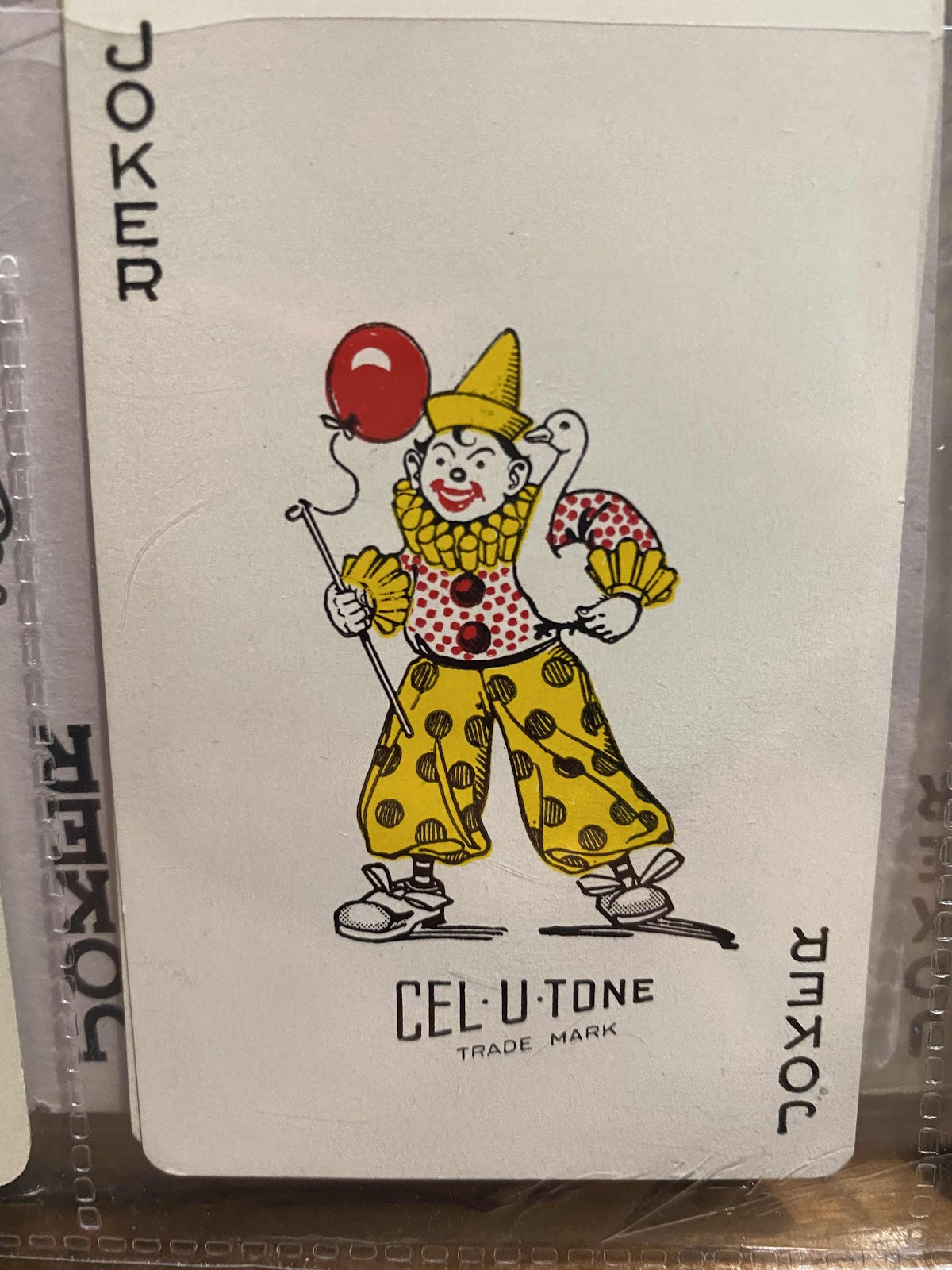 2F Clown with goose and balloon in the clown section.   Special edition. USPC. 1935. 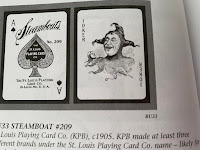 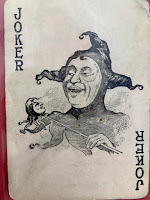 2H - Standing juggling joker that I don't have (but he might be in the mail if my memory is correct). Adking USA for Pacific Telephone Yellow Pages. c 1960. 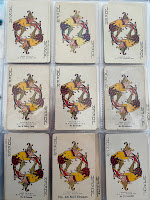 2-I - Topsy Jester or Clown Jokers - Have twenty or so variations of this Western Publishing Joker, if you count different numbers at bottom
Row 3 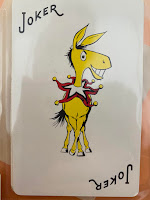 3A Donkey - He is my US Political Section.  Kennedy Kards, Humor House Inc. 1963

3B - Jester coming through the looking glass. I have him in color and black and white.  This Jolly Joker matches Ad12, Triplicate No. 18, c1876, Dougherty on P71 of Hochman and P54 of Paper Empires. She's in the hands but no wand of the Heads and Busts section. Interesting note: the first PM that I got about this post commented on my using she to refer to "the character peeking through a hoop".  Funny that I hadn't really though about the gender until Dan mentioned it. Since the character has make-up, I immediately thought it was feminine but really, as a circus clown, it's more likely a guy.Dupes. NAGPKA #708. A Dougherty, NY for export. c 1925 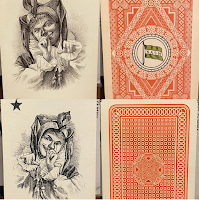 3F - Nose itch head. It's in  in the hands but no wand of the Heads and Busts section.  It's the top one of this set. The joker is by Bernard Dondorf from Frankfurt, Germany. They were used from ca.1895 until 1933. Here's Joops page about him and his kind.  I have two variations above. Joop explains: "NASM stands for Nederlandsch Amerikaansche Stoomvaart Maatschappij (Dutch American Steamship Company), which later became the Holland Amerika Lijn, better known now as HAL." Poster: B Dondorf, Frankfurt, Germany c 1895. 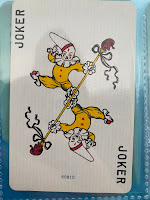 3G -  Topsy Jester or Clown Jokers - Historical clown.  Goose stepping clown. Originally published by A Dougherty, c1905. AD37. Hochman P77.  Climax #14.
3H - Don't have it. Eclipse Comic Playing Cards. EH Lowerre. First Original American Transformation deck with Joker. 1876. I’m told that this a collectors dream and probably unfindable and unaffordable.
3I - I now have the Bengal. American Playing Card Co. Kalamazoo Paper Box Co, c. 1895. I bought it with the entire deck. Most expensive purchase yet. I'll keep the deck intact and together, I have a quality copy that I'll put in my album. I've done that with a few on this list where I had to buy an entire deck. It'll go in the seating section, facing forward.
Row 4. 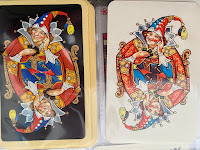 4A. -  Topsy Jester or Clown Jokers - Russian. Have dupes and pair. I remember when I first bought him when I was in Russia in 1979! 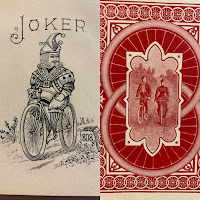 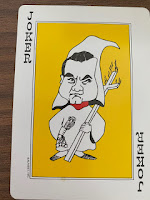 4D - Hubert Humphrey on a Hobby Horse. Humphrey was known for his progressive views, persistence,  and his good nature: he was nicknamed the Happy Warrior. I have this one but right now (but i thought I didn't). He is categorized (currently) in the horse section but now that I understand more about him, I think he should be reunited with this matching joker who is in the politicians jokers section of the collection.  This joker is one of two from “The President’s Deck” published by Alfabet, Inc. manufactured by USPC.  United States Playing Card Co. c.1972.  Richard Nixon (US President) was on the Kings, Pat Nixon (first lady) was on the Queens, Spiro Agnew (Nixon's first vice president who was indicted, convicted, and incarcerated for corruption) on the Jacks. The jokers featured the two candidates who has run against Richard Nixon in the election: Hubert Humphrey (Democrat) and George Wallace (who ran as an independent and was a racist populist who is best known for his statement: "segregation now, segregation tomorrow, segregation forever").  Hochman p.229, P13; Fournier, Playing Cards, North America 232.USPC Presidents Deck. Smith Western Publishing. Oregon. 1971.

4F - I do not have Uncle Sam on the globe. I hear from Glenn that this is the Democracy deck, very rare. 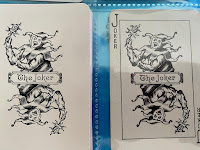 4H -  Topsy Jester or Clown Jokers - Got them. In the topsy section, jesters and clowns.
Row 5

I need D, E, & F.
7A - Got it. Sitting Cross Legged Joker section. You can see him pretty clearly in the row above

7B - This jokers is from as of yet, unknown American publisher (per the poster key) c 1935. It's in the joker about cards section.
7C - Just got "Fact & Fancy" 3/6/21 from Matt (thanks!). He will go in the Jester Jokers with No Wand (standing or walking) section. He's circa 1961 designed by Dick Martin for the Chicago Playing Card Collectors, Inc.

7D - need him
7E - Need him
7F - need him. He's a Justin Rodero joker (thanks to Steve Bacon of Two For His Heels for this info).
7G - He is the jokers with weapons section
7H - He's in the Topsy joker section, clowns and jesters subsection
7I - He's in the Heads and Busts section, subsection Jesters on a stick, page of Jack in the box Jokers.
7G Image below

Would it be too much if I lined up my  jokers like the row above leaving blanks for the ones that I don't have?
Here's the published key (anybody have a higher resolution scan for me?). 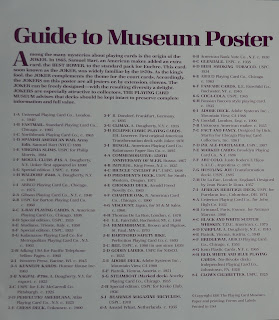 updated list of the 18 jokers that I’m still looking for.