As my readers know, I focus on the jokers and rarely involve myself in the deck of cards. But for these jokers, I'm making an exception. 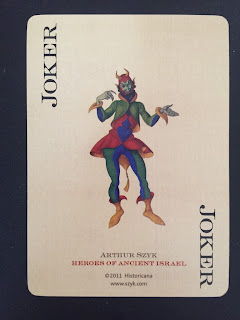 Arthur Szyk was an artist who fled to the US from Poland just before the Holocaust and was a significant contributor to American propaganda art during the war. He is perhaps most famous for his 1950 portrayal of the Declaration of Independence.  He was a book illustrator and his art for Hagaddahs was very popular.

He also illustrated two gorgeous decks of cards. "In the 1930s, Arthur Szyk joined a storied artistic tradition by illustrating an exquisite set of playing cards. Painted in his highest style in watercolor and gouache on paper, the twelve court cards - four Kings, four Queens, and four Jacks - each feature a different Jewish hero from the Bible or ancient history. Every idealized portrait includes the hero's name in Hebrew calligraphy and a symbolic element alluding o his or her story". 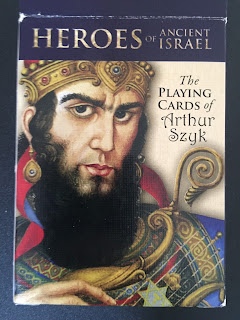 The jokers - not mentioned in the formal description of the deck that I quoted above - are of a dybbuk, a mystical Jewish figure.   Or so I am told by Pam Stein, the contributor of this deck and joker.

A dybbuk, per Wikipedia is: "a malicious possessing spirit believed to be the dislocated soul of a dead person." I will continue to research this. As part of this, I've been reading the Wikipedia article on the 21 Jewish mystical characters, there are a lot more birds that I would have imagined.


The deck of cards by Arthur Szyk features the 12 royal cards who in the card tradition, connected them with characters from the old testament.

Focusing on the women,  the Queen of Diamonds portrays Ruth. Notice the wheat in her hands which echoes the story of her going to the fields to harvest excess wheat and barley where she caught Boaz's eye.

The Queen of Clubs by Arthur Szyk is Judith. 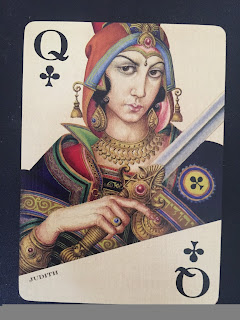 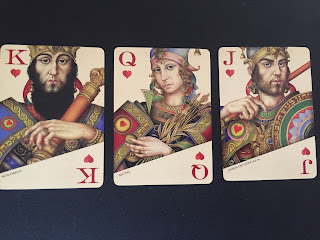 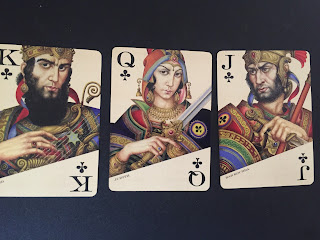 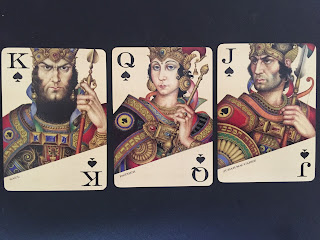 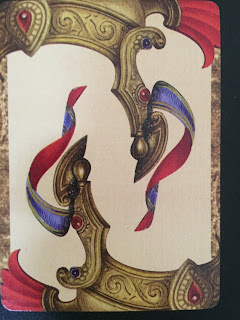 I put him in with the mystical, devil, and other death-like jokers.

Here's a few close-up of the devil or death cards. 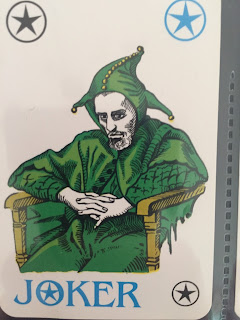 This one interesting, is also involved with Jewish mysticism. I'll need to research it too. 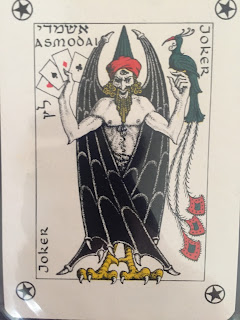 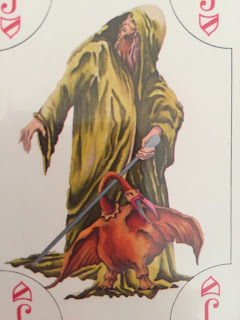 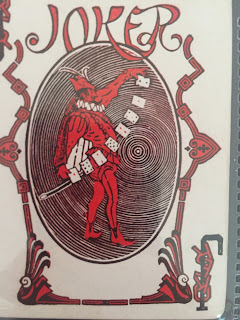 I think the only precedent on this site for discussing the full decks of cards was when I discussed the transformational decks of cards.  More info on the devil and mystical jokers...