This category of jokers are those that are armed, usually with a sword, rapier, or spear.  Most are dressed from the 17th & 18th Centuries.  I haven't included modern military here so no guns. And I exclude wrestlers although there's one fighter with armor but no weapon.

NOTE - I've started to update this section with a new Jokers with Swords section. It starts with a video of the 85 jokers now in this section

I have about 61 in this category (updated number in July 2018) of jesters with weapons.   But there are a good numbers that could be in this section: I raise some interesting and tricky questions about categories in this article! Don't be scared, read on!

I'm not sure what you call the long weapon in this jolly joker's hand. Could it be a medieval pole axe, some sort of spear, or a quarterstaff? (I'm lost looking around websites with medieval weaponry. I'm a lover not a fighter.) His sword is his sheath.

Update: a Ronald Kruijmel just told me on Facebook that this is probably a "halbard" (he used the Dutch word so there's room for confusion). 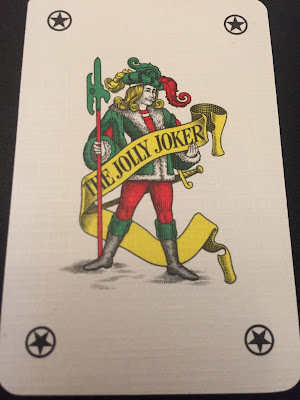 Here's another jolly. No long weapon and his sword is also still sheathed. His clothes are red and his banner proclaims him as a world joker! 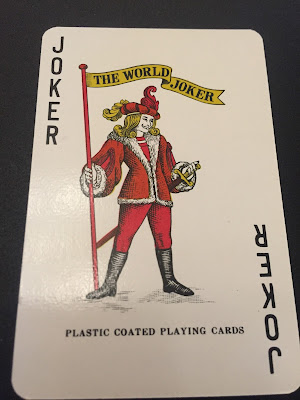 The shield of this ferocious green fighter shows that he fights for rights of hearts, spades, clubs, and diamonds, regardless of their color. 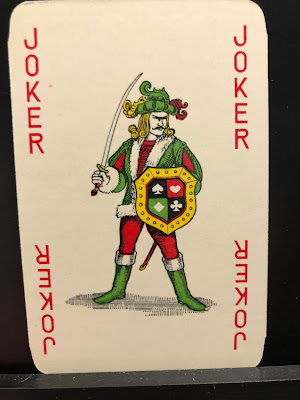 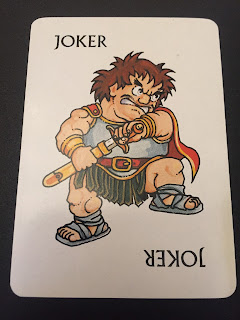 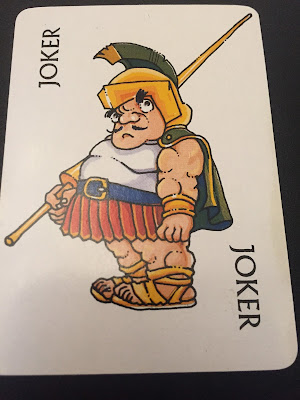 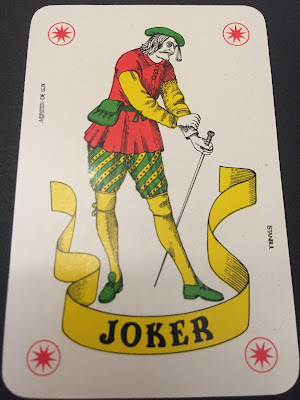 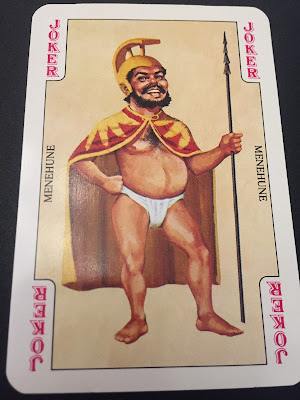 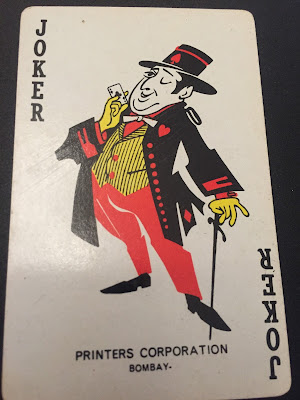 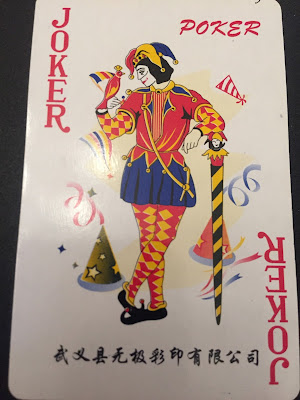 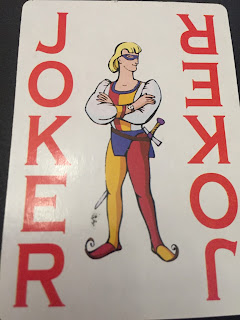 This next joker is one of a group that I call the Money Bag Jokers.  Most of them are from the jokers with swords section, but some are in the dancing. 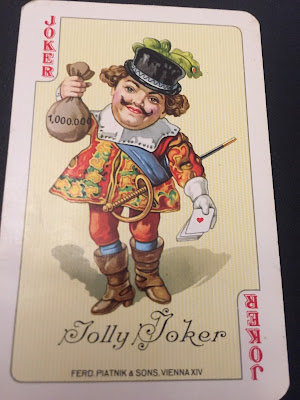 This next joker has a sort of bat, not a sword or spear. It looks like a weapon to me! 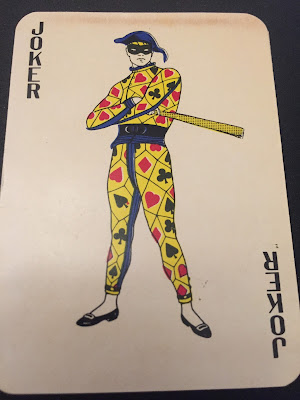 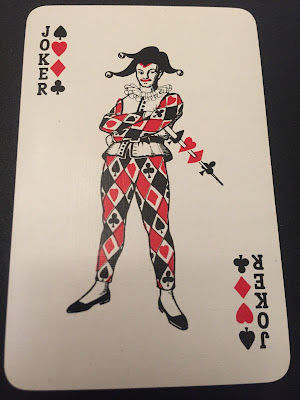 Categories. Has anyone else wrestled with questions of joker categories?  I'm going to take a few minutes to review a number of issues in my current taxonomy of jokers (ie organizing system).

Look at this next joker, he is not in the sword and fighter section, he is in a section that is more of stylized designs.  What do you think?  More of a fighter or a stylized dandy? 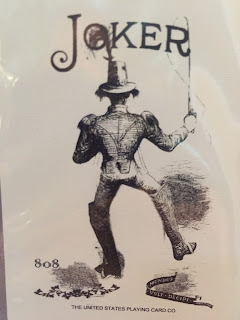 I put that guy (above) on this page (below) of Edwardian era black and and white retro designs. My thinking is that while he does have a sword, in fact is using the sword, I have him in the old black and white turn-of-the-century section and NOT in the sword section because it feels more stylistically coherent to me. 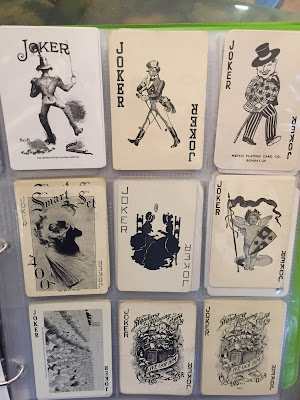 Here's a guy with an old musket. He is in the US & UK historical section, not the swords and fighters. 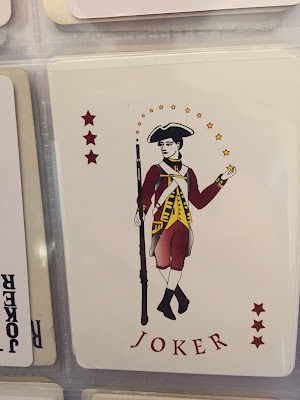 Musket man (above) is on this page (below): Would he fit better there or on the fighters page? 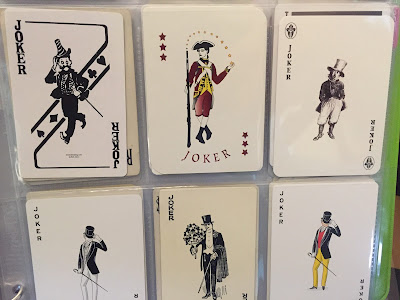 Another question about categories. This statue of an ancient wrestler is in the history section but should he be in with the fighters? 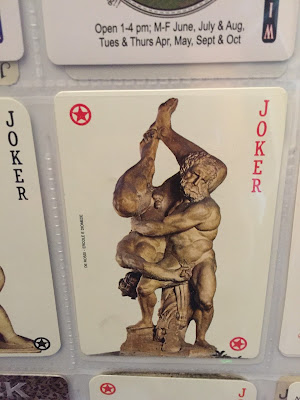 The wrestler shot is in a history section that contains statues and some architecture.   What do other joker collectors do about categories? 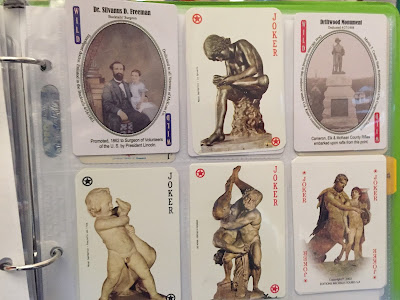 The six jokers below are from part of the history section.  The top middle one is clearly sworded and I think the outside two on the bottom row are too. But they are in history section despite the swords. I think sometimes about a cross listing system. It could work like this. Each joker goes into his primary area and then, either a duplicate or photocopy of him goes into the other places that he should be. If it's a duplicate, I'd need to have a little marker (sticky?) which marks him as a duplicate and lists the canonical category that he is in. The original one would also need to marked somehow that a duplicated exists in the collection.  Is this a logical and reasonable next step or totally nuts?  I wills say I find it a more interesting question than when I start starting at 10 nearly identical jokers looking for tiny nuances that distinguish one from the next. 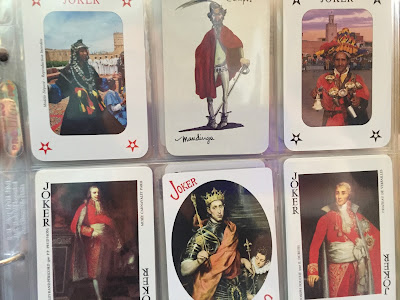 More sworded jokers from the history section.  This is driving me crazy!!!  I might need to rethink my categories! 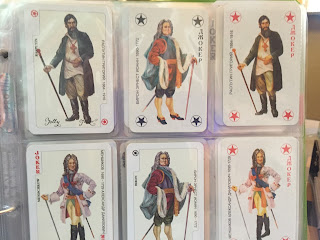 And another historical joker with a sword who is in the history section, not the sword section.  I think the answer has to be that the sword section is made up of simple design jokers (of vector art for people who think that way), not paintings or statues or photographs. No modern fighters.  Wheh! Figured it out. 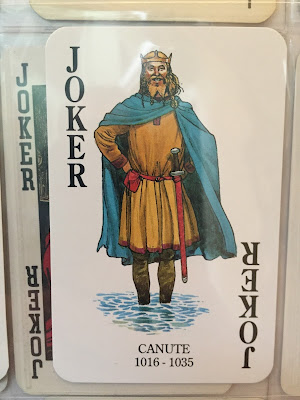 Jokers: Swords and Fighter Summary.  Below are the 48 jokers currently in the jokers - swords and fighting section. 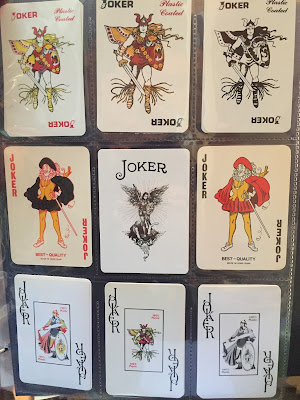 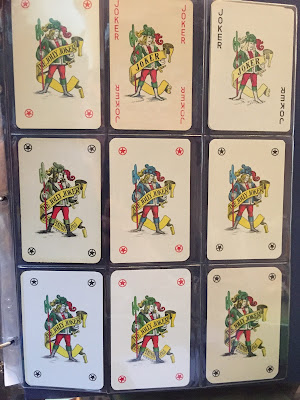 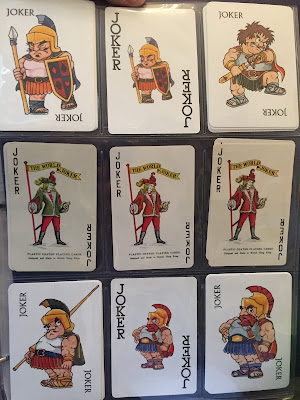 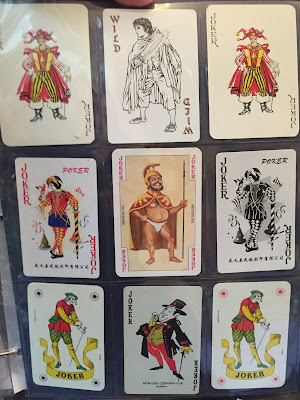 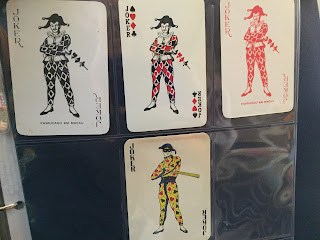 The top middle guy on the page below is the only one in the section with no weapon. I don't recognize the character so I have him here. The back of the deck is Teenage Ninja Mutant Turtles so he could credibly go into the cartoon section. 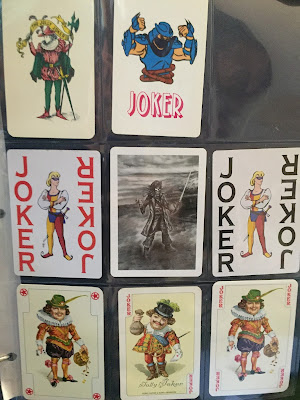 Also, on the page above is the question of the middle joker, the skeleton pirate with the raised sword.

While I had him for while with fighters, he is now with the mystical and death jokers pictured  here: Jewish Demon (dybbuk) jokers.  Read this far? Then join the fun and leave a comment.

As I mentioned, there's now  a new Jokers with Swords section. It starts with a video of the 85 jokers now in this section.

Maybe jokers with swords is a type of sports joker?
Or related to standing jokers?
Or jokers of history? (OOPS, just realized that I'm years later posting about how I've split the Real People jokers inter entertainment, statues, history, and others. Stay tuned!!!)