Mostly birds, some insects, a butterfly or two, and some dinosaurs.  Yes, some of the birds, such as the penguins, are flightless. I don't have a swimming or sliding section for the penguins so they go with the flyers.

One of my long time favorites is the Bee Joker which I think was initially produced by Lewis Cohen and the New York Consolidated Card Company as part of the Bee 92 deck. The brand was maintained by the US Card Playing Company.   You can read the US Playing Card History of the NY Consolidated Card Company  The Bee Joker has a large bumble bee being ridden by a standing baby, dressed as a jester and holding a jester's wand or bauble. Let’s call him Bee Boy!

The Bee deck with the diagonal lines on the back (pictured below) was a favorite of many magicians and gamblers because the back enabled dealing seconds or from the bottom of the deck.


This peacock joker was one my early finds.  I remember buying it in the mid 1970s during a summer road trip up through New England. I bought it from an old barn in I think Vermont or New Hampshire.  Gorgeous, isn't it? I don't know if I've ever seen a second one like it.

This rooster joker is another of my old favorites. I'm not sure of its origins, I suspect it is French since they have a thing for roosters.

The next two jokers are from the Fable III deck. These cards were created as part of the launch of the Fable III video game on the Microsoft Xbox in October 2010. The game was developed by Lionheads Studio led by Peter Molyneux. (This is long past my own involvement in creating video games which was in the 1990s but I did meet Peter way back when in his Magic Carpet and themed god-games phase).


This joker was the featured Joker of the Month in November 2010 on the  DXPO Playing Card website. This card and joker collection was started in 1996 and has been online since 2004. It's run by Miriam van Houten (more oriented towards jokers)  and Joop Muller (more oriented towards decks of cards) from  Zaandijk, a small town in the western part of the Netherlands.  I find their website remarkable in the depth of research and insight associated with each joker.  And I quote:

This almost surreal joker comes from the Fable III deck, which was included in the "Limited Edition" of the Fable III game for the Xbox 360. 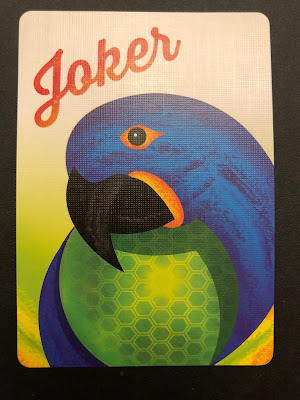 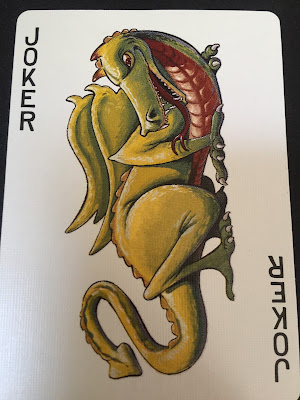 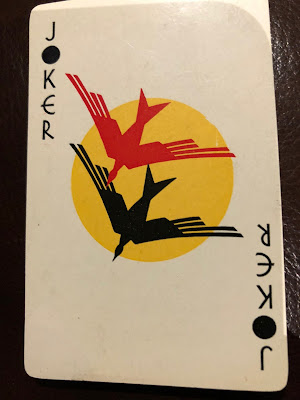 Here's a summary of the flying jokers in their  pages of nine jokers.

BTW, I count the jokers as different when there are distinct differences in design such as the name or corner elements or size of the design elements. If the only difference between cards is that one is bridge size and one is poker, I don’t count them as different.
Update Aug 24. 2020 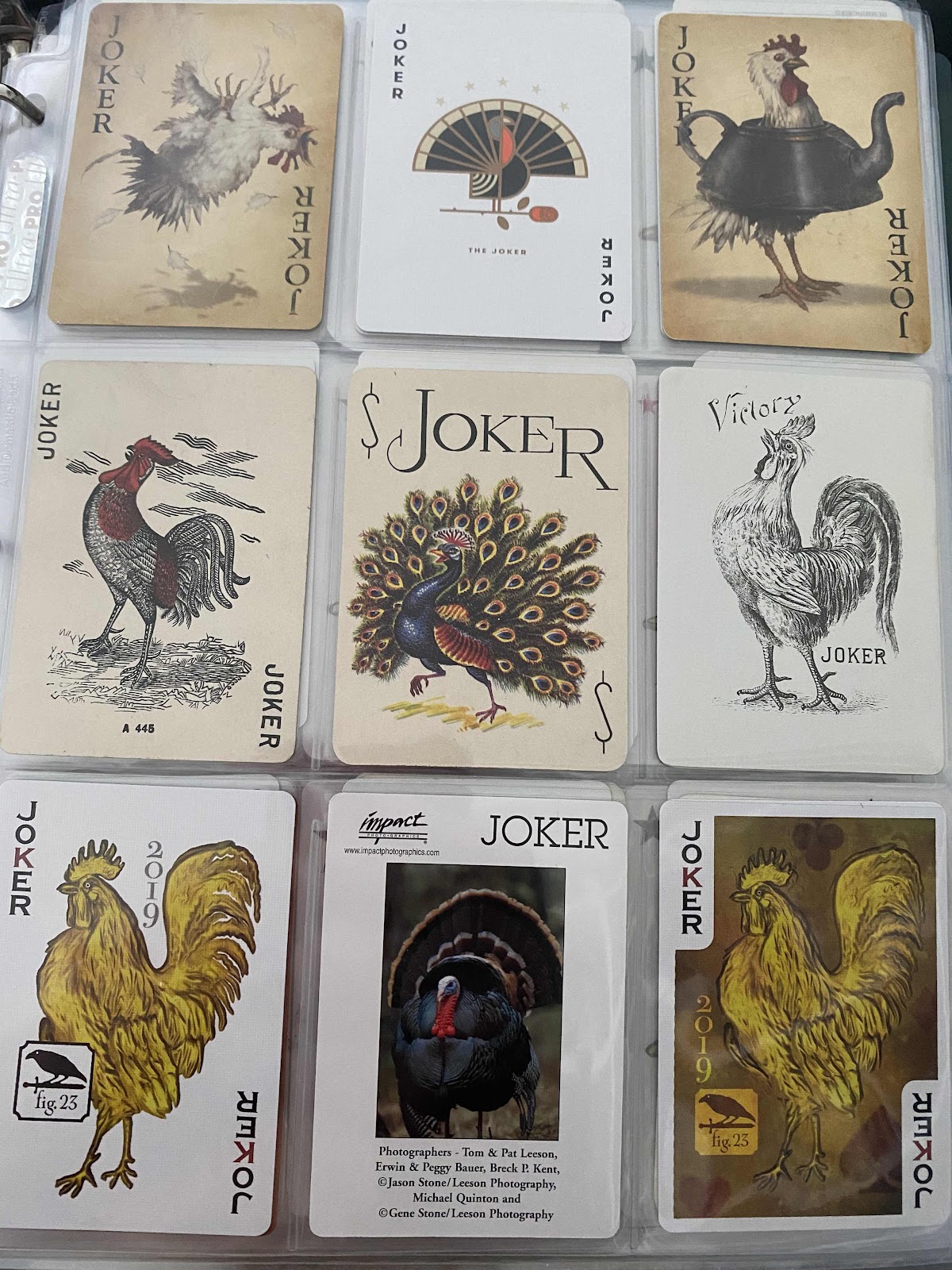 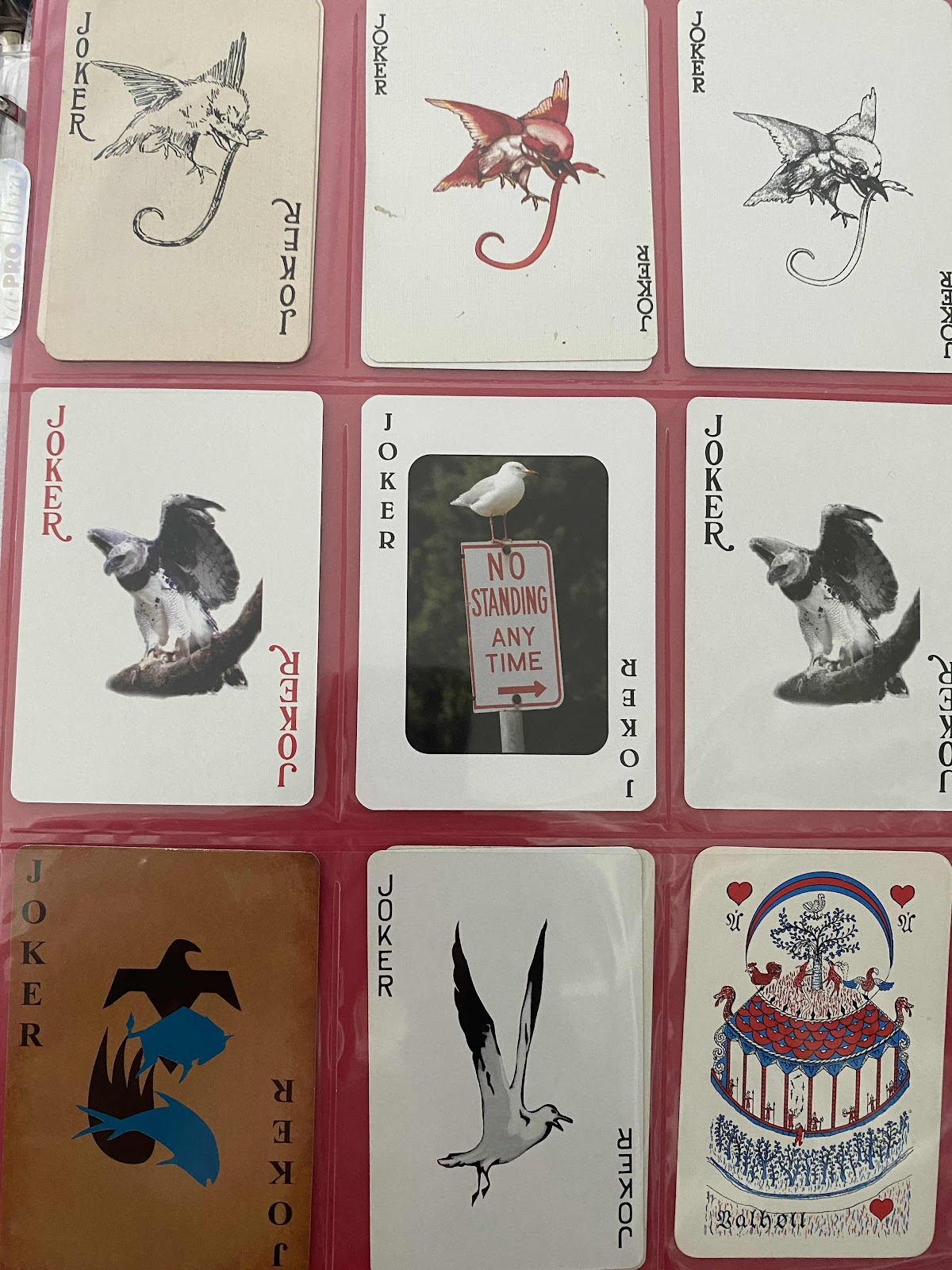 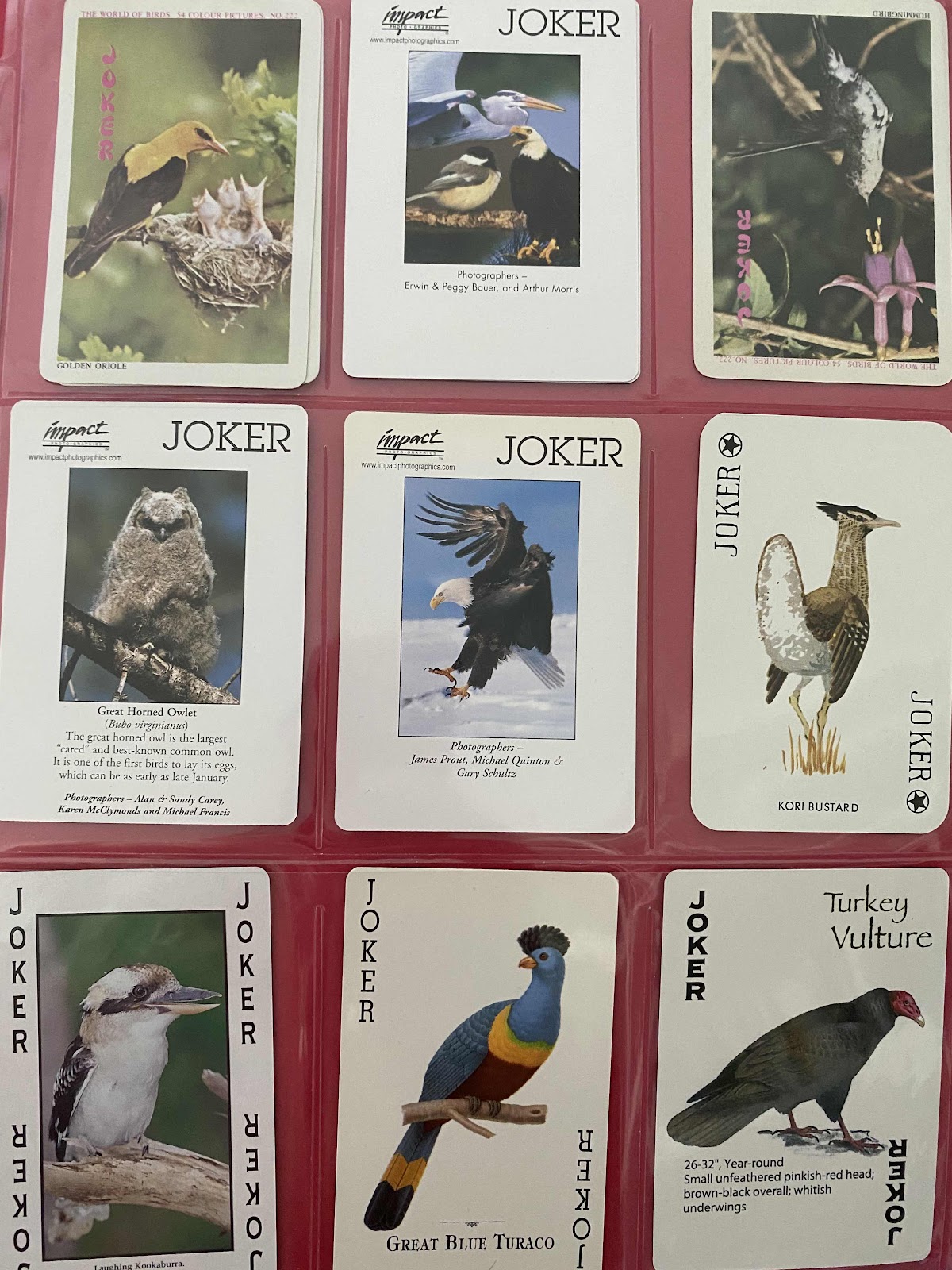 You can follow part of the history of the card industry through the different company names on the Bee joker.
Note the variations of the Bee Joker going back more than a century. They all have the diagonal back.  The oldest ones are from the New York Consolidated Card Company.  Then  Consolidated-Dougherty, Division of The United States Playing Card Company,  Finally, there are three from the United States Playing Card Company, Cincinnati, Ohio, 45212. BTW, as far as I know, this design was not licensed: this is just the sequence of ownership with one company buying the other sort of pacman-style. 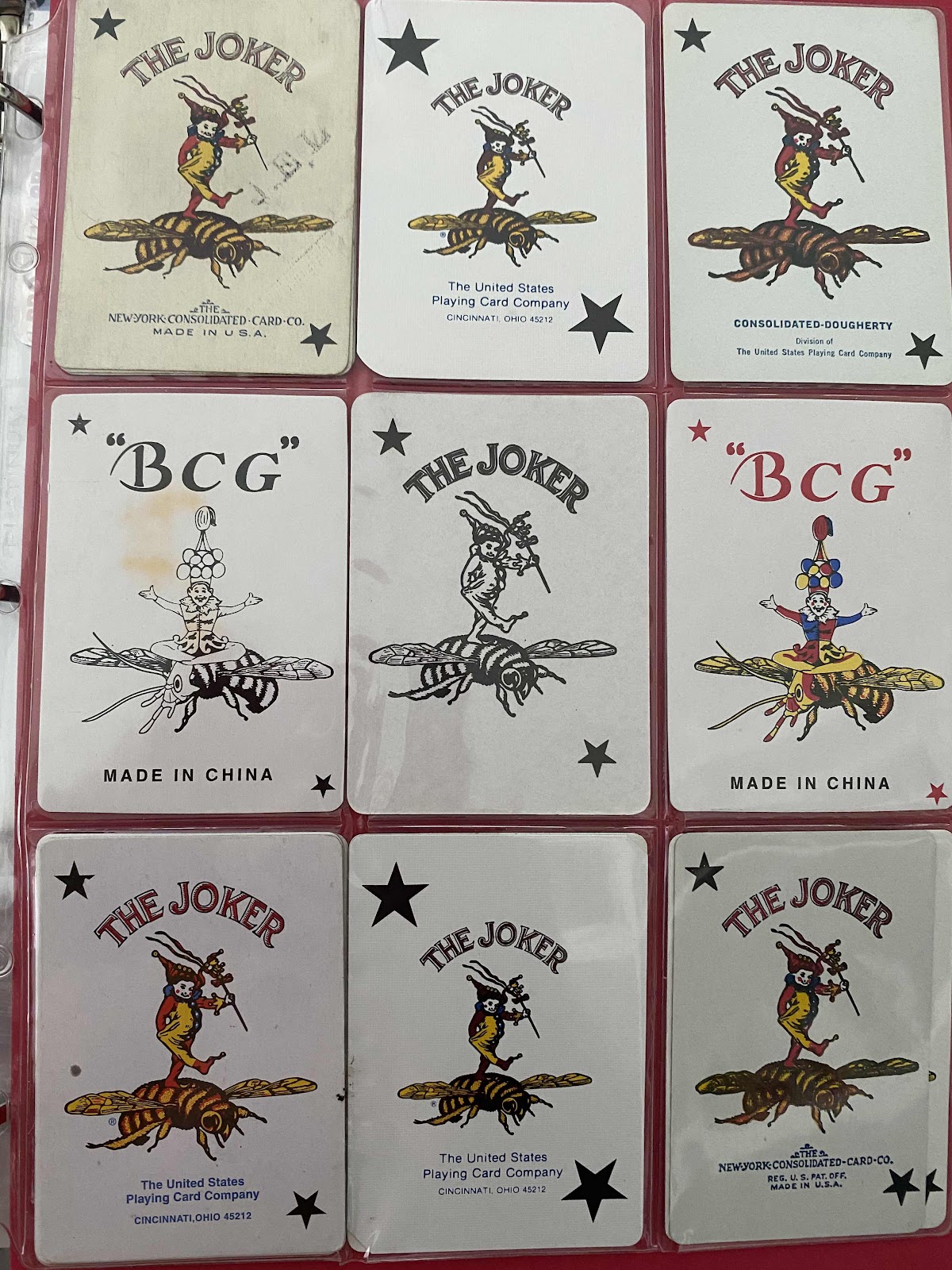 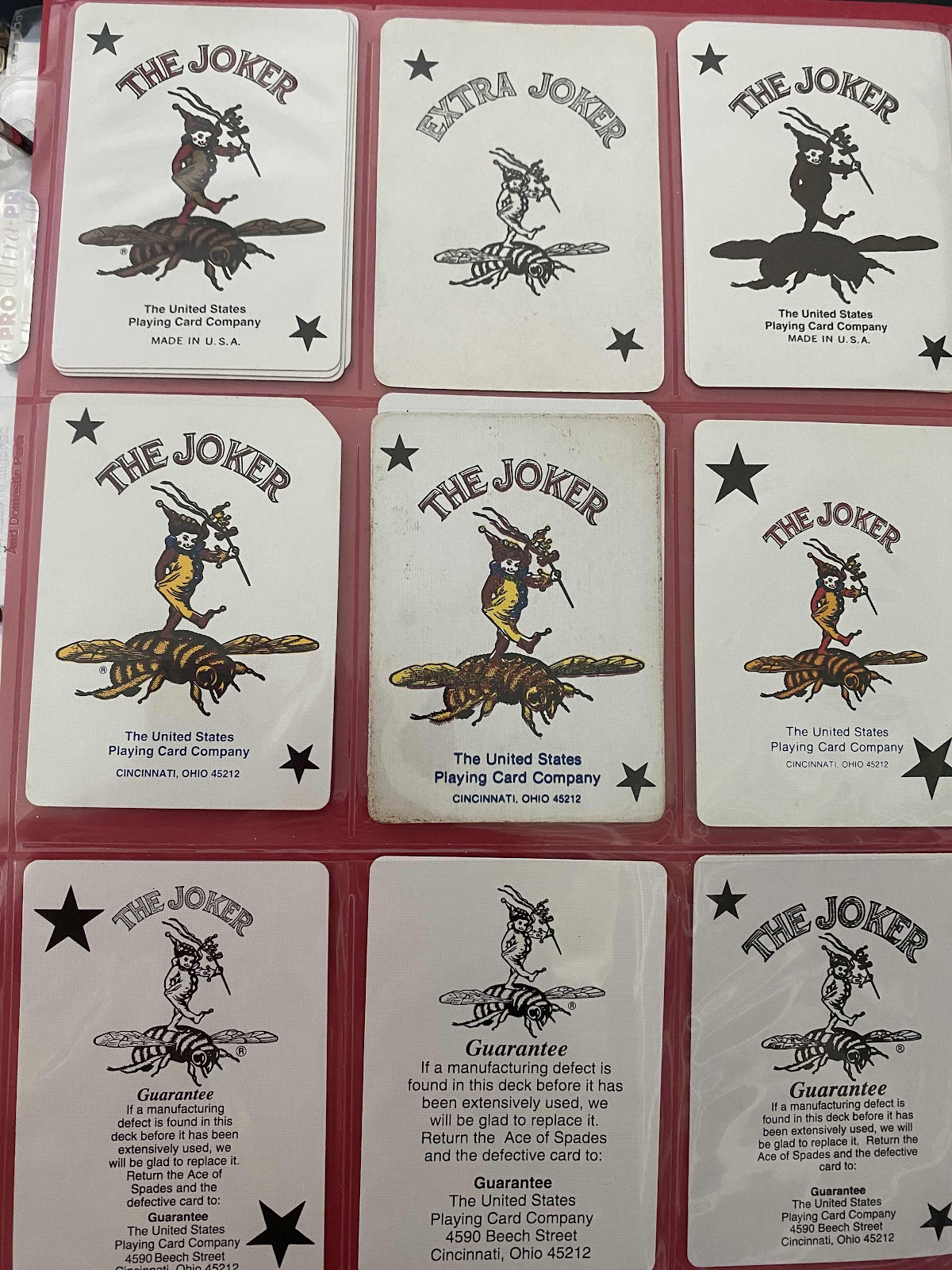 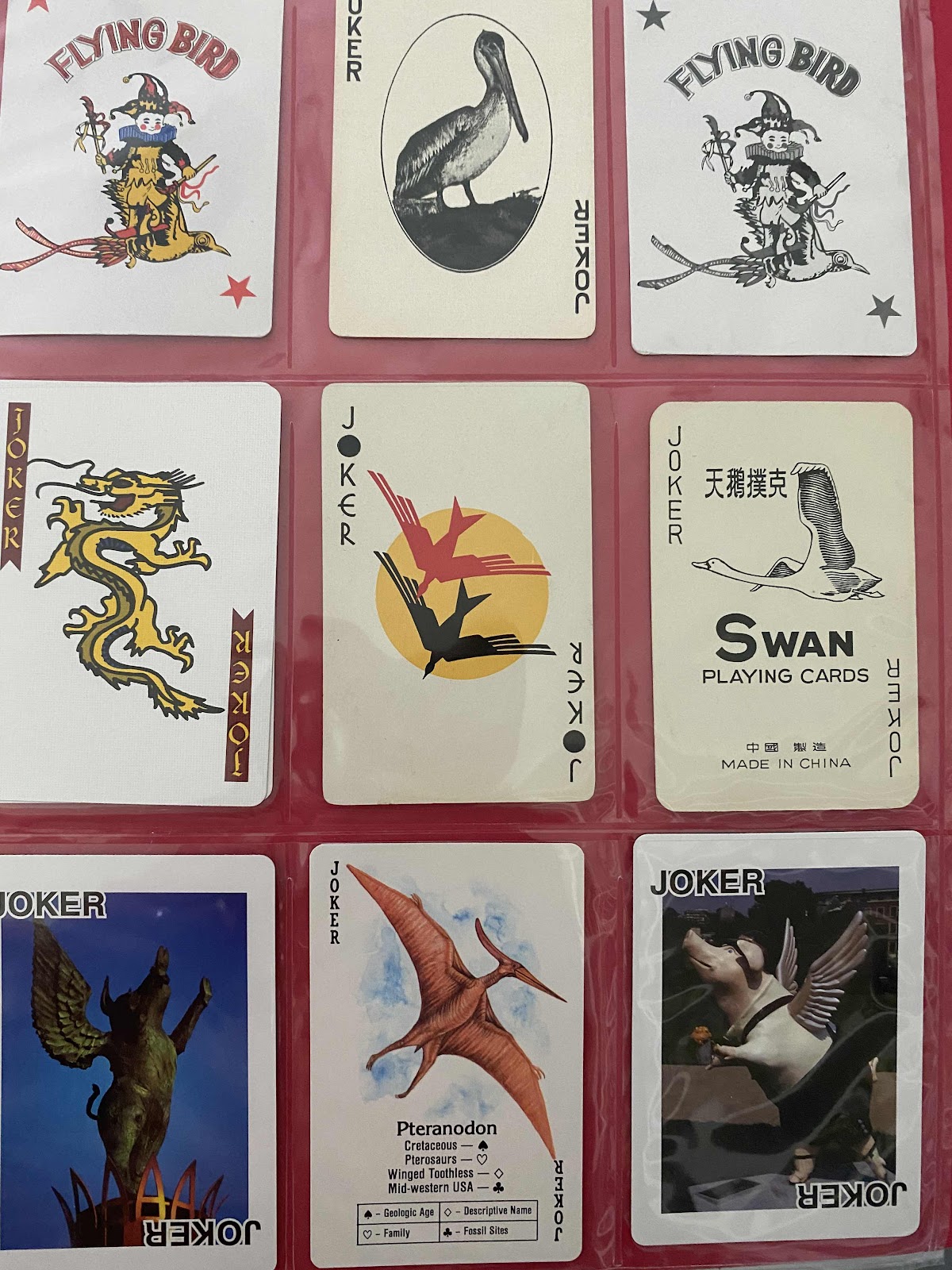 Birds are directly descended from dinosaurs: the link to dragons and the Phoenix are less clear but are being explored in these jokers. 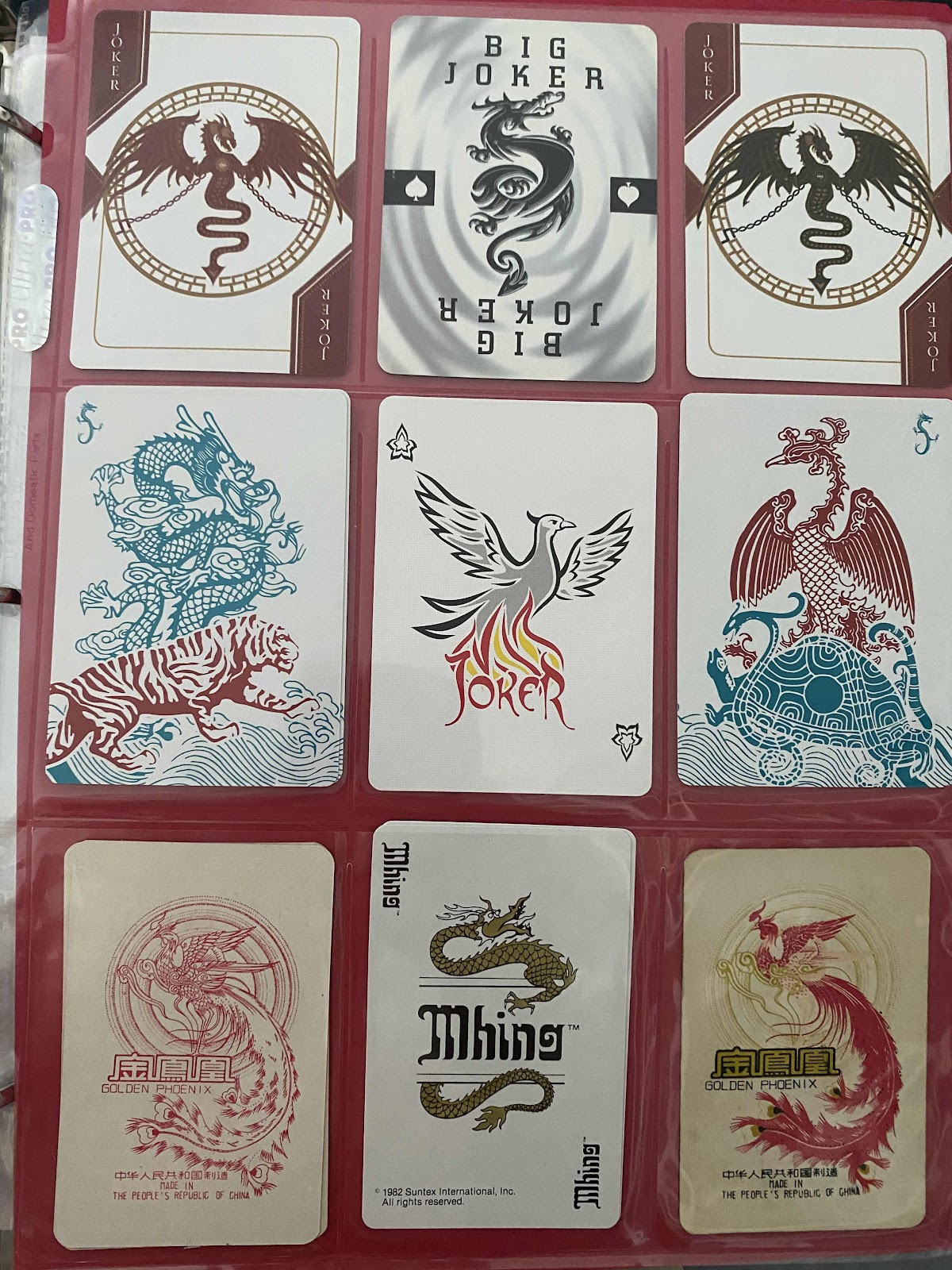 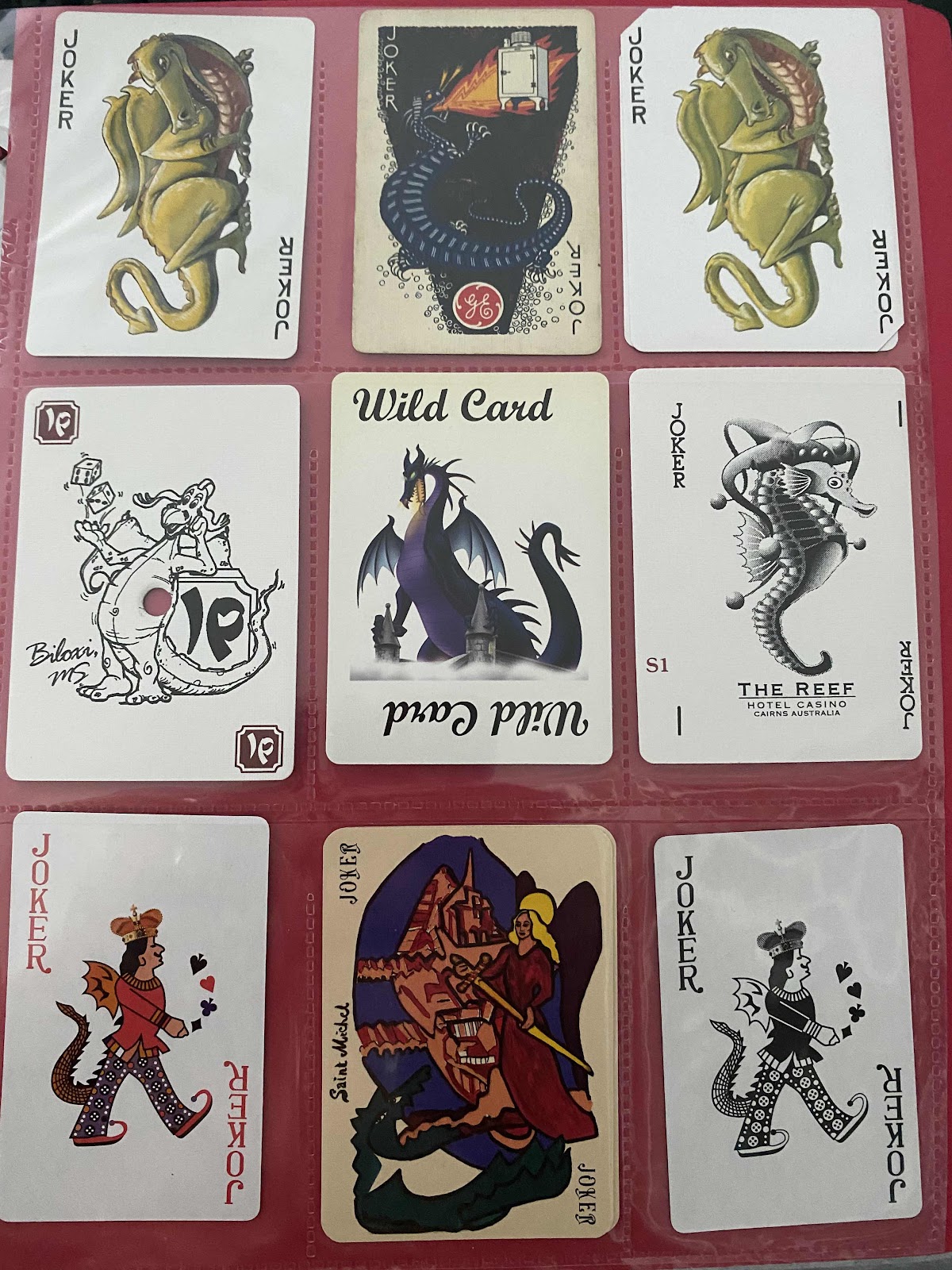 Enough with the mystical flying folks and dragons, back to birds and cartoons of birds. 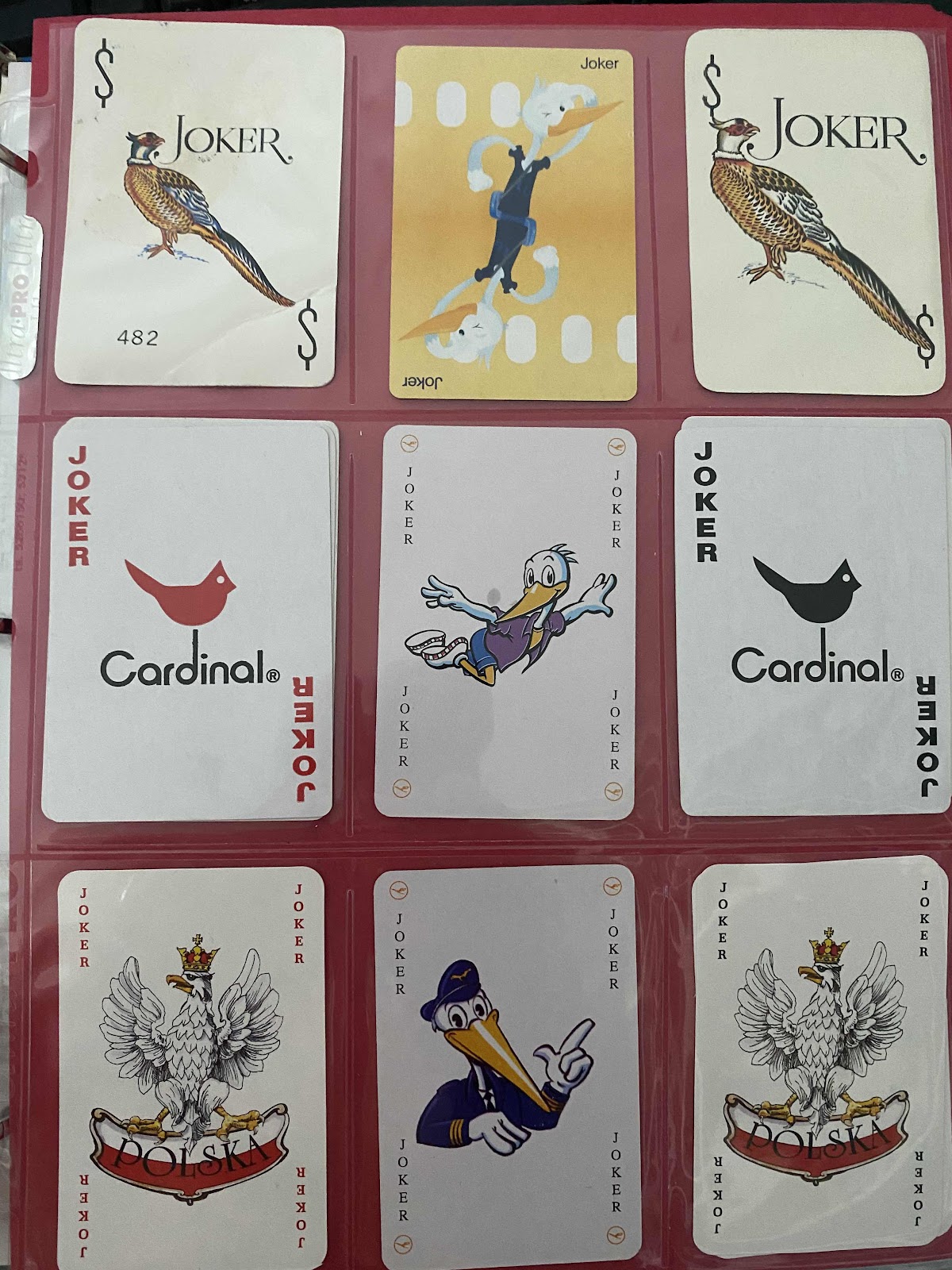 The joker below on the top left might rank as a historical US joker. I’m researching it. 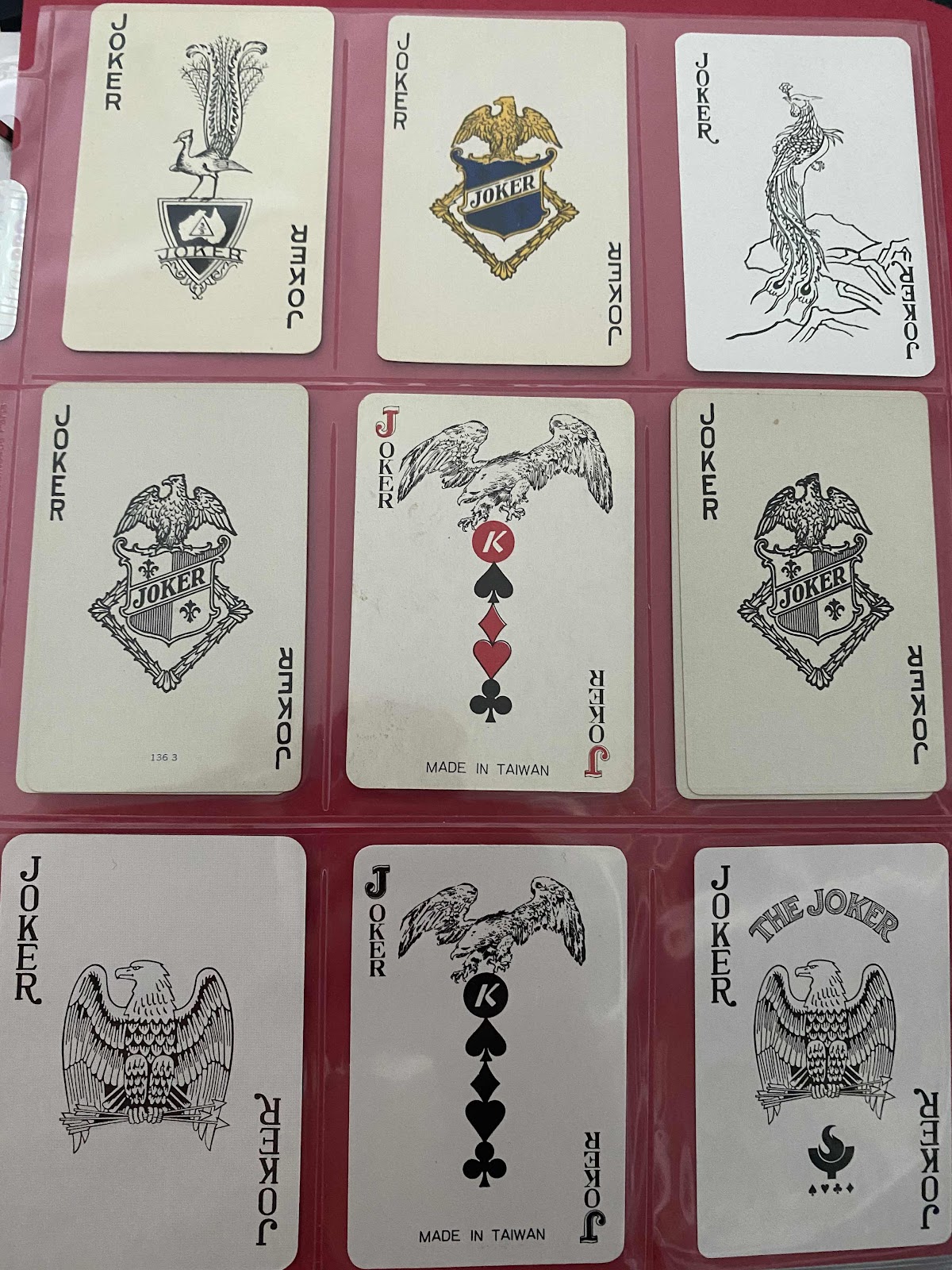 Why is this parrot page inverted? Have I been hacked? Sabotaged? Is it the aliens? 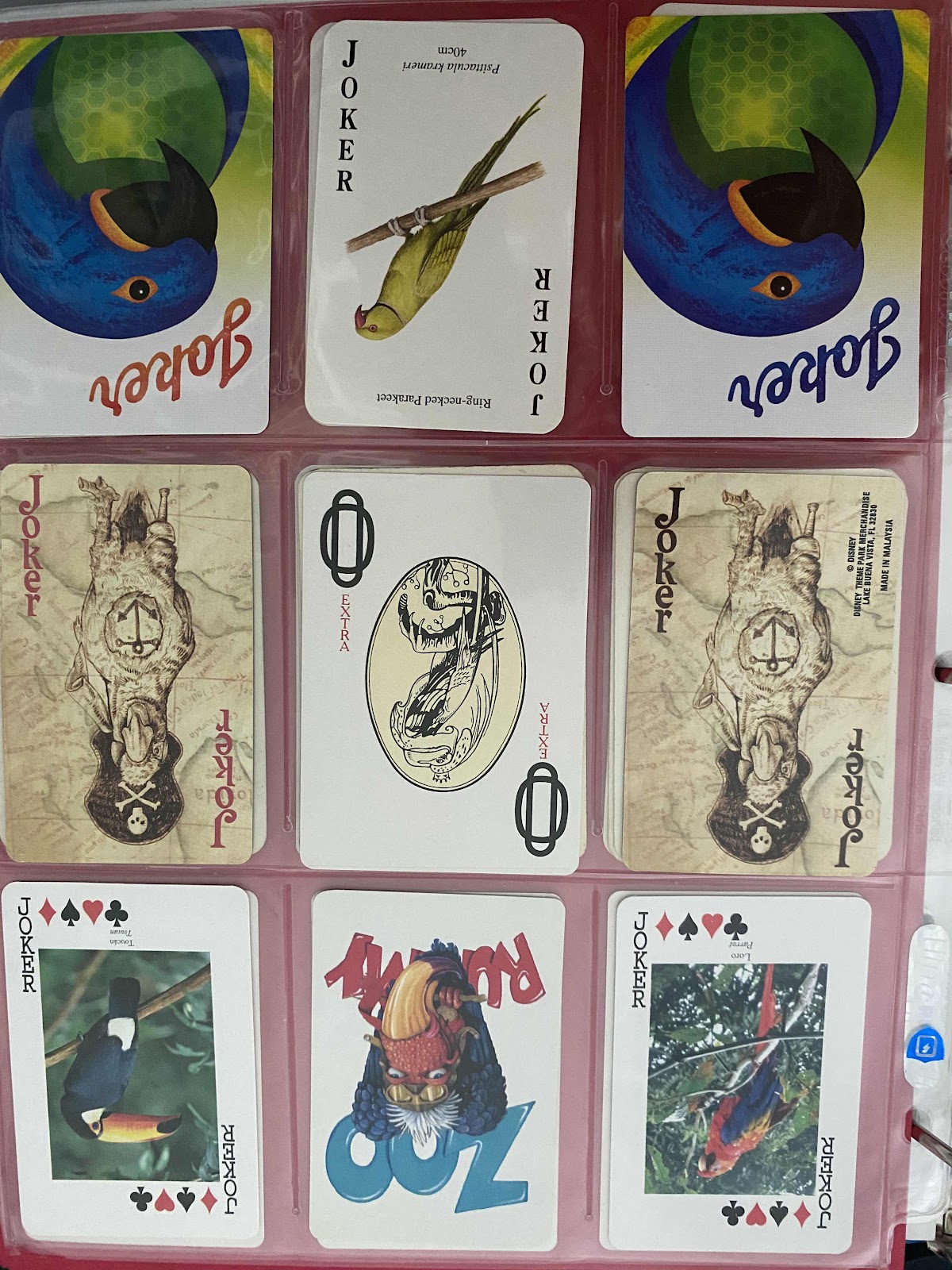 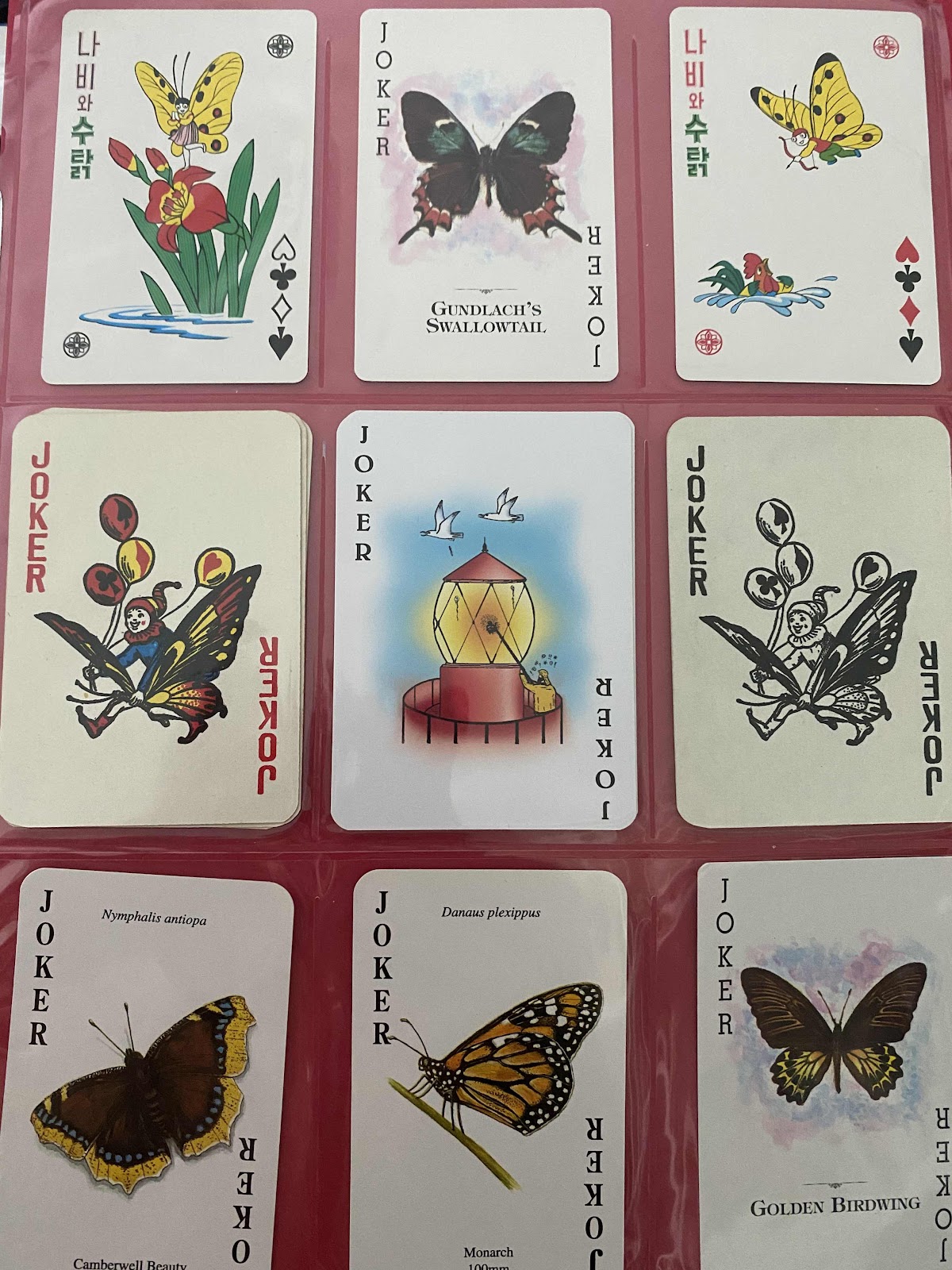 Heh, didn’t I see this cardinal jokers a few pages up? Fraud! Cheater! Where’s the quality control? I want my money back. 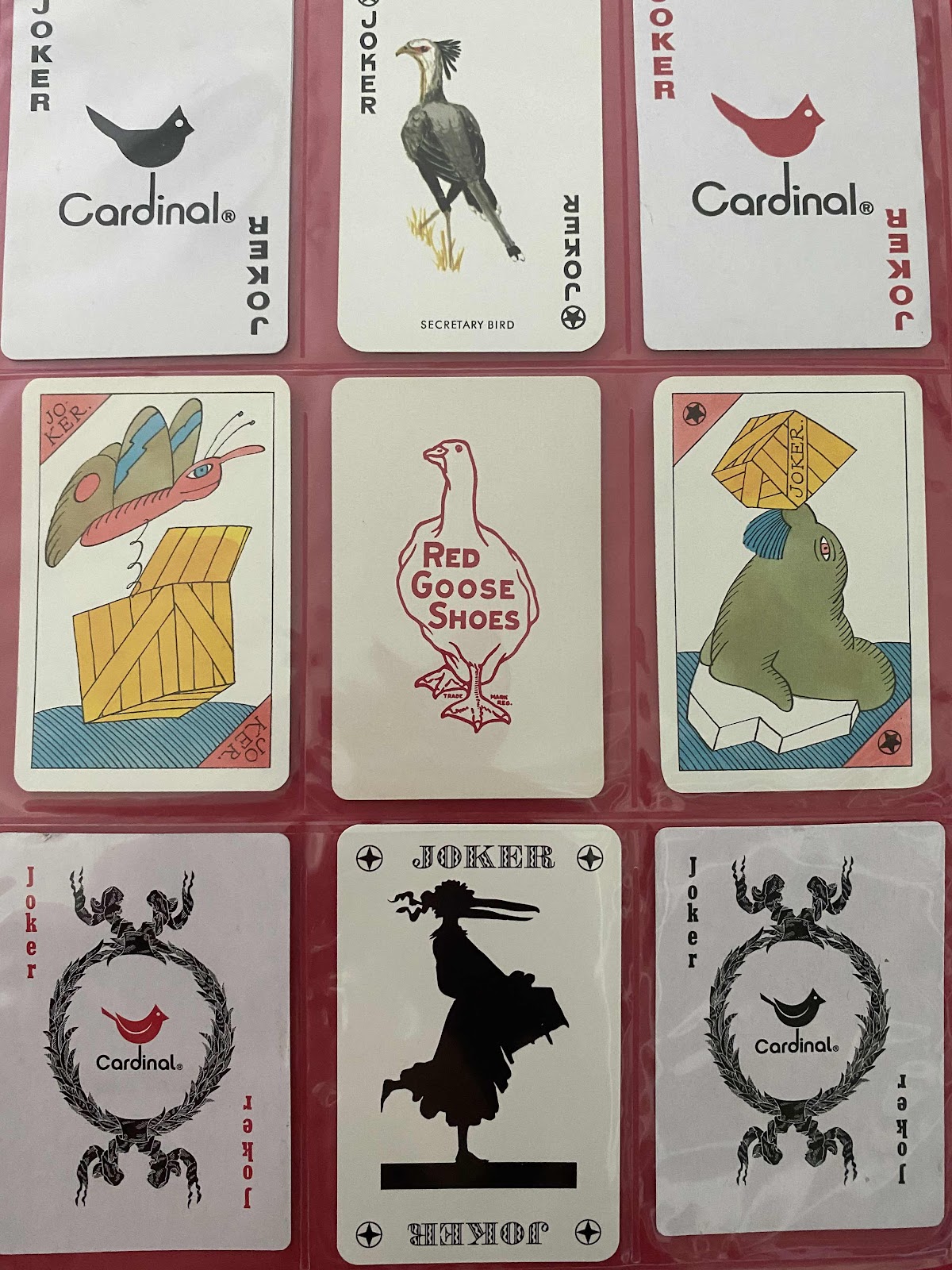 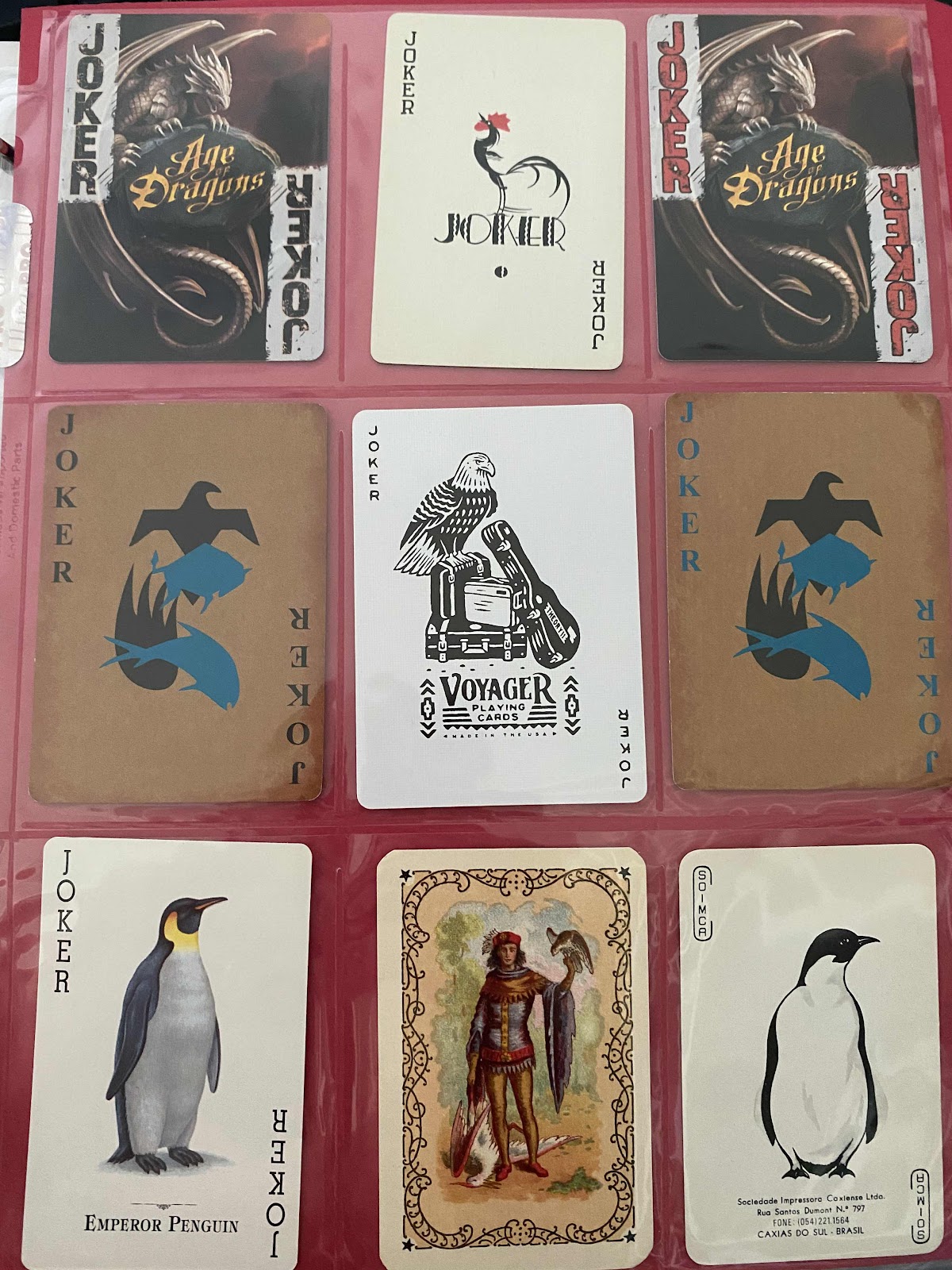 Shouldn’t the two beekeeper jokers below (by the highly esteemed card designer Randy Butterfield), be with bees, not the birds? 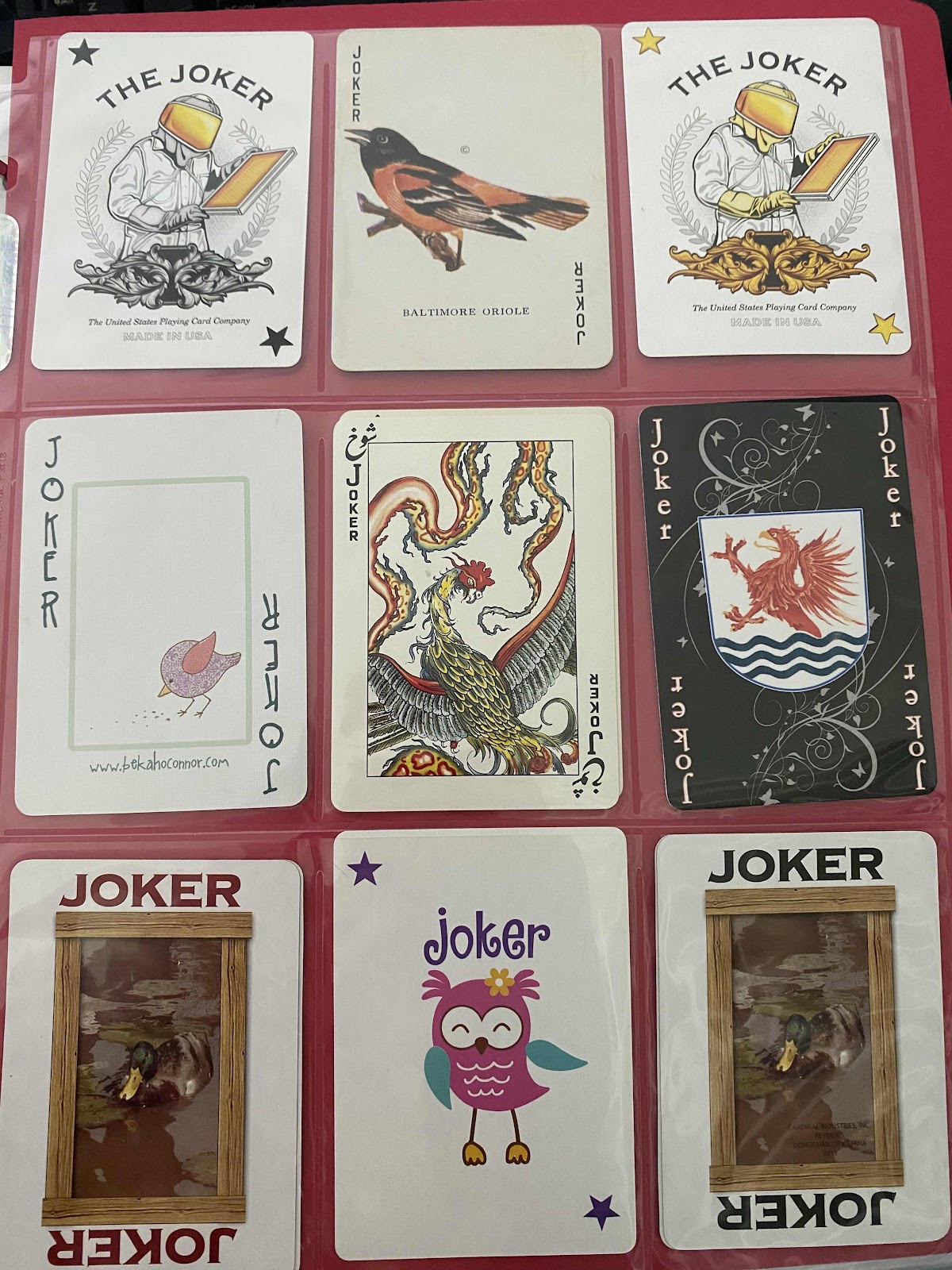 Wow, that’s a lot of flying jokers. Is it a fraction of the flyer jokers ever published? Yes, by definition it is. But what fraction? 10%? 30%? 50%? 70%? It’s an impossible question but I would estimate that it’s about ~20% of the flying jokers ever published? My reason? This collection is about 7k: the largest seem to be 21K and they might have only half of the jokers.

Next, for a total change of pace, check out the Americana jokers or the Performing Jesters (with cards).