When is a Hobby Out of Control?

Over the last decade and increasingly over the last few years, my collecting hobby has consumed more and more and more time and attention from me.
I’m really enjoying it and there seems to have been enough cognitive, temporal, and financial surplus in my life that I can commit to it without yet falling, or failing, in my other endeavors.
I will be self-monitoring this trend since internal alarm bells are ringing.
But back to my hobby and how it has evolved, morphed, or changed (I use to have a hobby of thinking about words and how to study them which converged with my business life which resulted in the website and app: VocabularySpellingCity. But I sold that business and now, when I start thinking about word study and how I might write, blog, Tweet, or develop around it, I need to remind myself that word study is no longer my business and I should focus on something that is. Like collecting joker cards).
Right, back to the latest era in my joker and now card collecting. For starters, speaking of hobbies, when I look up from my monitor, this is what I see. Yes, that's the Hochman Encyclopedia. (Anyone notice the Triumph Vitesse next to Hochmans? Yes, speaking of hobbies, I own one. 1963).
I use to just keep dejokered decks in boxes in a back room but recently I’ve been buying some significant historical American decks and I’m now collecting and displaying them. 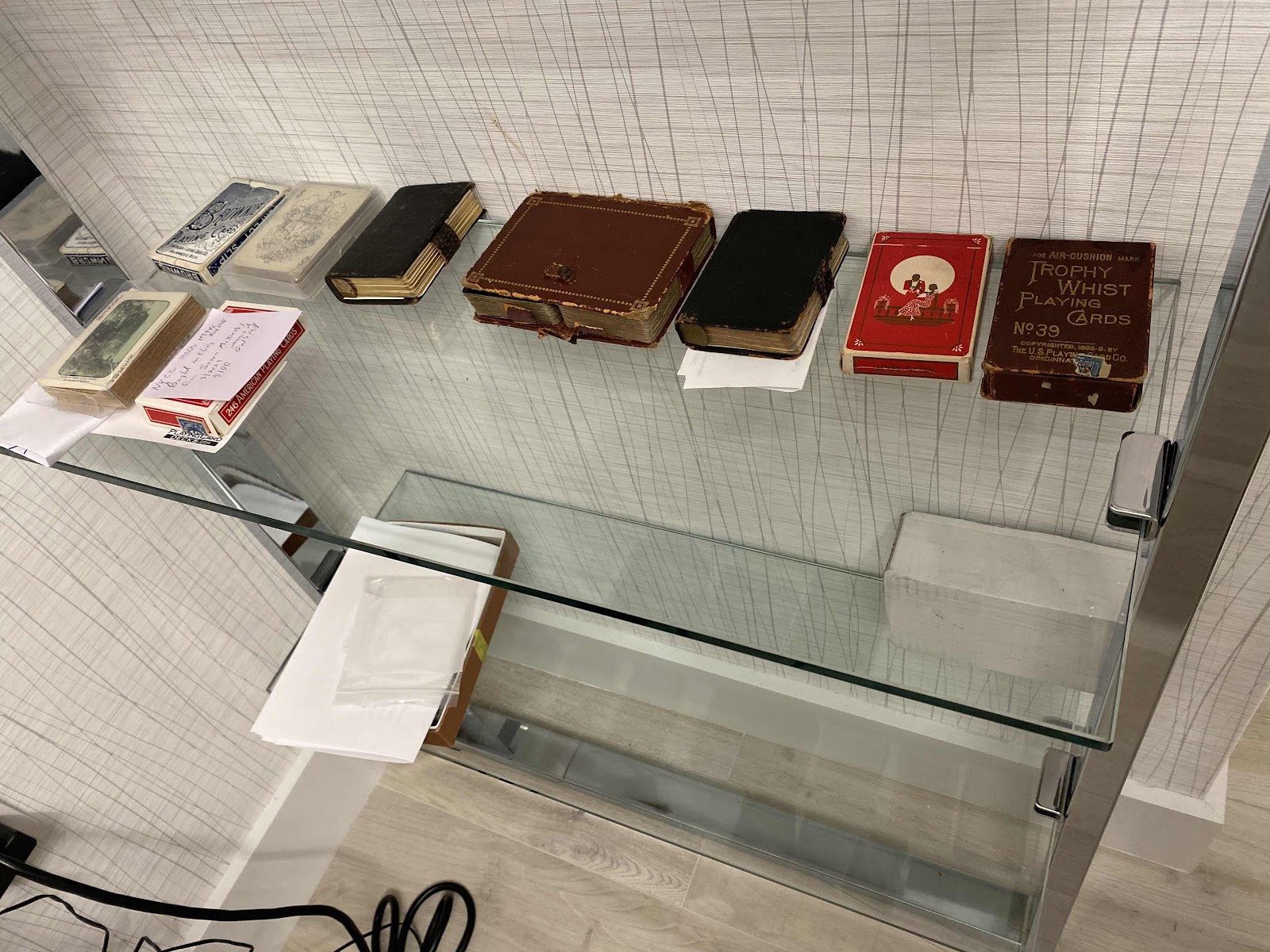 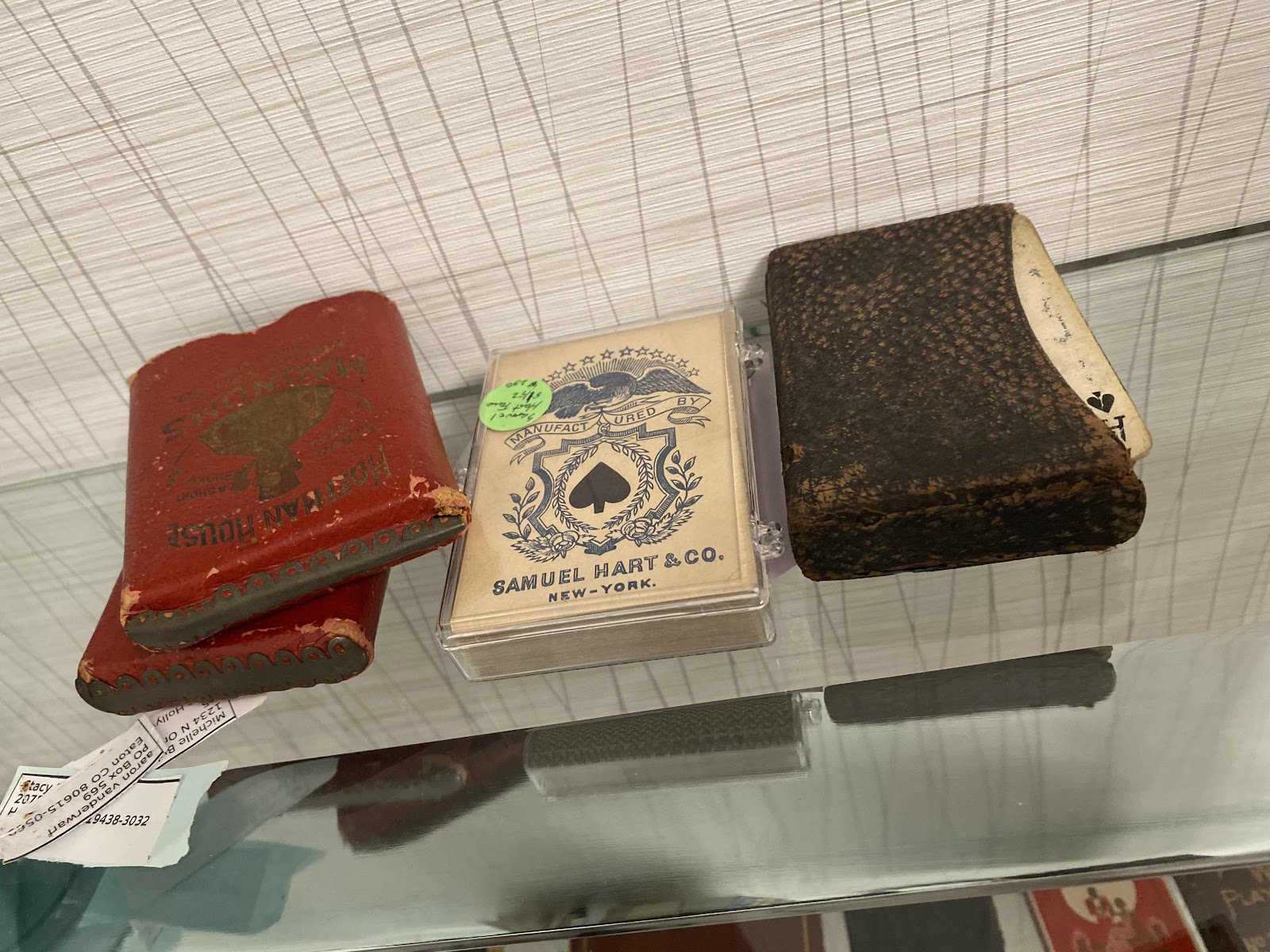 And to get some key jokers (are you aware of my Joker Poster joker pursuit ), I’m now buying historical decks which are broadly valued collectors item which gives me a heavy sense of responsibility to properly curate and maintain. So I’m wrestling with how to keep the deck and joker together and to put the joker where it belongs in the albums. So I’m creating a “placeholder copy” and I’m looking for a better term for it. 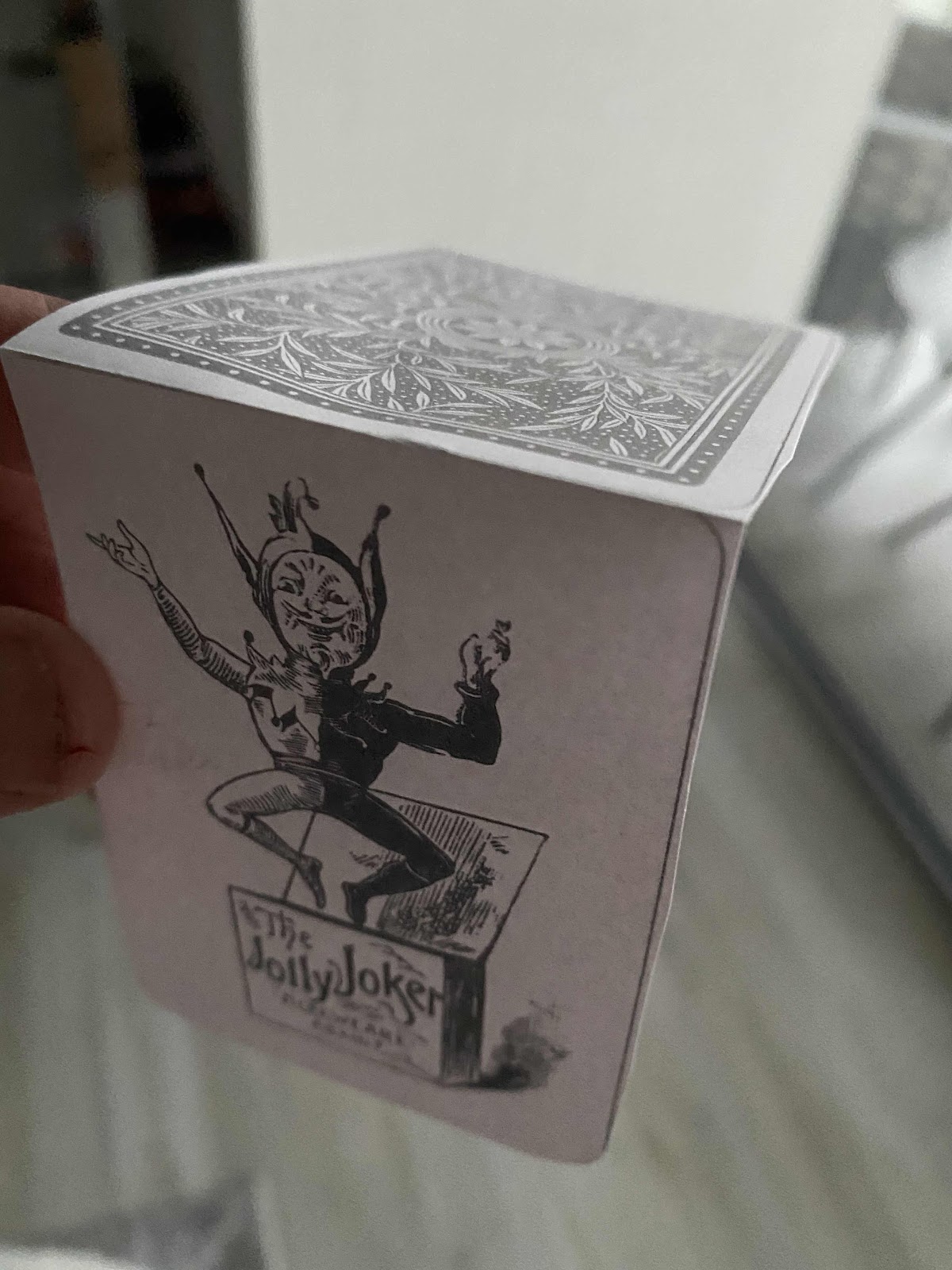 I also have some less significant still interesting vintage decks that I’m considering how to display. This set of four is just a small sample of this category. 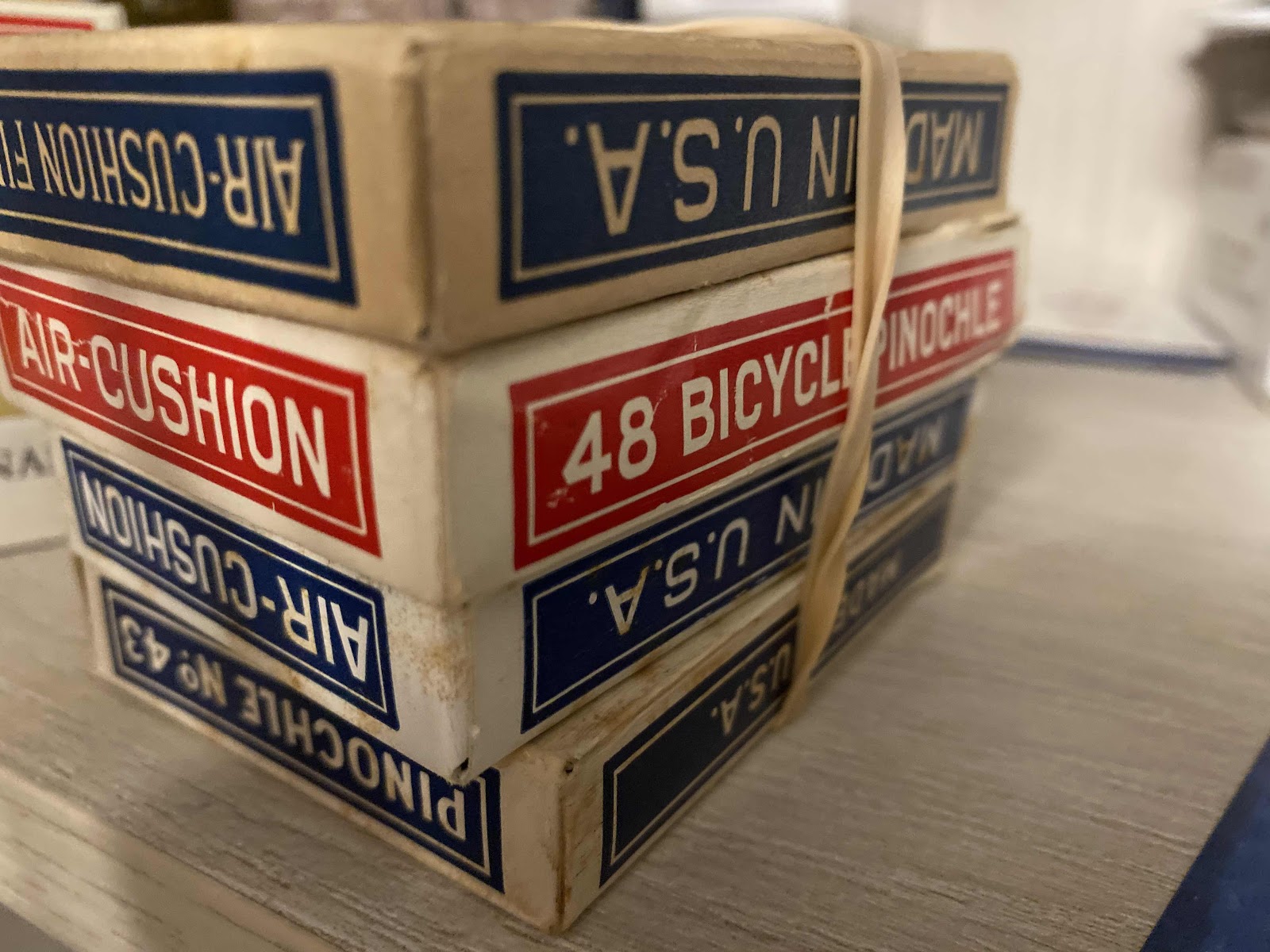 This is not to be confused with my modern reproductions of early American decks. 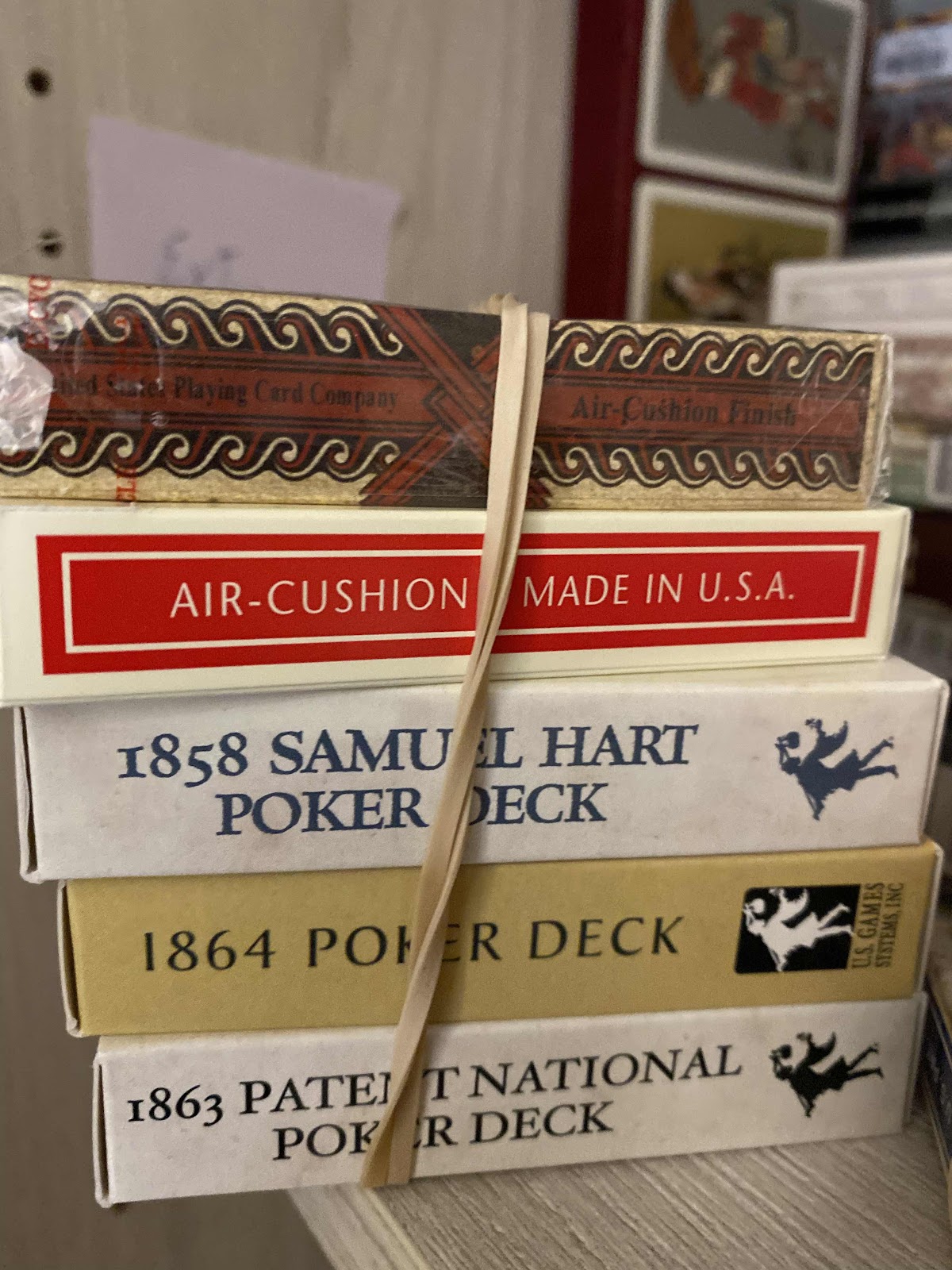 Here’s a portion of recently acquired decks that need the jokers extracted and the decks to be either stored or distributed. Note that this might be a tip of the iceberg situation since there is at least one box I know of that is full of decks like this and there could be several more boxes of them that need to be tended to. 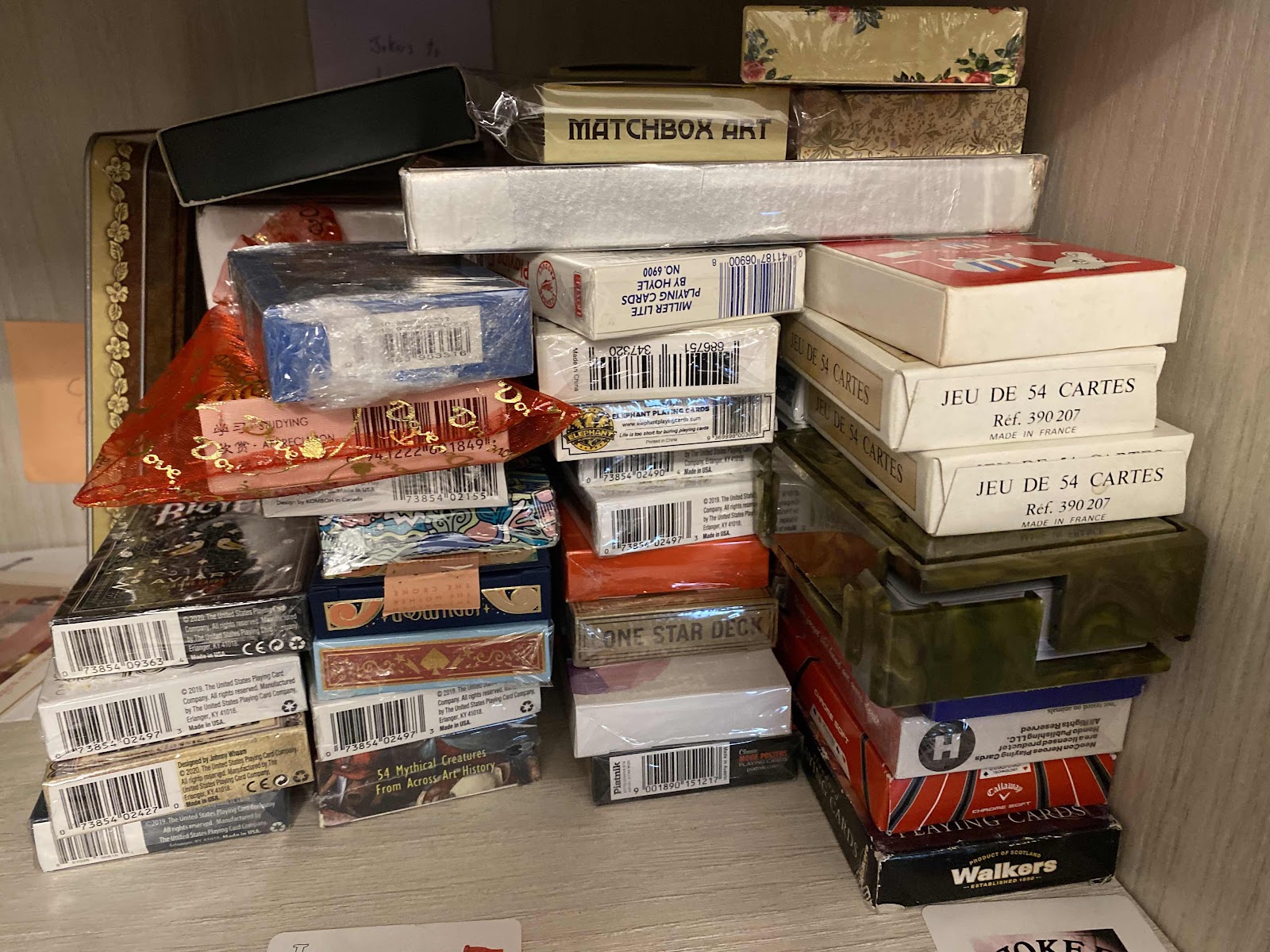 And then there’s the backlog of jokers which are wanting to be sorted. Are they new or dupes? Where in the joker taxonomy do they belong? 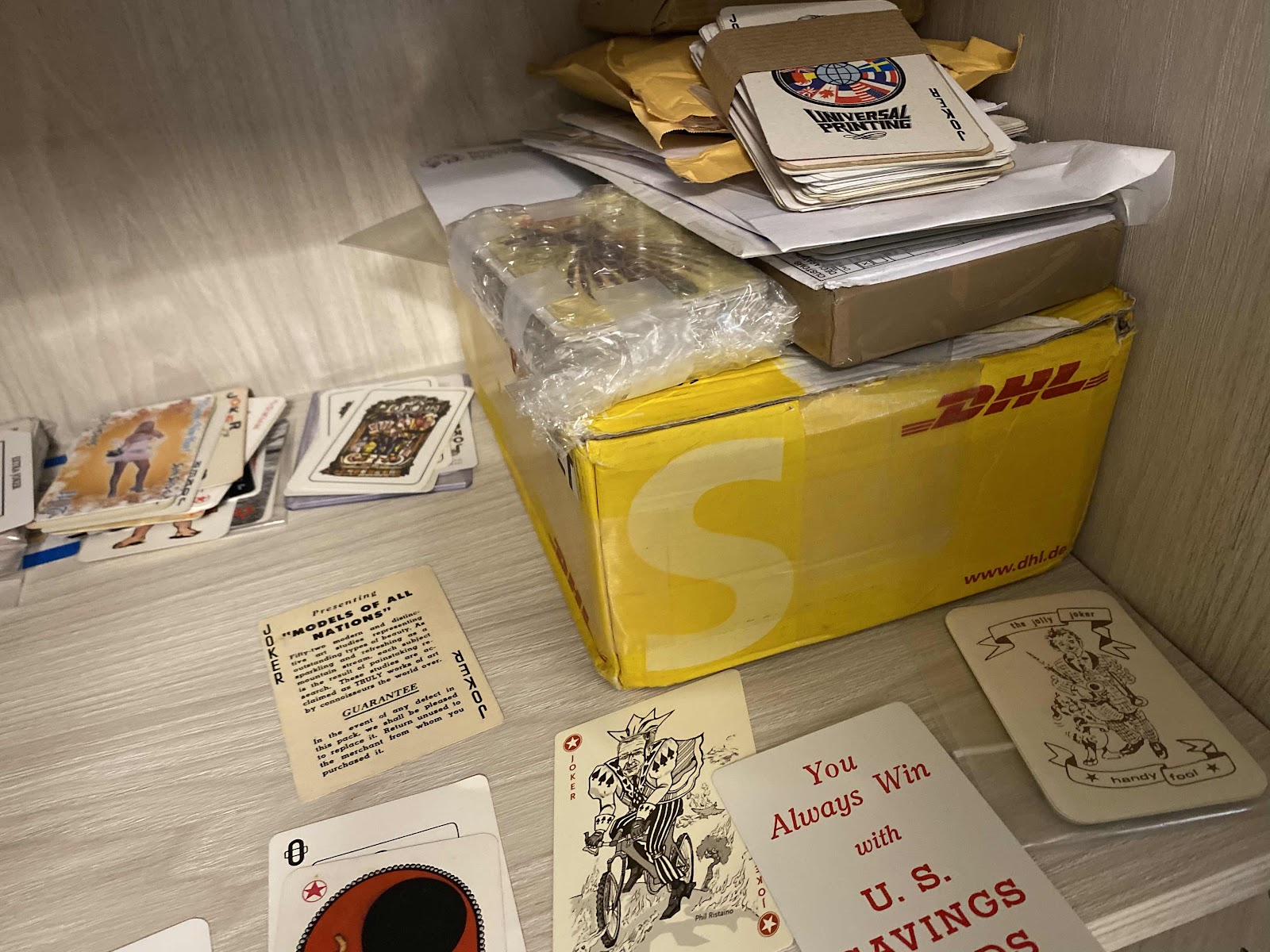 Plus there are the jokers to be organized that are currently out on my desk. 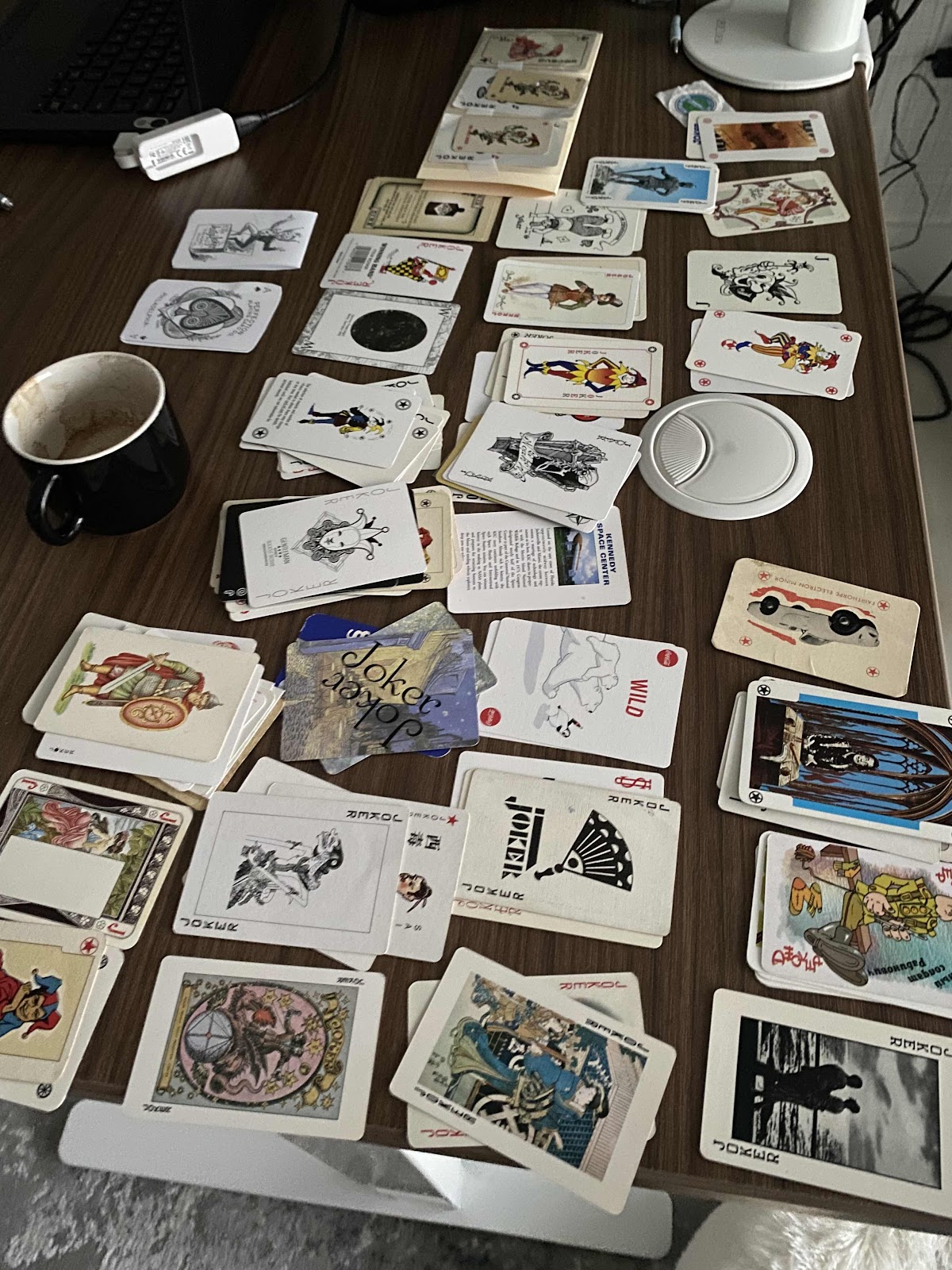 There is also the multiple correspondences, the constant eBay auctions, the social media discussions, the websites to comb through, and the commerce of finding, evaluating, negotiating, ordering, tracking, and receiving new jokers and decks. On the bright side,  every day around 5pm when I check to see what treasures the mail has brought me, I’m like a kid on his birthday. Six days a week!
And all of this so that these albums (and this digital representation of them on the World Wide Web) gets organized and grown. 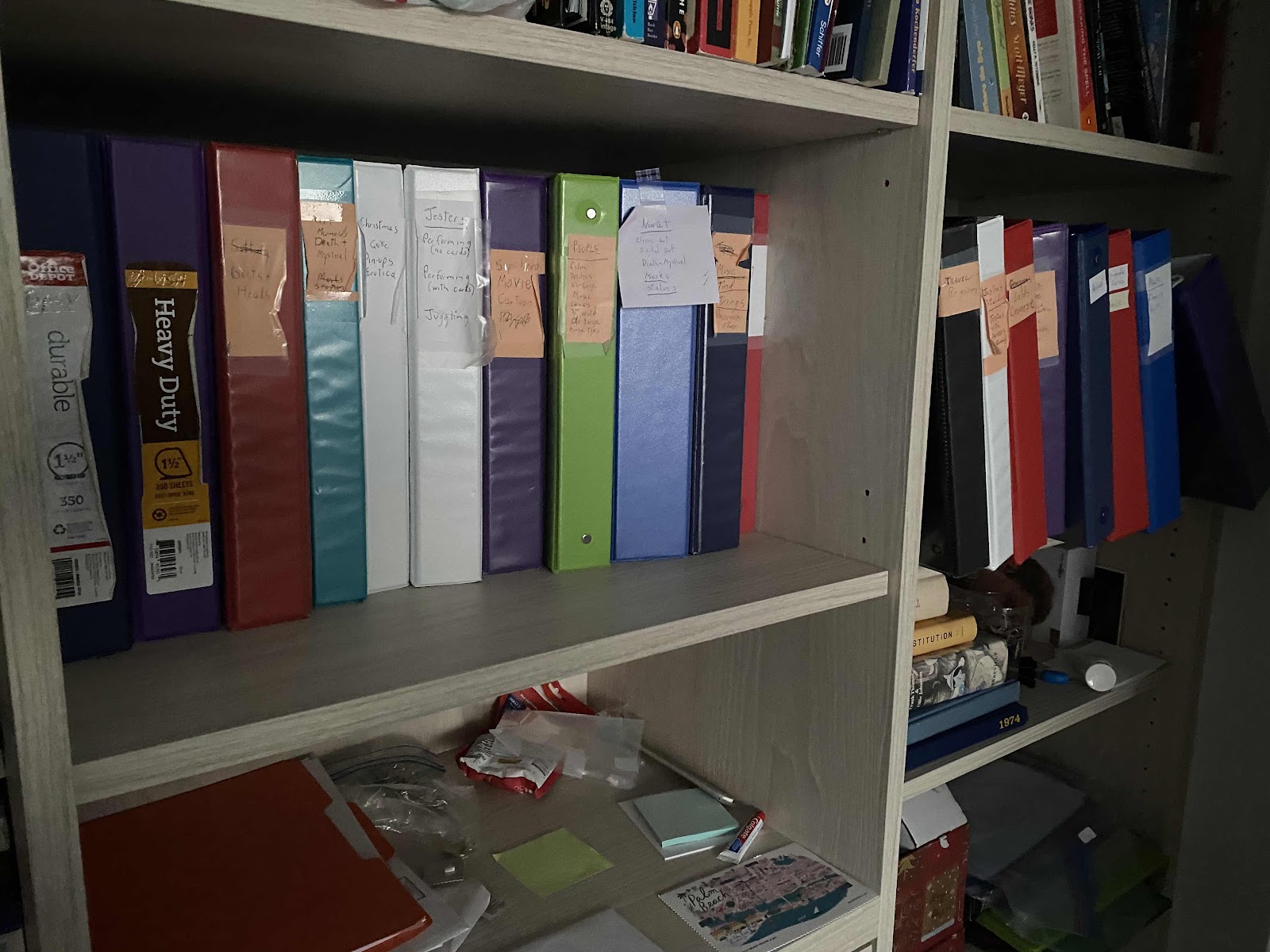 While public interest in the joker collections is admittedly not that widespread, I have some basis for believing that interest can be inspired or at the least, collecting should be respected.
One, the framed joker sets I have created are hung appropriately, appreciated, and admired. Of course, I only know about what I see when I'm there... 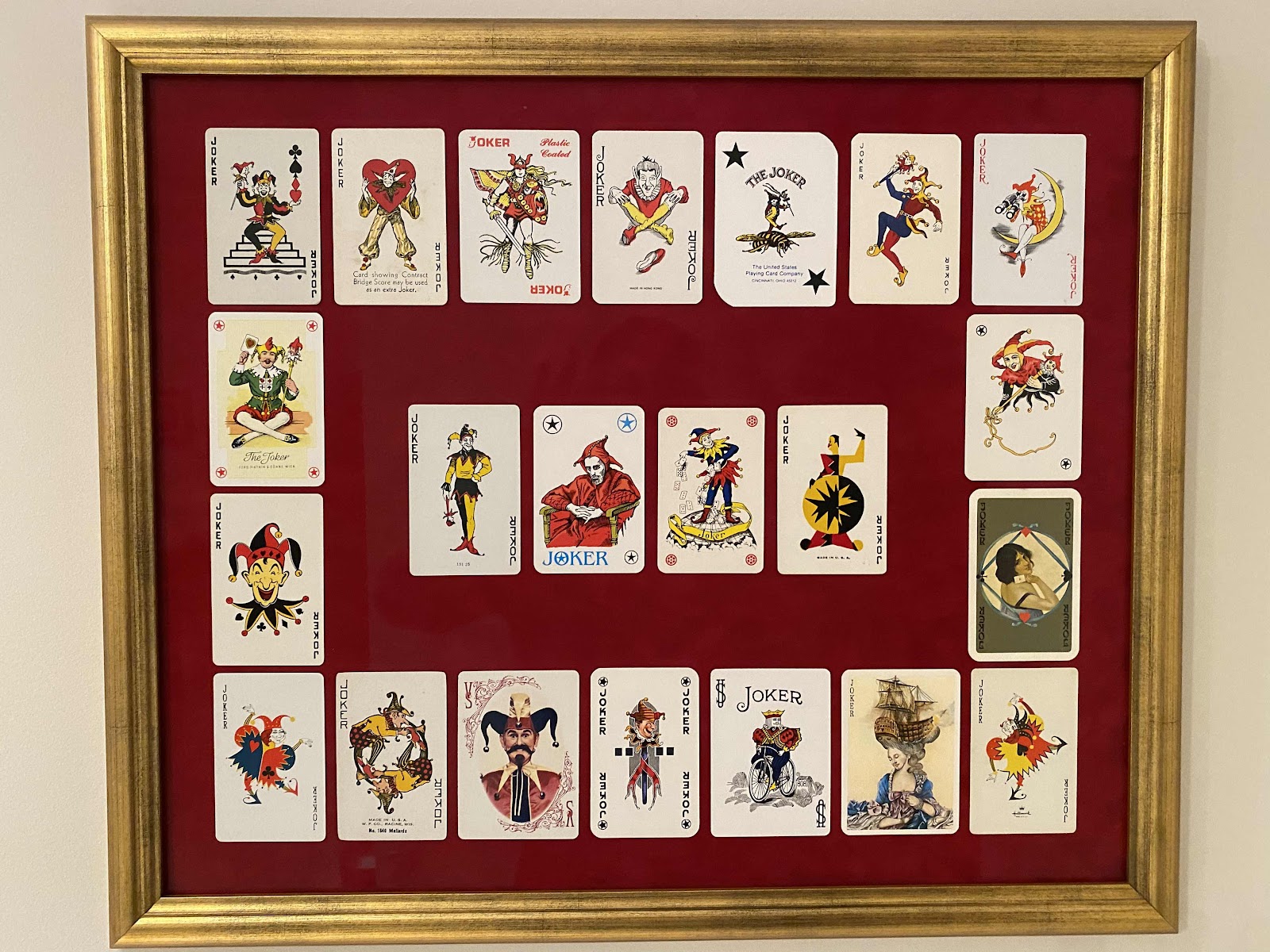 Two, the "joker sorting game" that I've created and led many people through provides innocents a first experience with jokers which  in every case, stirs the players intellect, imagination, and some aesthetic appreciation. Here's the box that I store the latest version of the game in. 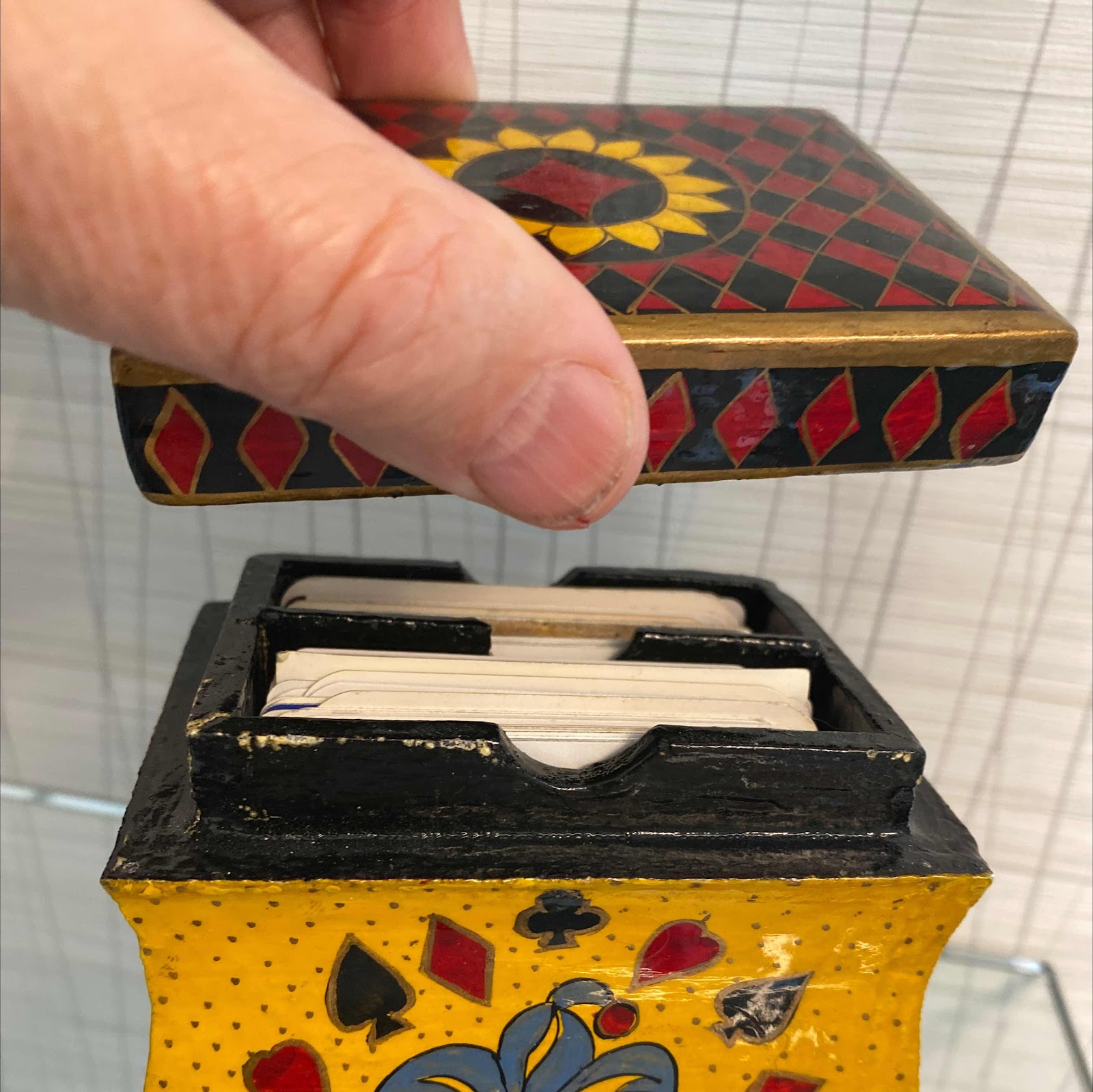 Thirdly, the Yale Beineke Library displayed, when I was an undergraduate, a historic collection of playing cards which I proudly remember. Yale Press eventually published a catalog of the Cary Collection, which I own and feature in my living room. 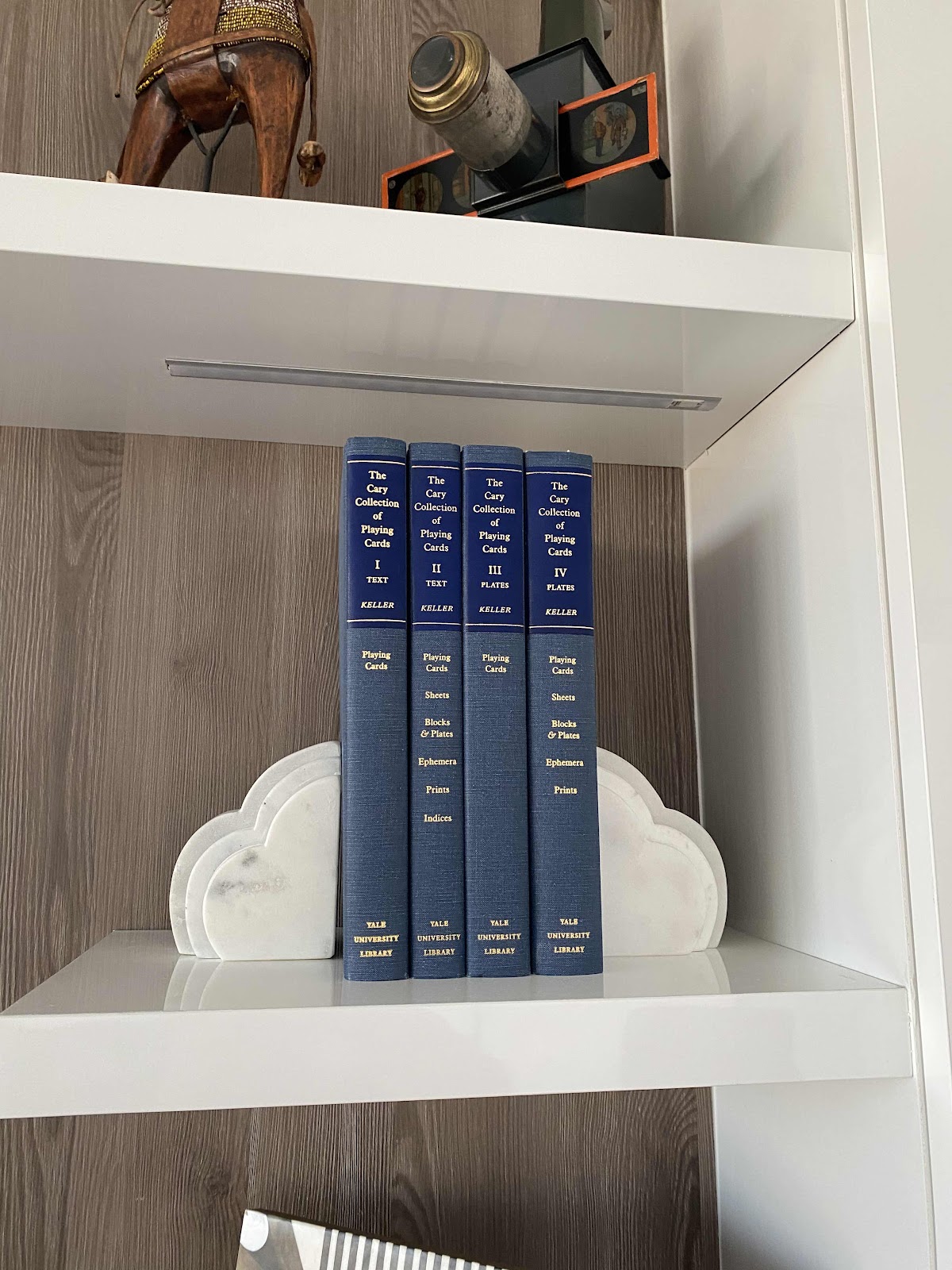 (Really astute readers might notice the hint of other hobbies in this picture. For instance, the Magic Lantern).

Now, do you think my hobby verges on being out of control? What do you know about being out of control? Would you like to share when you have walked or crossed or crisscrossed the line between enriching hobby and obsessive escapism?  I have observed that many routine activities of daily living can move from healthy to unhealthy and that the line between them is not easily defined.
Have you ever disappeared into video games? Watching TV? Sports? Reading? Gardening or home improvements? Music Business or your job? Politics? Day trading? Playing bridge (my parents’ generations typical obsessive disorder)? A cult or religion or other belief system? Shopping perhaps on The Home Shopping Network or EBay? Or something more sinister such as drinking, smoking, drugs, or gambling?
How much collecting is too much?
Wheh, that was an exciting write (or for you, read).  Would you like to relax with some Clown, Alice in Wonderland or Crescent Moon Jokers?
Posted by Johne at 6:54 AM