I have a charming set of jokers with ladies sitting on the crescent moon.  It's inside the sitting section of the collection more specifically, inside the "sitting sideways" section.

Let's start with the Moon Fairy Joker, a venerable piece of American card and joker history. This Moon Fairy joker was the joker on one of the first Congress decks that the USPC published, in 1895 (I'm not sure that this is an original Moon Fairy although it does seem to match the example from Hoffman' Card Encyclopedia on page 87.) 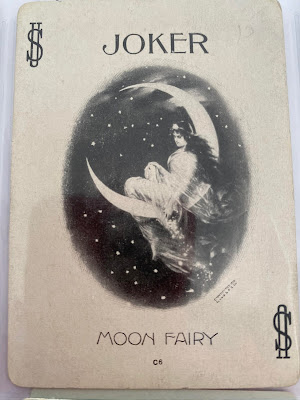 The World of Playing Cards cites an 1899 Congress Number 606 Deck that looks a lot like this. How do I tell what era mine is from? Per the Congress Guy aka Kevan Seaney, there was an era when jokers tended to match the back of the cards which is the case with this one. Here's the back of myMoon Fairy joker. 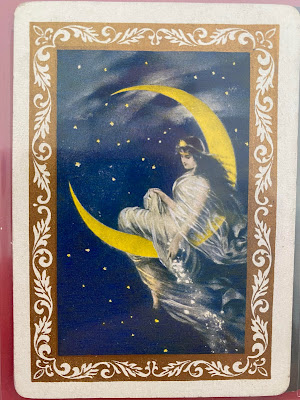 Betty Boop has her own  Betty Boop article on this blog. 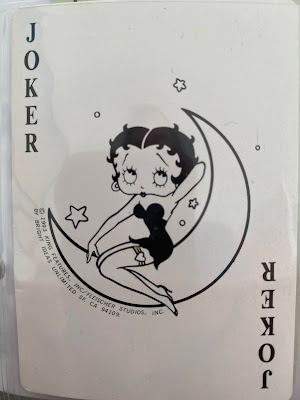 I call this one Witchie. 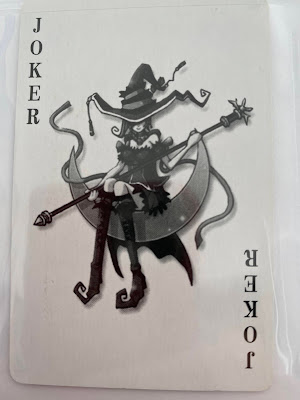 This NuVue crescent moon joker was one that I encountered a lot when I started collecting back in the 1970s. I think it was because it was the standard joker on most airline playing card decks (which were free back then) and so I collected them often. BTW, if you want a cheap thrill, next time you are on a plane and the attendant is of a certain age and asks you want you want (what she really wants to know if you want water or a coke), tell her you'd like a deck of playing cards.  It seems to transport them back to a different era and it takes them awhile to recover and smile and perhaps ask "And has it really been 40 years since you've flown?" 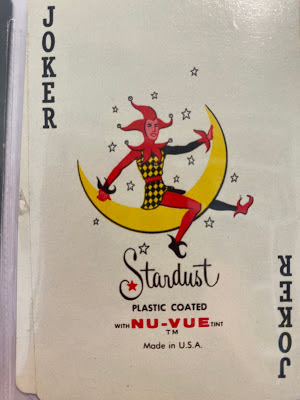 This joker troubles me since the crescent moon is facing opposite all the others.  Does that happen? 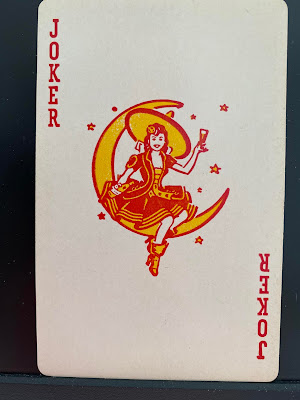 More about the joker above. This joker was  featured by Joop Muller as the Joker of the Month, June 2020. Since his research and knowledge is so deep and thorough, I'll quote:
So here she is, sitting on the moon holding up a drink, surrounded by stars and some light brown nebula's. No, she's not in the best condition. The back shows a goose in flight and advertises Miller High Life, "the champagne of bottle beer". So that's probably in the glass she's holding. Google brought some more information. Apparently this logo is called "Girl on the Moon" and there have been at least 5 versions of her. This version would have been in use in the 1950's. I think it's safe to say that the joker was made in the US, but couldn't put a maker to it. Nevertheless...... cheers!” 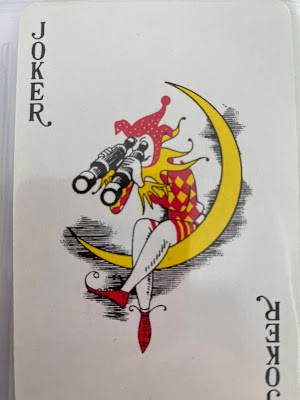 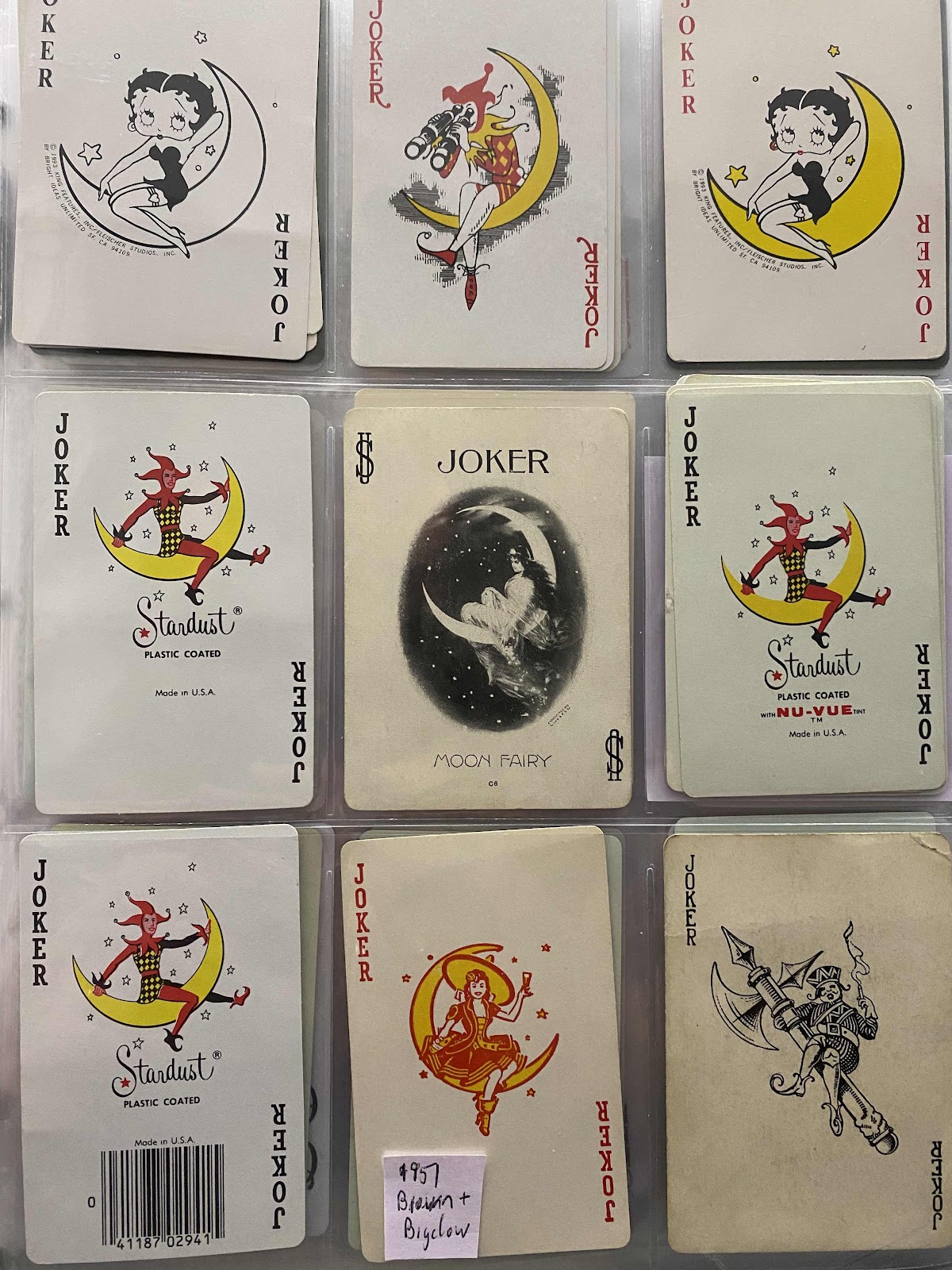 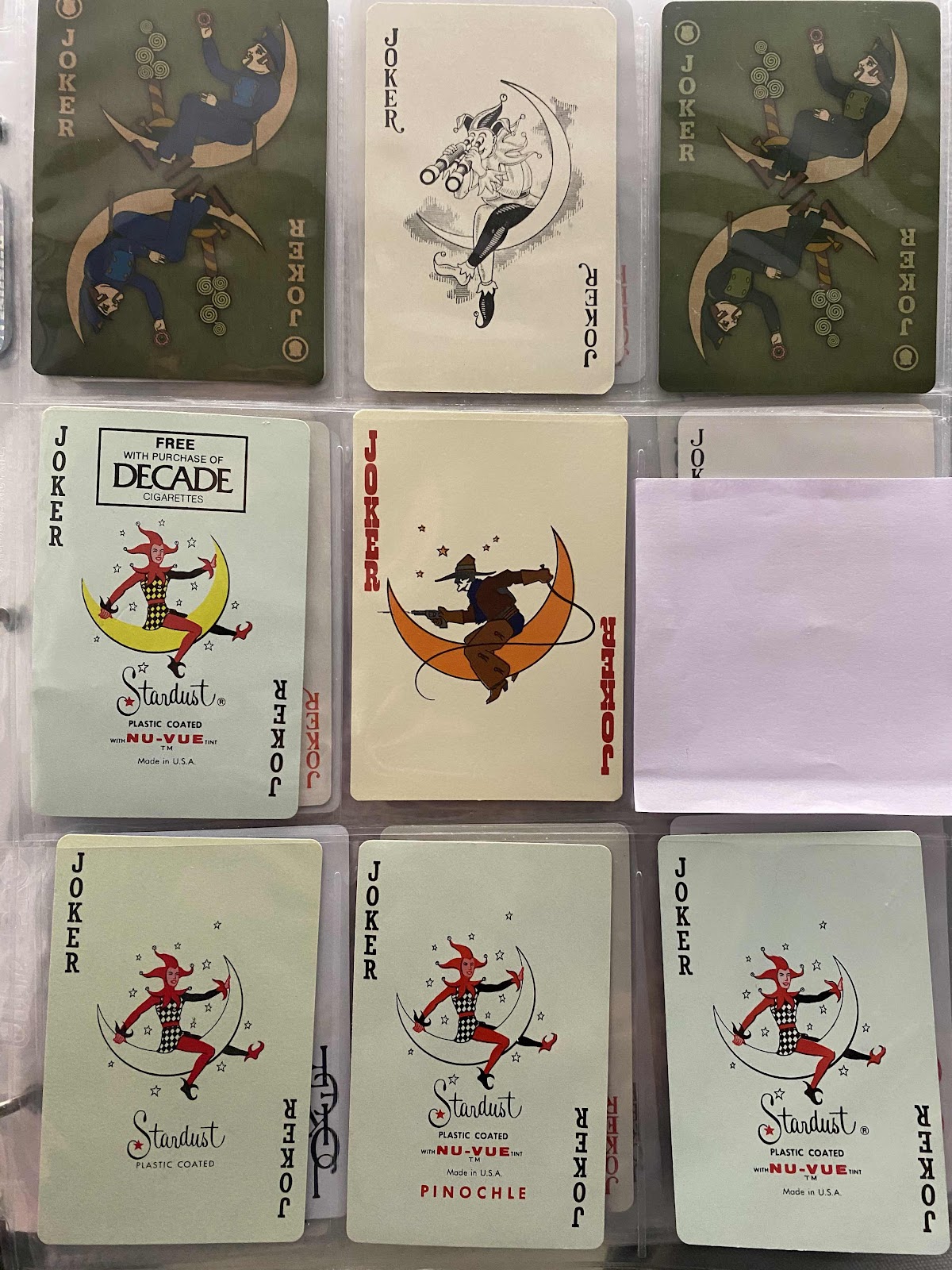 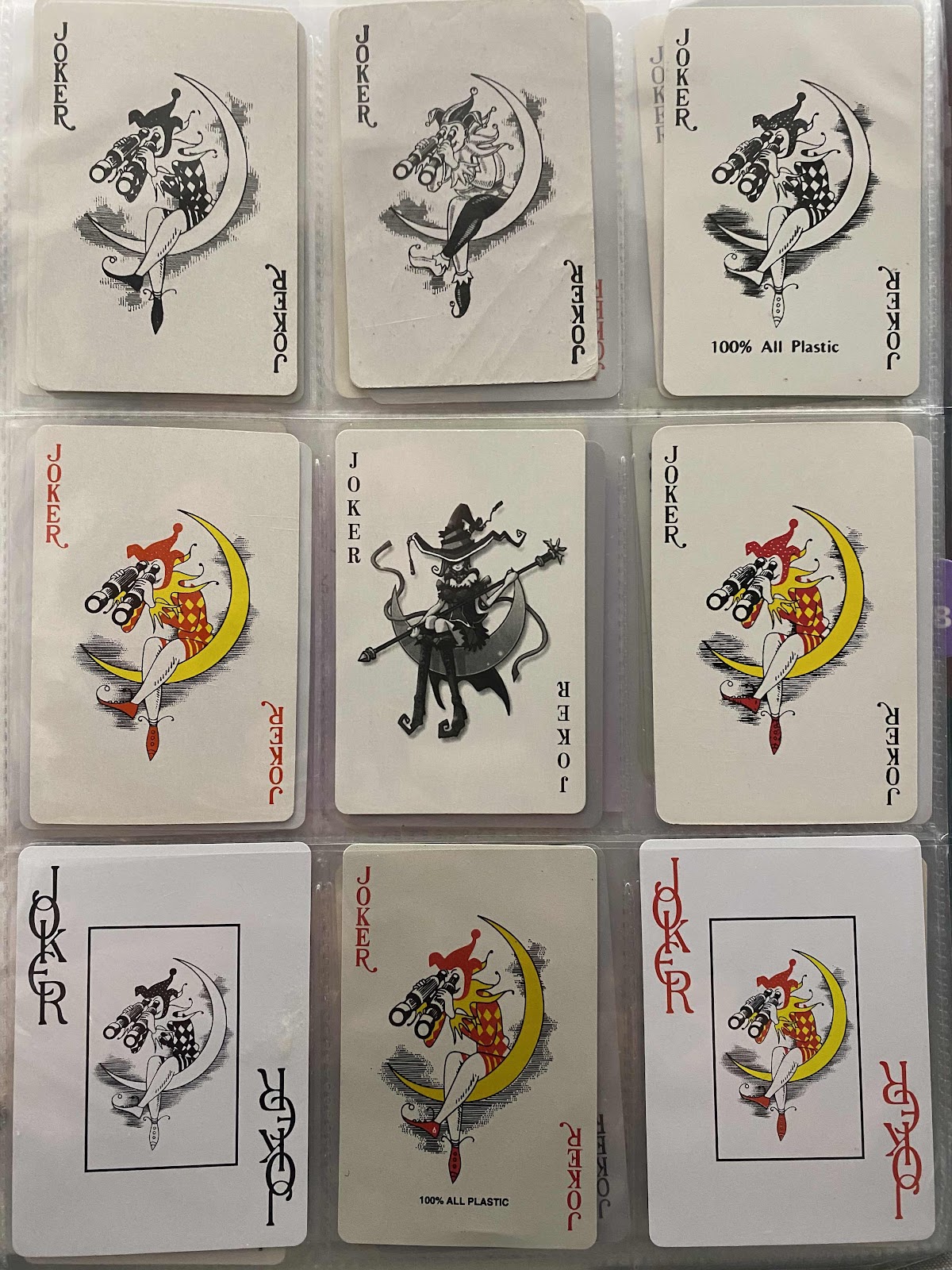 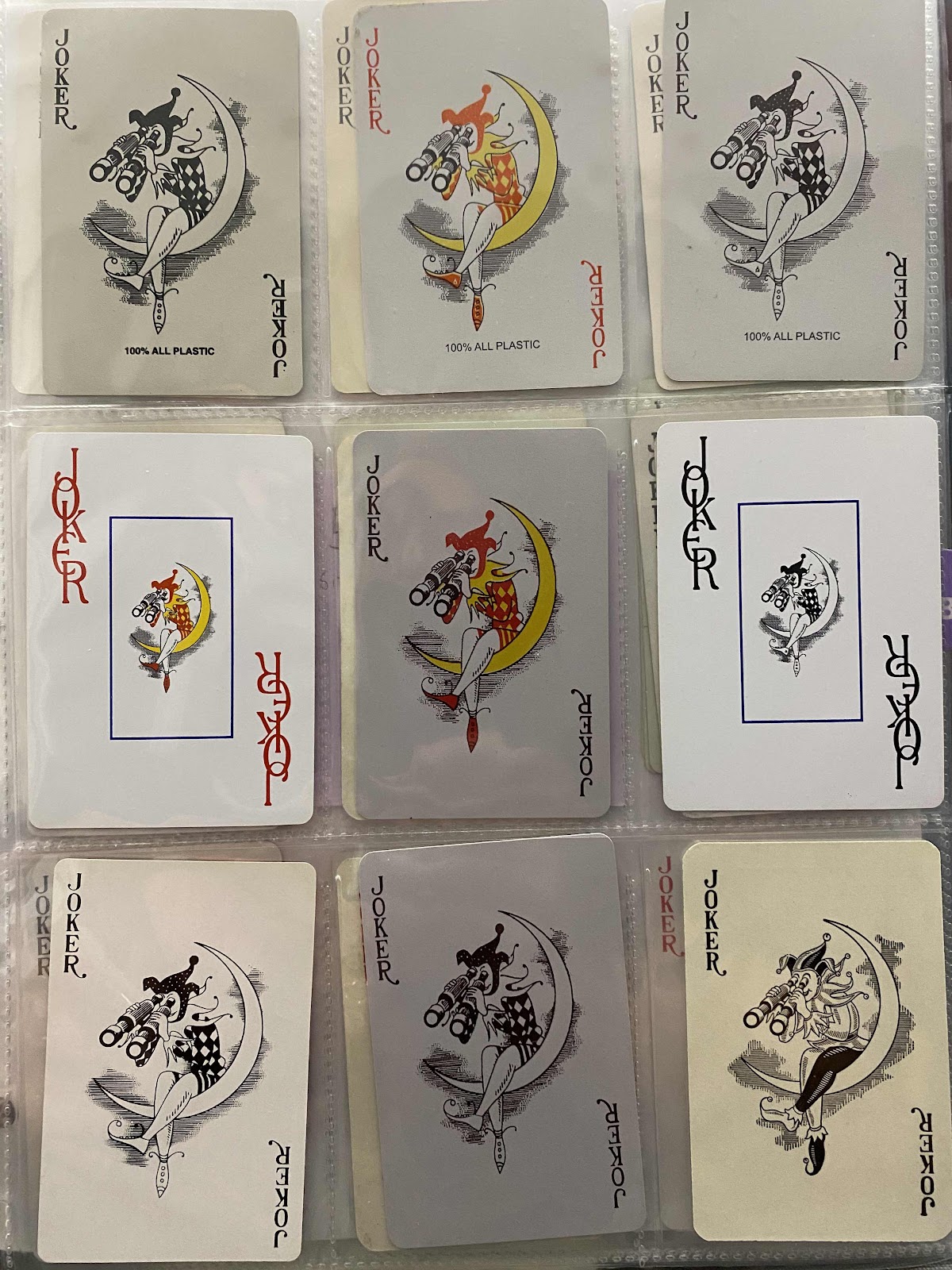 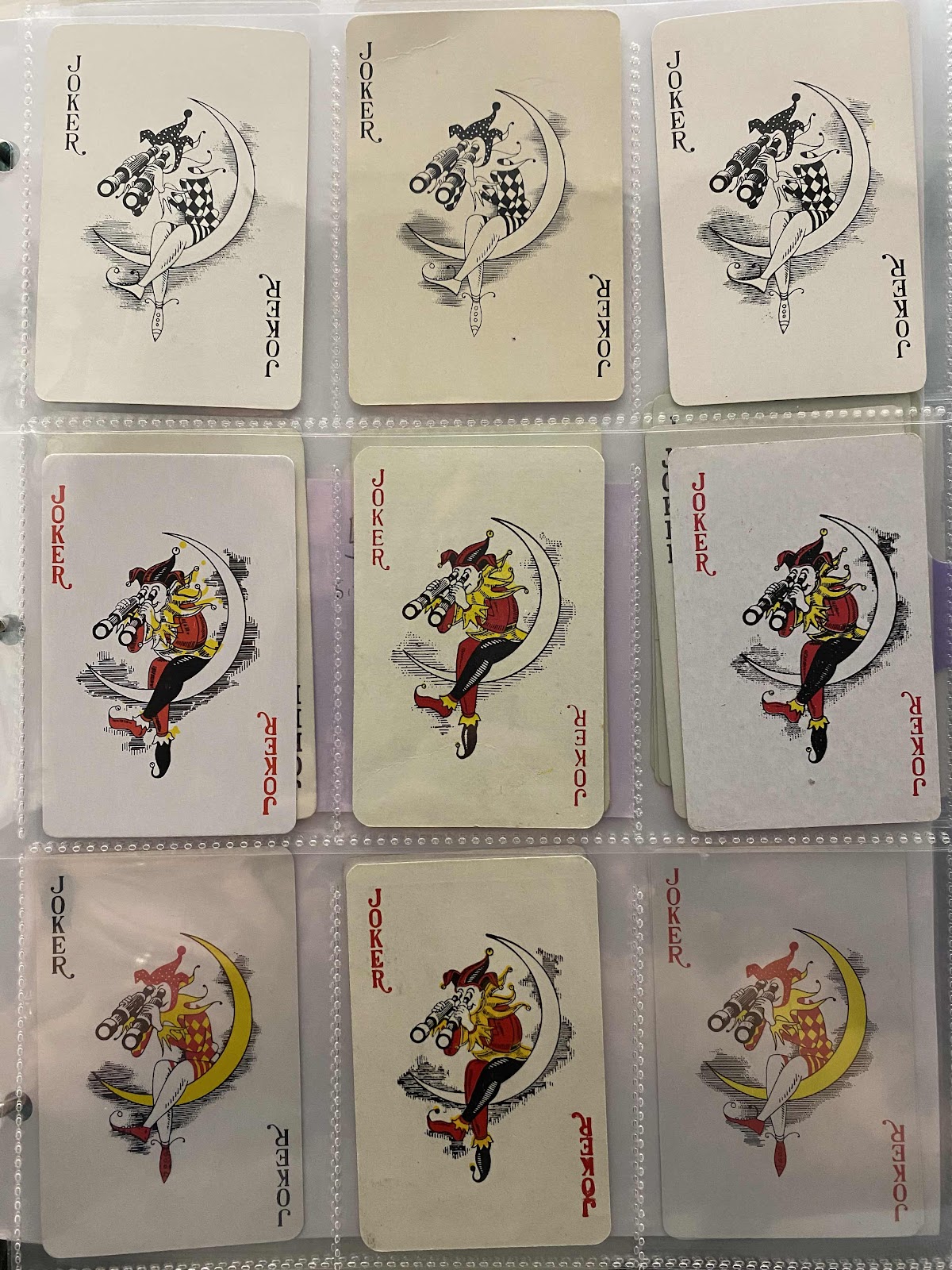 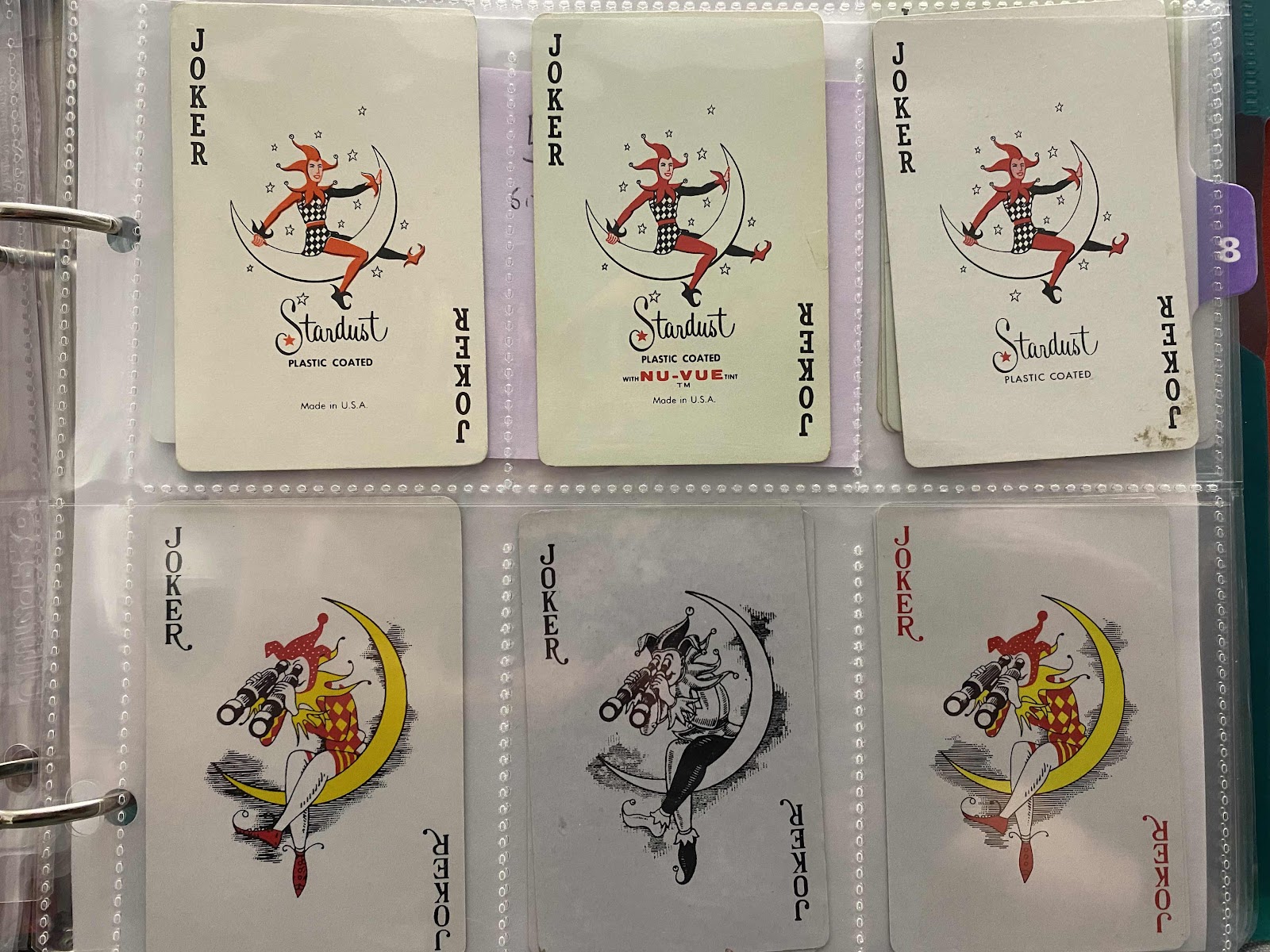 Plus there are four more topsy turvy crescent moon jokers. There are two where they have musical instruments and are drinking. (Only one is shown). 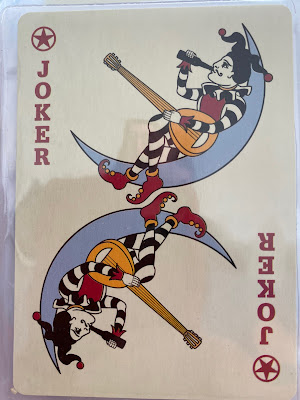 And there two (only one shown) in which they just have an instrument but nothing to drink. 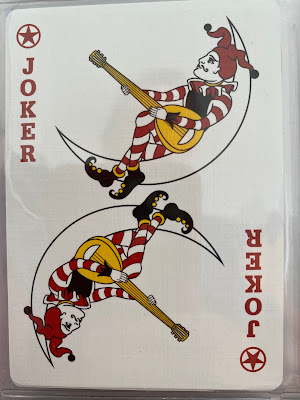 What to look at next, I suggest the:
Christmas Jokers
Clown Jokers or
Alice in Wonderland Jokers.