This section of the collection has American jokers from the 1800s. This deviates from the usual thematic organization around visual themes like animals or clowns.

The cherub in the middle of the top row below is by A Dougherty, c1910. AD45 Radbridge #201 P79 on Hochman. It was produced for Radcliffe stationary stores of New York & London. The name Rad-Bridge was put on the jokers.

The middle row of this page has three jokers published by the Gibson Playing Card Co, Cincinnati and New York.  Gibson was founded in the 1930s which totally blows by theory of this section as jokers from the 1800s. Gibson, like so many, was purchased by USPC at some point.  On P157 of Hochman, the Classique, Minerva, and Diana jokers are identified as MSN41, MSN42, and MSN 43 respectively. I believe that I also have the MSN44 High Stepper from Gibson PCC in the horse section bu since it has not been updated since May, it's not visible there yet. 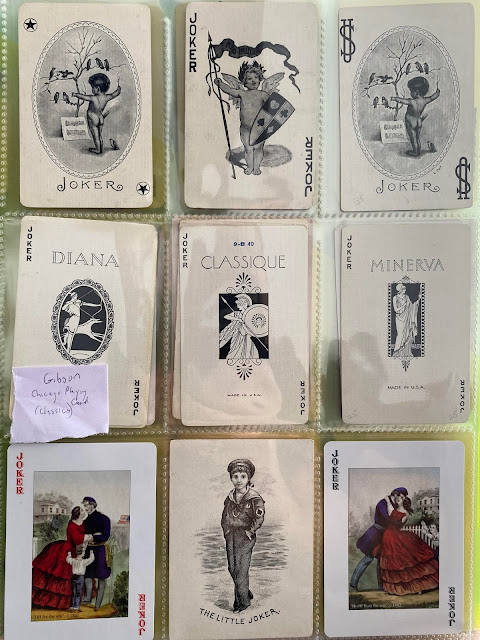 The jokers in the top corners and bottom row are the featured mystery on the article about American Folk Tales and Mythology on jokers in late 1800s. The question is what folktale or myth does this scene portray?  The joker in the bottom left corner below might be the oldest,  it's the second joker published by the Standard Playing Card Company, SU2 c1895. It has the dotted background and no product codes on it. They show up on P137 and P140 of Hochman.
The middle of the two row below is Fortuna, a Columbia PCC c1905 RU36, P135 Hochman. 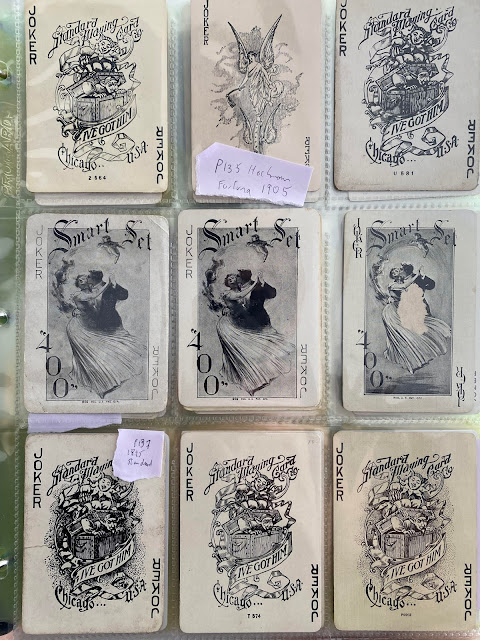 An organizational question. Does this section of turn of the century American jokers make sense as a category?  My collection is primarily thematic by image with only a few areas like this where they are collected by era and geography. Should I  disperse the cards to their respective visual themes ormaintain it as an exception to the rule?

If dispersed, where would they go?
The four cherubs should go to cherubs angels section.

The three Gibson are a particular challenge since a set should never be broken up. They could go to the mixed animals section which is built for sets where one is an animal. Two of the Gibsons have weapons (bow and arrow, spear with shield) so they could go to the armed jokers section.

The three Smart Set would go to the Jokers Dancing section although they would fit poorly with the others who are primarily jesters. They could go in the Americana profiles people section.