Topsy Jokers with Clowns or Jesters

These topsy jokers feature either clowns, jesters, or other harlequin-type characters.  These jokers are two-headed, otherwise known as mirrored, full duplex, reversible, or topsy turvies (turveys?)

I just added one more today, May 1, 2022.  Both jokers with the deck were identical so I have a duplicate joker for trading. 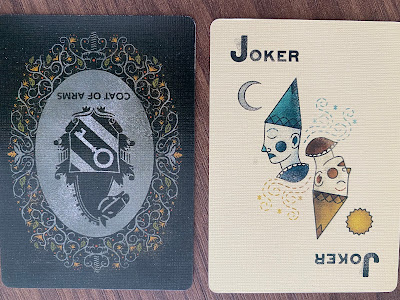 Here's three more that I just added, Aug 2022. The first pair are from an Oak Meadows (virtual school) promotional deck. 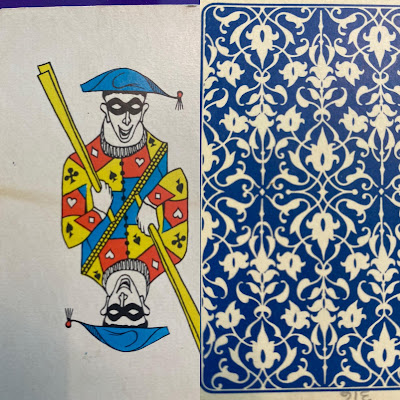 Here's the complete set of topsy turvy jokers. There's 80 something of them so far. 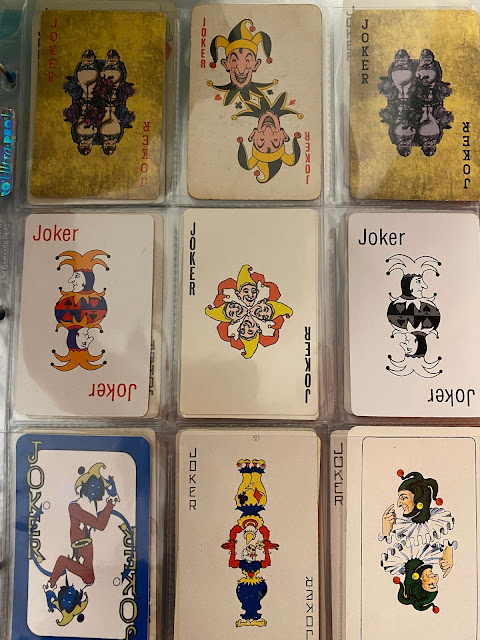 You may well ask, what is going on with the next two pages of jokers? They all look the same! Well, the fact is that is what I thought for many years. But recently, I've become more intense about my  jokers and I've seen that these next ones have different wording as the bottom. Two of them have no lettering at the bottom but slightly different coloring, one has only manufacturing info at the bottom. Then they have numbers and names. For instance, there is No. 19 Sitting Pretty. Followed by No. 84, Mill Stream.  Somewhere, maybe someone has named, collected, or catalogued all of these that exist.
I think of this joker as Jesters chasing their tails in a circle. This two headed joker is the Standard Western Publishing joker. Strictly speaking, it is symmetrical since one side of the joker has the publishing info.   I think the  numbers are sequential in order of publication.  "Portraits" probably refers to the name of that deck. The lowest number deck I have is "No. 28, Sitting Pretty", the highest is "No. 9101 Frou-Frou." I have over two dozen of them in my Topsy Jester section.   In any case, here's the 15 that I have in order of their names. Note that I surely have a lot more in my dupes section which I have not reviewed since I started to pay attention to those numbers and wording at the bottom. 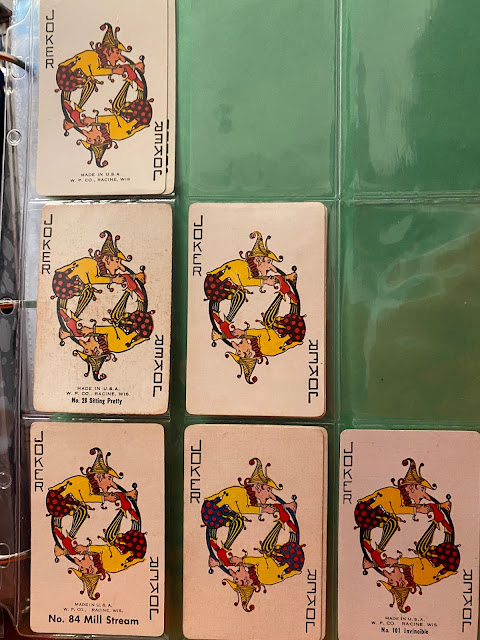 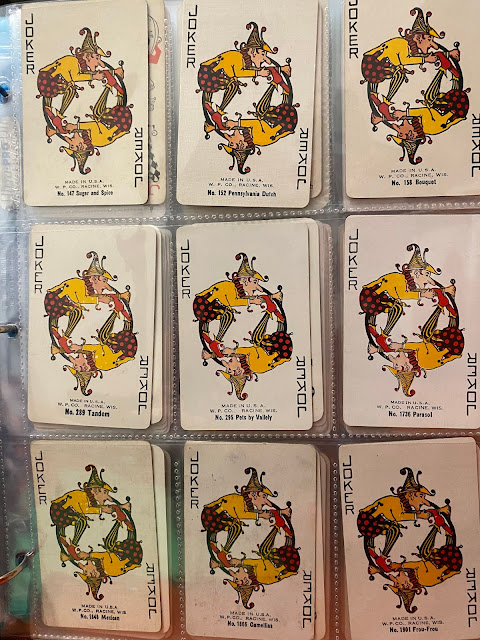 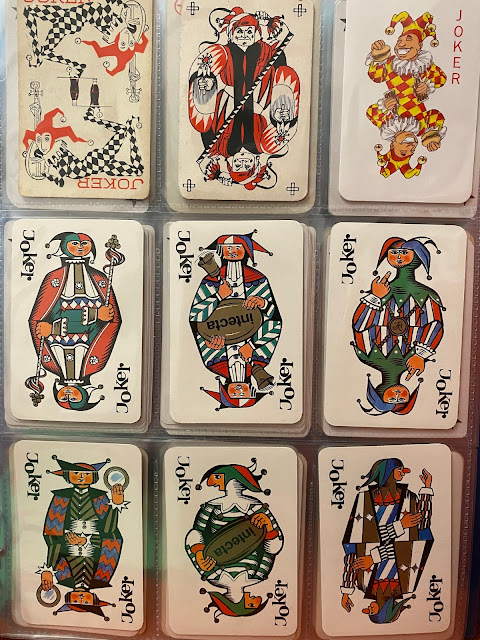 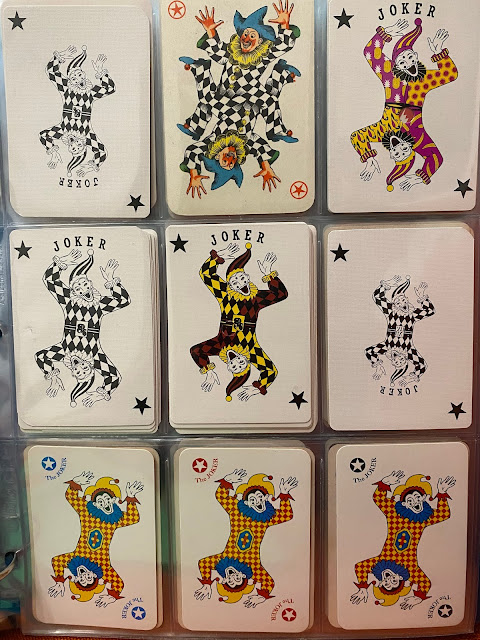 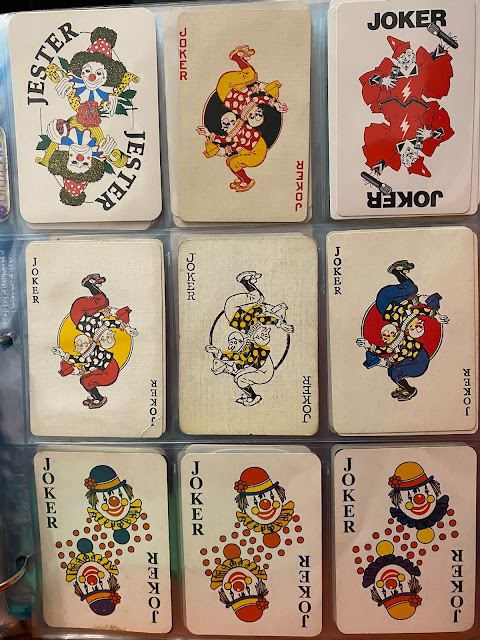 Here’s a close-up of the original Midlands Pinwheel joker, 1920. 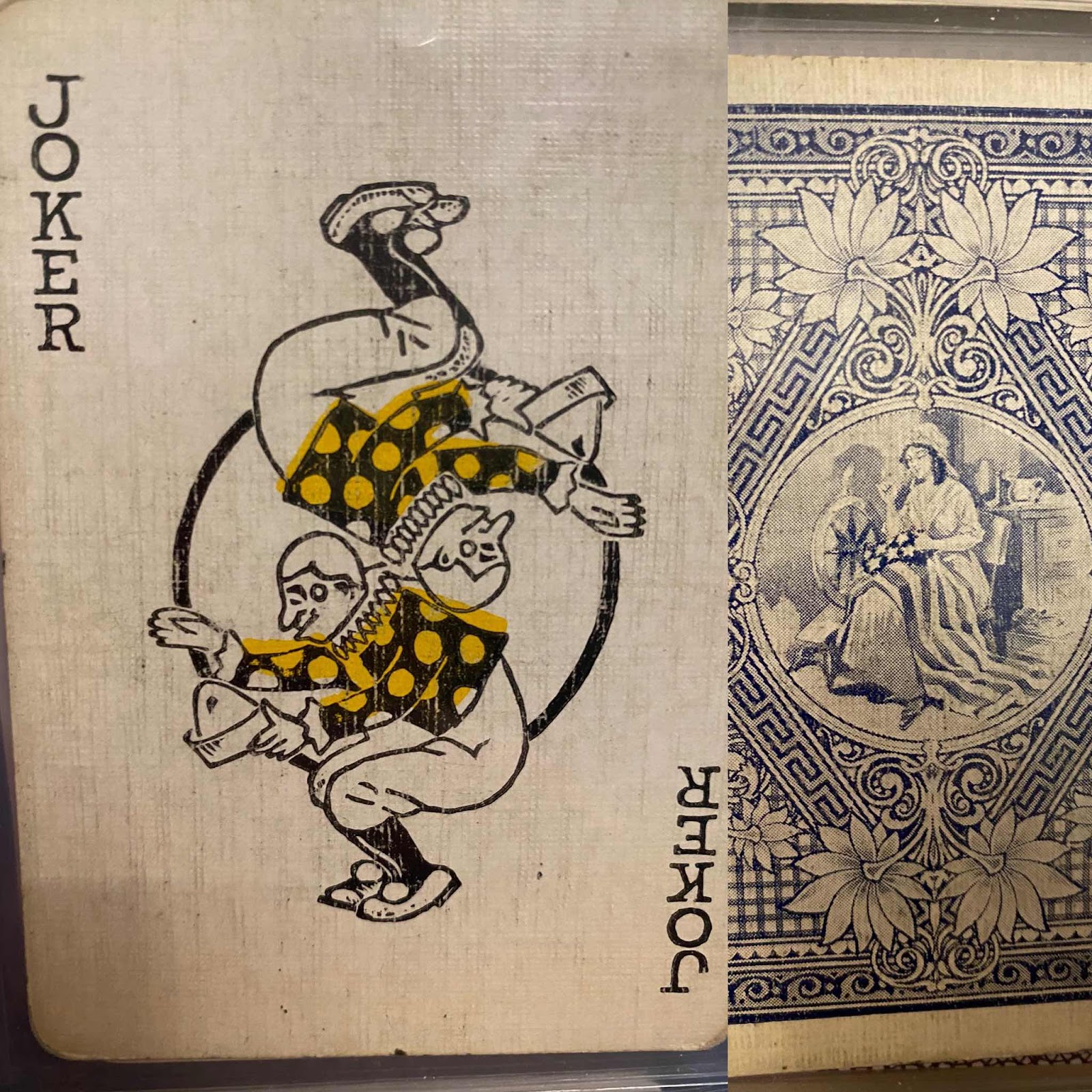 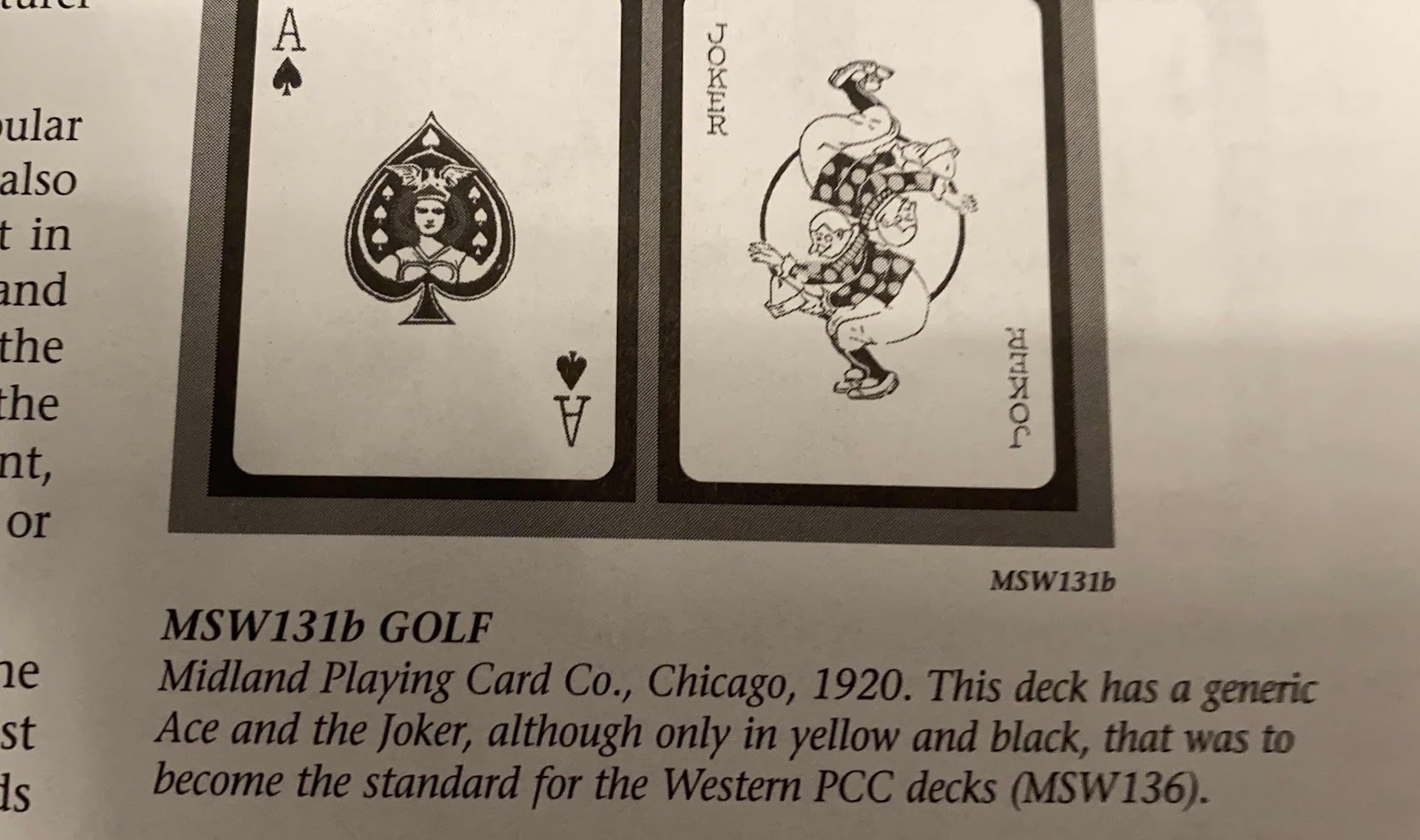 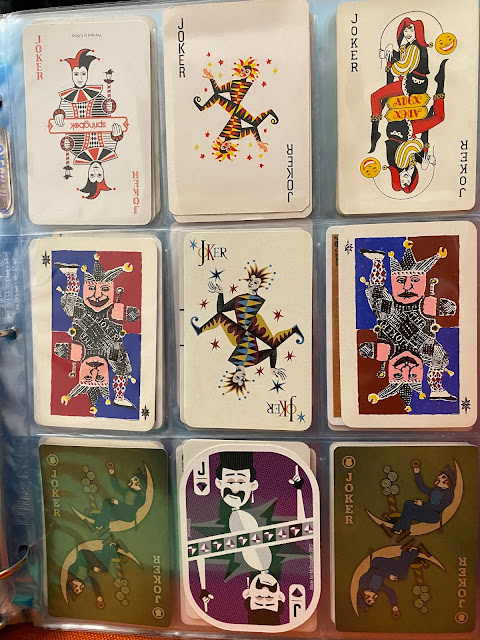 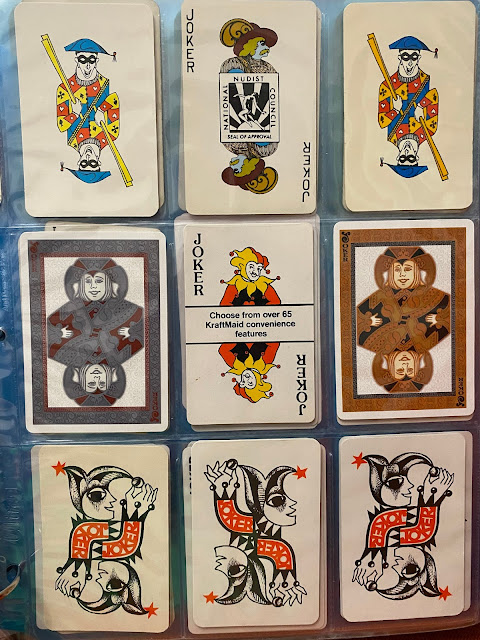 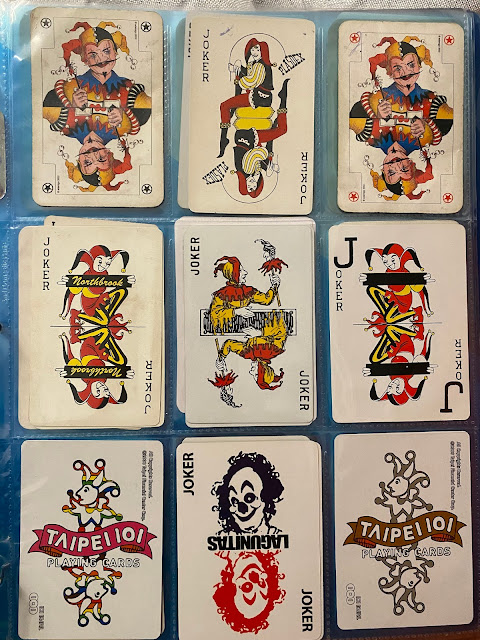 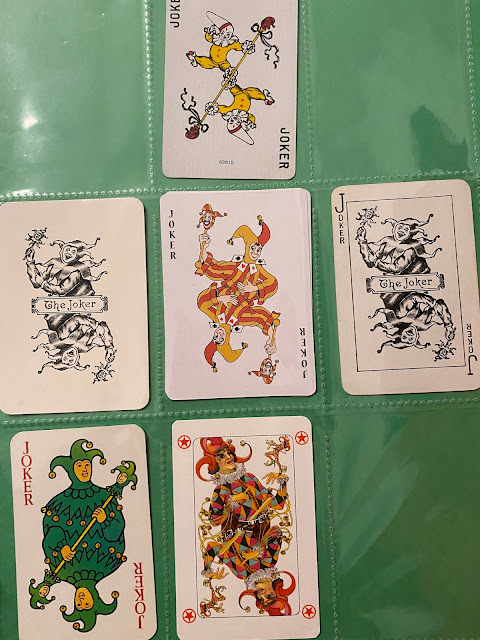 The topsy turvy section has subsections that mirror the overall organization: