Here is a directory of some resources for joker and card collecting. Clubs, books, stores, collectors, designers, publishers, and other resources for joker collectors. It's an ambitious idea which tilts towards those that I find useful or interesting. For suggestions, just put it in a comment.
A Joker Collection, organized by themes. Amused by Jokers Am I dot com. This is my site and l list it in case someone takes this listing and puts it somewhere else. www.AmusedByJokersAmI.com

United Cardists -  a forum promoted by @pipchickadee PipChick  Anyone can vote.
DXPO - more about this later, it's fantastic!
The English Playing Card Society and The World of Playing Cards
Playing Card Decks.com -Very useful. Example: How cards are made and Intro to Cards
Bicycle Backs Directory.
Congress Cards by the Congress Guy
Books and Catalogs - Key Resources
#1. Hochman Encyclopedia of American Playing Cards by Tom & Judy Dawson. If you don’t have a copy, get one. Maybe two in case you lose one and they go out of print. It is a better resource than us collectors deserve and I am very grateful that it exists. There's also a price guide but I haven't seen it.
Paper Empires Vol I by Jason McKinstry. C 2019. It looks broadly at the early card makers detailing an extraordinary amount about them.
I've heard talk of A Fournier and Segeth catalogue and book. I'm looking for them
Forgotten People of Playing Cards  by David Seaney
An inventory of Bicycle Decks - Bicycle Cards.org by Joseph Piersonabout the history of Bicycle Playing Cards produced by the Russell and Morgan and the United States Playing Card Company.
Museum Level Playing Card Collections
The Cary Playing Card Collection at Beineke Library, Yale University. (I own a copy of the catalog and was an undergraduate there when the collection was put on public display in 1979) but there is no public display. The Cary collection grew by buying the Tom and Judy Dawson's collection in (year?).
le Musée Français de la Carte à Jouer - French playing card museum in the SW Paris suburb Issy-les-Moulineaux
Fournier Playing Card Museum in Victoria-Gasteiz  - Northern Spain, SE of Bilbao
Museum of the Playing Card of Turnhout in Turnhout Belgium (not far from Antwerp or Brussels)
Bibliothèque Nationale de France (the Grimaud family collections) but it is not on display
Deutsches Spielkartenmuseum of Leinfelden (extraordinary collections but no place to show them).
IPCS maintains a more comprehensive list of playing card museums
Where to shop: Market Places
Ebay !
RubyLane
Etsy
Potter & Potter - Here's a catalog from a Gambling with Cards auction, May 2017.
http://playingcards.wikidot.com/other-uspcc:arrco
Cartorama (German)
Where I shop:  Card Publishers and Distributors
Midnight Cards - My favorite! Randy Butterfield did me a big joker favor years ago for which I am grateful! Thanks.
PlayingCardDecks.com - I might spend the most here
Ellusionist.com- great decks
ElephantPlayingCards.com  EPC    Ben Jones
Peter Woods - published by NewtsGames.com - UK
Prospero Art
Seasons Playing Cards
UUSI Fine Art
Art of Play
PlayingCardDecks.com - I've probably spent more here than anywhere except Ebay
Empire of Kings and Queens - Where he wonders what is the message from cards
Kardify - card and magic vendor
Collectable Playing Cards Vendor
Games et al - English Gallery of old playing cards and board games.
Gamblers General Store -
Penguin Magic and Cards - I just looked at my receipt from Penguin and I found this nice touch (btw, my name is John) 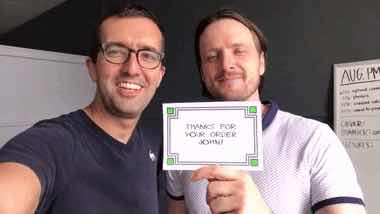 Conjuring Arts
Games et al - English
Denexa Games with their plastic cards, great card and game info, and their tryptik dragon jokers. Btw: I think I’m misspelling and misusing that word. It’s not a 3 panel piece of art, it’s a two.
Joker Collections - I would like to have the time to describe each of the joker collection sites talking about what's interesting and strong and unique about each one. Of course, I will one day but it's a question of time....I'm also interested in profiling the joker collectors. What sorts of people collect jokers?
jokeroftheday.com
AmusedByJokersAmI.com
DXPO - more about this later, it's fantastic and in many ways, a model of excellence!
Emile's Collection of Spanish, Italian, and German Jokers
A Polish Collection by Alexander
Emile Kiderlen from Holland's Joker website -
Johnny Jolly Jokers
Pascual Francisco Antolí - Pascual's Facebook page has a great display of  black and white jokers. There are 28 rows, 9 per row, plus a few on the bottom. I figure ~255. FUN!
Well-known playing card collectors,  historians, and articles
Quoting from the Congress Guy's June 2022 article in “Clear The Decks”, 52 Plus Joker’s quarterly publication
Some of these well-known collectors and historians are Judy Dawson (who should need no introduction. She and her husband Tom created the modern version of the Hochman Encyclopedia which is more than I deserve), Jason McKinstry (Paper Empires, ie early manufacturers), Joseph Pierson and Scott Kruse (Bicycle), DaveSeaney (National Card Company and Forgotten people in playing card history),  Matt Schacht, Glenn Currie, Colin Brady (Congress, Souvenir, others), Lee Asher (Patents and other areas), and Gejus van Diggele, Paul Bostock, Joop Mueller (European).
History of the Joker - Phil Neille - (Scroll down to "The Blank Card Comes of Age in Euchre" and I'll quote some here:
"It appears that Samuel Hart was aware of the “blank card” being used as a third and best bower at least by 1857. Catherine Perry Hargrave noted in her book A History of Playing Cards, that a joker by Samuel Hart in his brand called Club House Cards, dated 1857,(13) appears to be one of the first jokers. Another Joker card by the American Playing Card Company made their famous patriotic Union Cards, dated 1862, and is in the collection of the National Museum, Smithsonian Institution.(14) What is also of interest is that another joker card of 1863, by Samuel Hart, was labeled as an “Imperial Bower” – “This Card takes either Bower.”(15) Hart’s joker of 1863 was not the first joker as some card historians have claimed. At least two jokers were made before 1863 and possibly more but were lost to history."

USPCC
Fournier
Cartamundi
Smaller card companies
Expert Playing Cards Company.
Legend
Denexa Games
other stuff to be sorted...
https://www.collectorplayingcards.com/
https://cartorama.de
http://www.epcs.org
http://www.indiana.edu/~liblilly/dbs/goslingcards.shtml
52plusjoker.org%20club
http://a_pollett.tripod.com/
https://www.altacarta.com/english/index.html  info@altacart.com
Dot Pattern
Instagram & Pinterest accounts -list?
Ie
instagram.com/collectorplayingcards
Online Resources on Cards...
International Playing Card Society - I-P-C-S.org  £49.00 GBP
Final Answers by Gerard P Michon. It has a lot of card history.
Playing Card Decks - Amazing collection of articles on cards. History, manufacturing, finishes etc.
------------------------
(SAVE ALL THIS from Final answers FOR AN ARTICLE ABOUT CARD HISTORY - I can quote him there)
Also, Gerard explains the emergence of the modern joker this way: "In the old game of  Jucker  from  Alsace,  the two most powerful cards are two jacks of the same color  (called  Juker,  regionally, or  Bauer  in German).  When that game was exported to the United States, its name was distorted to  Euchre  and  Bauer  became  Bower  (both spellings approximate the German pronunciations).  The game was originally played with a  deck of 24 cards  (it still is).  An American innovation was to introduce one extra card, called  best bower  that would take either bower...  This became known as  the Jucker card.  The  joker  was born."
Posted by Johne at 12:09 PM 3 comments: