I post this section on Americana Jokers on Memorial Day 2020, the first year of the Global Covid19 Pandemic. And because it's Memorial Day and I think the way I do, I'm reflecting on these symbols and going to share some thoughts about these site (or is it sights?)..

The Americana jokers, a subsection of the travel section, is closely related to the Real People / Americans section, American politicians (that's a different part of the collection), American scenery travel jokers, and entertainers like Elvis or Sports Figures.

First, the Stars and Stripes with the American Eagle. 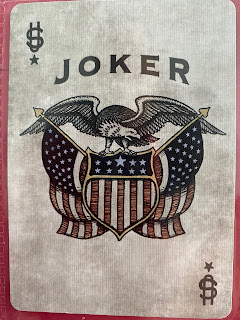 Next, the Statue of Liberty. It stands on Ellis Island and if you arrive at the USA through the NYC Harbor, it's one hell of a sight.  The Mother of Exiles was constructed for the US Centennial Anniversary. It was designed and donated by France. Moneys were also raised in the US and a poem was written as part of this effort.

It's a statue of a female welcoming the refugees. The word "homeless" appears in the sonnet quoted at its base. And while its a statue of a Womyn, this is no madonna focused on her child. There's no hint of subservience about her.  She be powerful.

The Statue of Liberty is inscribed by a poem written by a women.  Much of this statue's imagery runs counter to current thinking both from the American Right (Poor people stay out of the USA) and from the Leftist Feminists (There's been no American historical respect or recognition for women).

Here's the inscription:  Give me your tired, your poor, Your huddled masses yearning to breathe free, The wretched refuse of your teeming shore.... 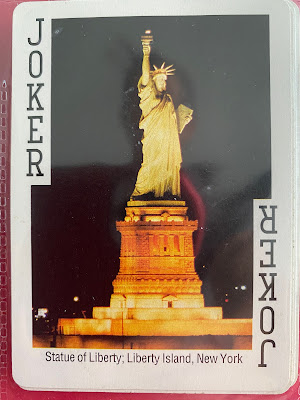 Here's The New Colossus poem in its entirety by Emma Lazarus:
Not like the brazen giant of Greek fame,
With conquering limbs astride from land to land;
Here at our sea-washed, sunset gates shall stand
A mighty woman with a torch, whose flame
Is the imprisoned lightning, and her name
Mother of Exiles. From her beacon-hand
Glows world-wide welcome; her mild eyes command
The air-bridged harbor that twin cities frame.
"Keep, ancient lands, your storied pomp!" cries she
With silent lips. "Give me your tired, your poor
,Your huddled masses yearning to breathe free,
The wretched refuse of your teeming shore.
Send these, the homeless, tempest-tost to me,
I lift my lamp beside the golden door!
One more Statue of Liberty. This one is from a deck published starting in 1912 published by Ruseell Playing Card Cards and Kalamazoo, It's Ru18 Hochman P131. 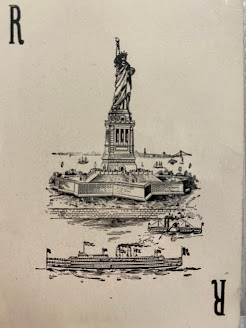 Here's The Stars and Stripes. Not much more to say about her...I do like the way my image is reflected in this picture of the flag. I am a "Navy Brat" as in my father was career Navy and a Naval Academy Graduate. 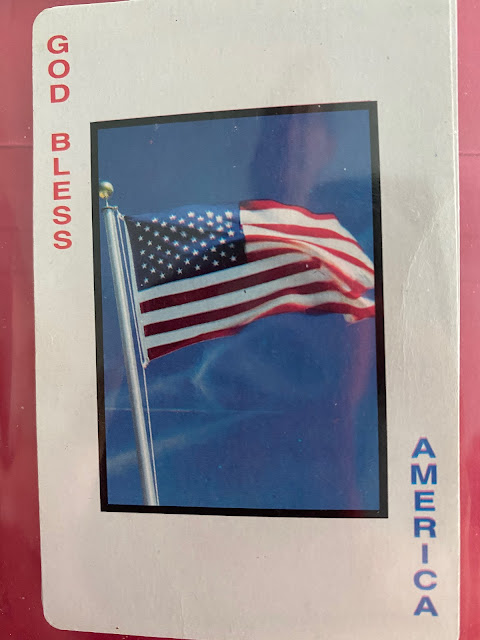 Here's a joker of a classic war memorial. Cannons, cannon balls, muskets, and eagle. I feel like I should be able to date it from the munitions. Is it an Independence or Civil War Era memorial? 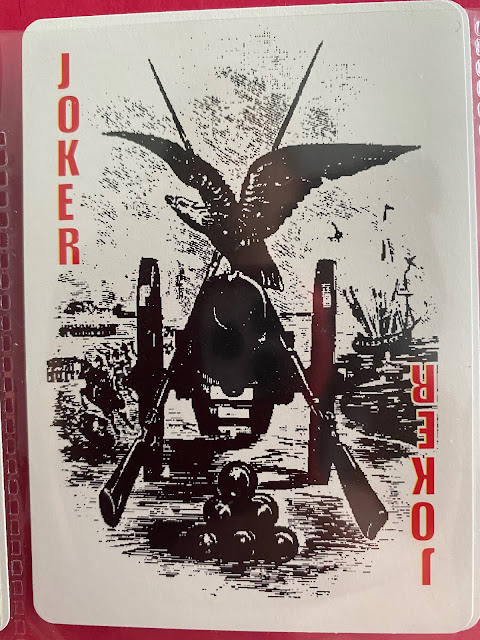 I'm now thinking about our National Holidays. What do they say about us?  The American Government has created the following:
Memorial Day - Last Monday in May - To remember those lost in the wars.
The 4th of July - The Fourth Day in July - To Celebrate the Birth of our Nation
Labor Day -  First Monday in September - To Celebrate Labor
Columbus Day - Second Monday in October - Due to the recent public recognition that Columbus was a slaver and so on, this is morphing as a holiday to either not existing (stock markets stay open) or to becoming an Indigenous People's Day.
Thanksgiving - Fourth Thursday in November - To Give thanks for something to someone.
Christmas Day - December 25th - This celebrates the birth of Jesus Christ. Initially in the spring, moved to December about a thousand years after He died.
New Year's Day - January 1st - It's make-a-resolution and nurse your hangover day.
Presidents Day - Third Monday in February - To celebrate our presidents, it was derived from Washington's and Lincoln's Birthday.
MLK Day - Third Monday in January - Celebrating Dr King's Birthday
It's interesting that Good Friday is not a Federal Holiday. There is also a less-celebrated Federal holiday worth noting: September 17, the day the Constitution was signed in 1787. In 2004 the day was designated as the mash-up of  celebrated Constitution Day and Citizenship Day (and the previously celebrated I am an American Day). My source on all this is Wikipedia US Holidays.

I just wondered, if it wasn't the government that created holidays, would we have a different set of holidays? My personal preference?  I'd elevate Valentines Day and reschedule it to the second Saturday in February. I'd also make Halloween the last Saturday in October. I'd redo Columbus Day entirely and convert it into a Multicultural Day to celebrate and build understanding of our differences.  I would import The Day of the Dead from Mexico. My understanding is that in Mexico, everyone picnics at cemeteries  as a way to remember, celebrate, and perhaps communicate with those that have passed on.

OK, back to jokers. Or at least to reflecting on the significance to me of the symbolism on the jokers. Today, I'm hung up on content.

Here's a nice symbol: the Liberty Bell.  It always reminds me of the old days when communities were more physically defined and an important distance was earshot.  Bells were an important part of the community communication. 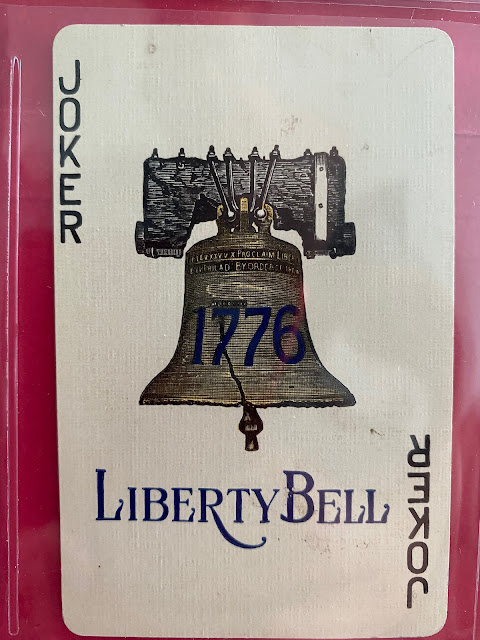 I've always thought there was a lot that should be said about the crack in the Liberty Bell. In my mind, the crack evokes the mistakes and shortcomings at the creation of the US.  Even as Freedom started to ring,  the bell was cracked and broken.

The first break to get addressed was the creation of a country based on the Articles of Confederation. It was a disaster.  A little more than a decade later, faced with overwhelming problems  including Shays Rebellion, many of the American leaders met in Philadelphia for a long hot summer. They had been convened to amend the Articles of Confederation. Instead, largely in secret, they formented a new revolution, this time scheming to replace the existing American "United States" system with a new Federally-focused American constitution.  It was treasonous, risky, and successful. They created the US Constitution.

But the Liberty Bell was still cracked. No freedom at all for Blacks (or other non-white races). No voting rights for women or for men who weren’t landowners. A pretty limited view of democracy. The original constitution had no mention of civil rights at all. This one flaw of the constitution was fixed as a condition of adopting the Constitution: the addition of a Bill of Rights.

Flaws that were later recognized and fixed in the constitution including recognizing that all Americans had the same rights including both genders and all the races.  Also, in the early 1900s, the Constitution was amended so that senators were directly voted.  I wonder if we'll fix more flaws soon perhaps to improve our representation of voters.
I'd love to see some progress increasing the separation of state and religion. I've wondered all my life why our money is not inscribed with "We, the People" rather than "In God We Trust." This was created in the 1950s as part of fighting the godless commies and included  adding “under god” to the Pledge of Allegiance. I think it's wrong and I'd love to see my generation, the Boomers, fix it before we pass on. Specifically, we should maintain a strict separation between our government and any support or mention of religion.  I wonder if we'll backtrack further on a women's right to choose? The Liberty Bell's cracks remain.

The World Fairs. Starting in the middle of the eighteen hundreds, learning about the world was often achieved by touring the World's Fairs. These  were held over many months where products and information and technology and animals from around the world were brought together so people could marvel and learn.

This joker, which I show front and back, is from the 1904 St Louis World's Fair. 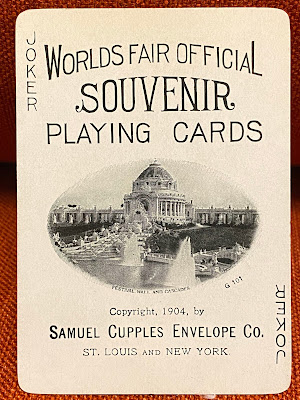 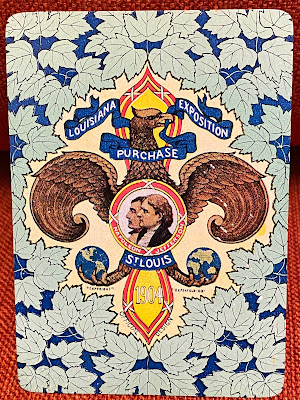 I like to see (maybe I should create it) a TV series on the World Fairs since each of them were so rife with stories. There is a best seller book about a Chicago World's Fair.  Well-known buildings left over from these world's fairs includes:
- the Crystal Palace in London from the first World Exposition in 1851 (there's a really great episode of the TV series on Victoria which tells the story of how Prince Albert championed and inspired this Exhibition to an astonishing level)
- Trocodero Palace in Paris for the 1871 World's Fair
- Eiffel Tower in Paris for the 1889 World Exhibition celebrating the 100th anniversary of the French Revolution
More US Exposition jokers in my collection: 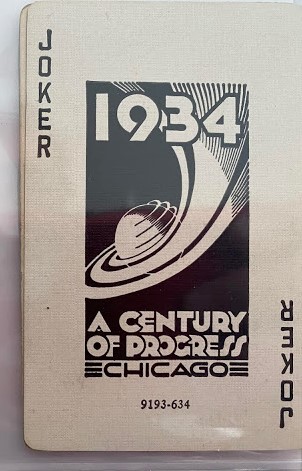 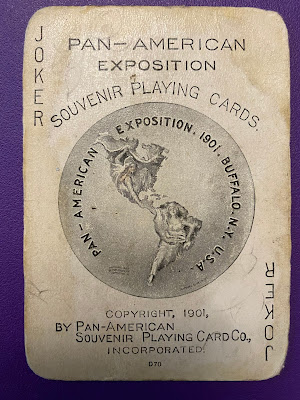 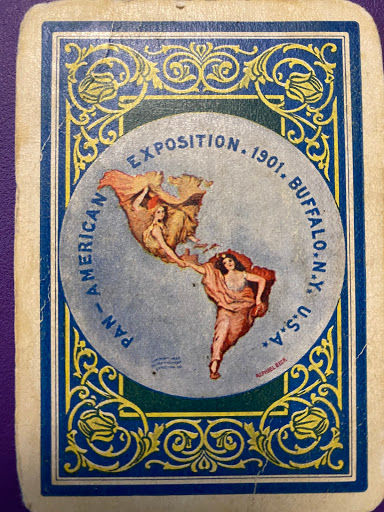 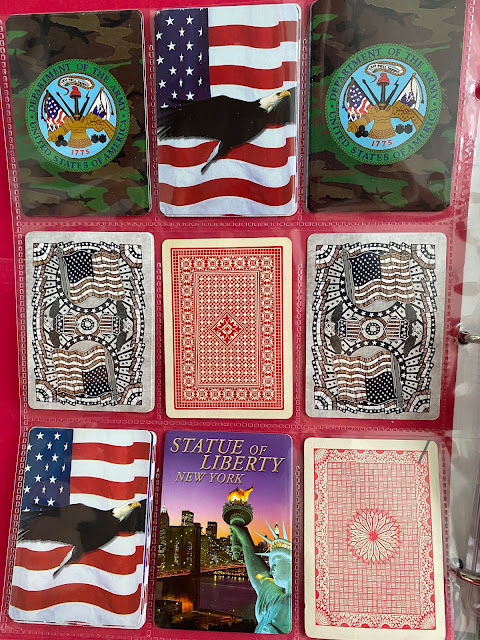 This page starts with my favorite symbols like the Liberty Bell but includes one of my least favorite modern symbol, the Confederate Flag.  I'd like to see it gone from modern usage and for it to only be known for its historical significance. I'd also like to move more aggressively in removing the names of people from buildings and such when their main historical role in history was aggressively asserting and defending their rights to own slaves. Names currently in use by the US Military which should be gotten rid of (thank you NYT for this reporting): Camp Beauregard, Fort Benning, Fort Bragg, Fort Gordon, Fort AP Hill, Fort Hood, Fort Lee, Fort Pickett, Fort Polk, and Fort Rucker. #Shameful. 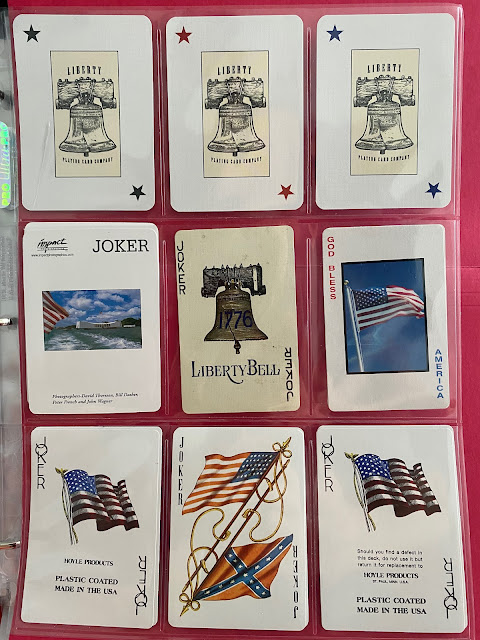 And here are the backs of those jokers. 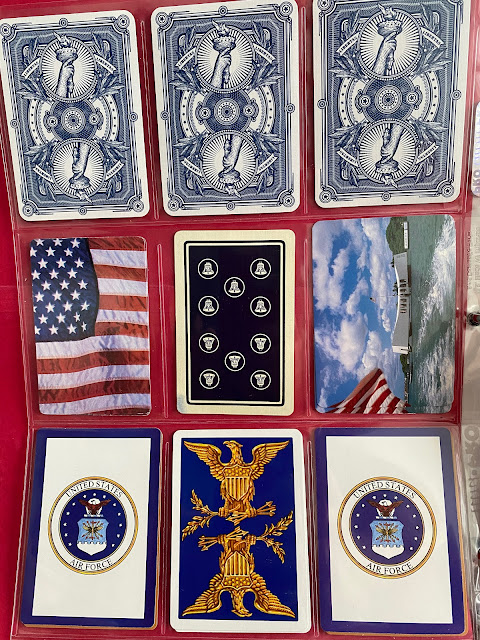 This page has several American Worlds Fair joker cards, The middle joker on the page is from the 1904 St Louis World Fair and shows the Festival Hall and the Cascades. That fair celebrated the Louisiana Purchase.

The joker on the right of the middle row celebrates A Century of Progress International Exposition, also known as The Chicago World's Fair  held from 1933 to 1934. 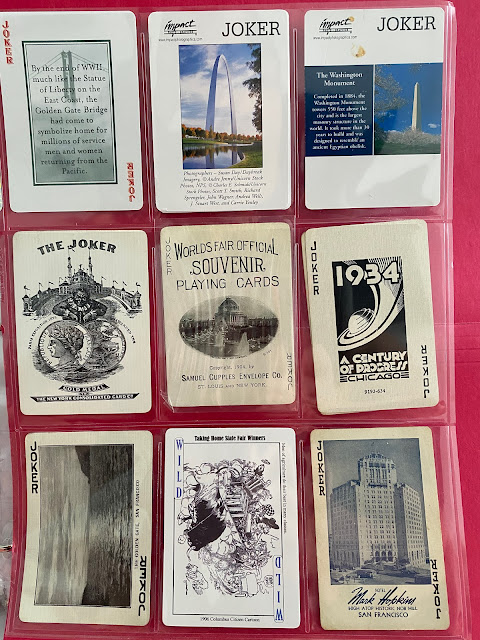 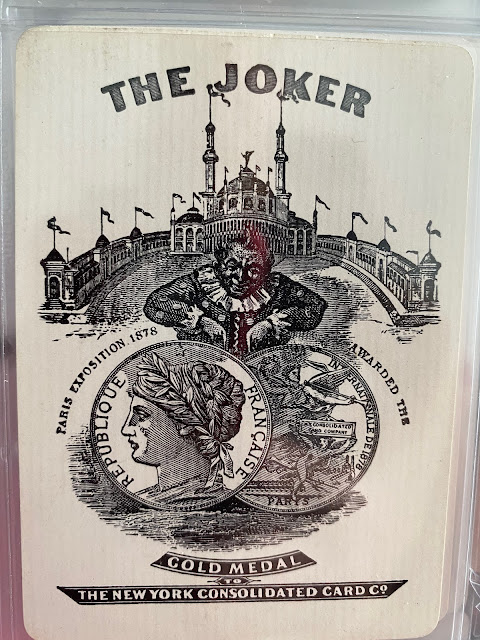 The Congress Joker section  are a subsection with 27 jokers. Here's un petit amuse gueule for you of them.

Here's a summary of the travel subsections of the joker collection: now all online and counted!
The total is 354 travel jokers.