I have for around the last 40 years, been paying attention to and enjoying the playing card jokers. Ofter times, I have thought what fun it would be to create my own jokers.  Recently, I had the opportunity to think about what sort of give-aways a company could give to its staff. I proposed that we print up our playing cards with our names on it. Nobody objected! (It helps that I'm the president of the company).

I even volunteered to help  design the jokers. To be honest, nobody else seemed to volunteer or even think about this rare opportunity to design our own custom joker.

I knew that I wanted to use our own characters, to be true to joker design traditions, but also to innovate. I picked the four characters and sketched out the concept listing elements that I wanted: topsy turvy, baubles (with a twist), juggling the pips, and so on..

Since I do not have the art skills myself for design (as anyone looking at this blog will suspect), I worked with a staff member, Juliana Jones (nee Juliana Whipple), to create  them. At first, she had NO idea what I was talking about. So I brought in some of my collection and showed them to her to show her what the elements should look like. Thanks Juliana.

And having helped design my own jokers, I can now check off one of the items on my bucket list.   Of course, I'm now thinking that maybe next year, we can take on designing an entirely original deck including all the faces. Would a transformational deck be too much to consider?

I've been asked a few times to write a little more about the design of these jokers.

Disclosure. I designed them.

I feel that they are true to the joker and other traditions. On the joker with the mouse (His name is Ed Mouse) and penguin (no name), each character is holding a bauble, a jester stick with a miniature of his own head on it.

They are wearing jester hats and each is conjuring pips from the four suits.

On the jokers with the cat and mouse, the traditional relationship between the cartoon cats and mice of rivalry and friendship is portrayed by the fact that each has a bauble with the others head. I've never seen another topsy turvy joker with this twist.

Since these are characters that are used in educational games (see HangMouse and Sound It Out on VocabularySpellingCity), they are conjuring educational materials. I hope you enjoy them a fraction as much as I do.

UPDATE: Oct 2017. I have now seen two other jokers where the jesters wand featured someone else's head. Both are in the "animal jokers, other" section of the collection. Both are monkeys with human heads..... 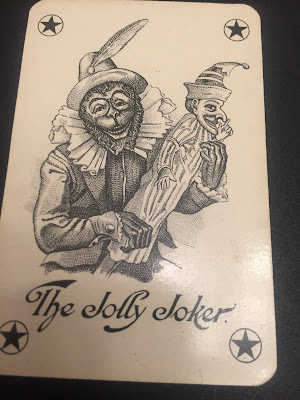 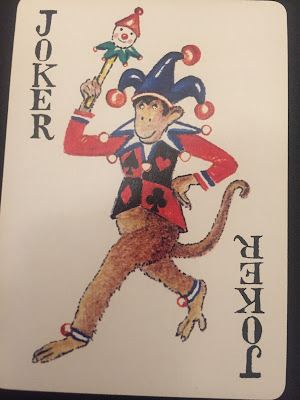 One more postscript (a PS, if you will) 12/26/2018, I've now seen a new variation of the head on the wand. The wand has a sad face held by a happy unicycling jester. Unlike the ones above, this is not from my collection. It was posted by Tom Van Berkum in the FB Joker Collecting Club group. ‎ 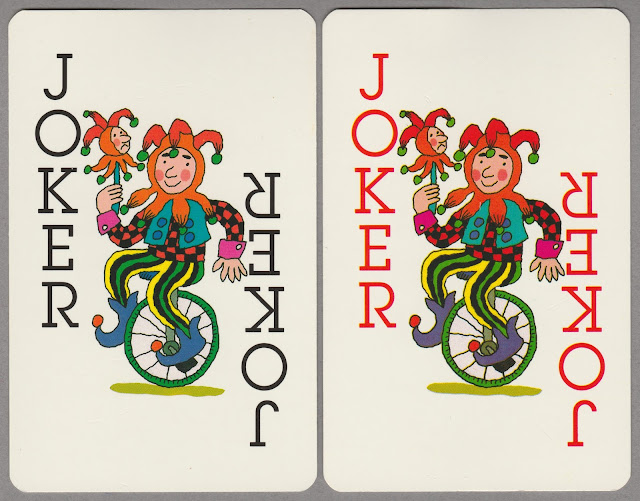