For instance, this week I received a number of jokers that I had bought. This whole group is of Polish jokers:
However, once I integrate them in the collection, they will get moved out to different thematic areas and I'll soon forget that they were Polish in origin. The purpose of this post is to wrestle with these issues since I feel important info about these jokers, this meta data (there's another technical term jumping into general vocabulary), is being lost which I should be retaining.

As a second example from this group, here's more info that I have about one of these jokers in which the info is not integrated within the collection. Notice above that there are a series of jokers in various colors which show a brooding sad jester, the green  one is highlighted below. 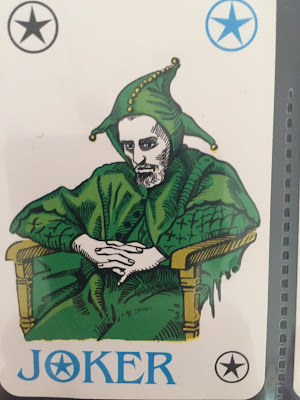 This figure is taken from a painting of some historical significance: 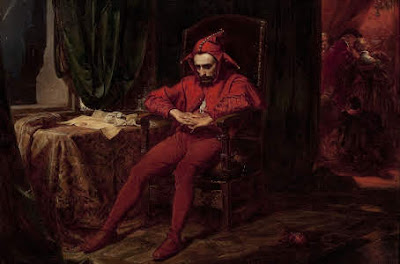 The painting is  by Jan Matejko, 1862. The distraught brooding court jester contrasts dramatically with his character and the court ball visible in the background. The painting is about a specific court jester and moment in history. Stańczyk is the jester and the year is 1533 (There's some debate about the date and if the jester is mythical). On the table lies a letter likely announcing that Poland has lost Smolensk (now in Russia) to the Grand Duchy of Muscovy, causing Stańczyk's sorrow and reflection on his fatherland's fate. The letter seems to have been read and then discarded by some official, and only the jester realizes its significance – while the rulers are partying...(Source: Wikipedia)

A third set of examples of the problem would have to do with jokers that come from specific decks. I have the decks in some cases but the info about the decks is not transmitted across to my collection.

I have mostly organized and collected my jokers thematically by categories that I have selected. Alternative schemes would be to focus on:


With these alternatives, there would be an emphasis on the info about the deck. I prefer it my way but I'd like to retain this other info inside the collection, not just here on the blog.

The collection sits on a shelf in three ring binders. 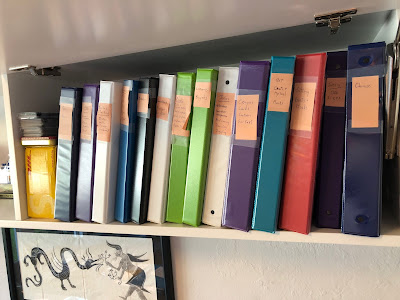 Inside each album are a series of plastic pages that hold 9 jokers showing the front and back.

I could add a page of info next to each page with the information about those jokers.  I would use a simple numbering scheme, one through nine with the top row being joker 1, 2, 3, etc and just write an info that I have about them.  For example, for this page: 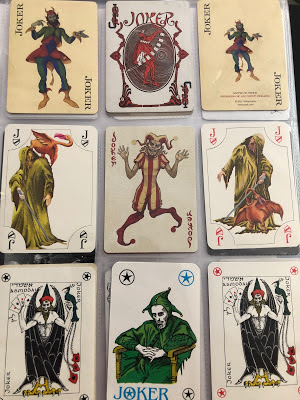 1 and 3. These among the most beautiful and artistically significant jokers in the collection. It is of a dybbuk and designed by the great artist of 1930s-50s, Arthur Szyk. It pictures a dybbuk which in Jewish or Kabalistic mythology is a malicious possessing spirit believed to be the dislocated soul of a dead person. Arthur Szyk was a famous artist in mid 20th Century who escaped the Holocaust by moving to America. Donated to me by Pam Stein in August 2017.

2.
3
4 & 6.
7 & 9. Multiple duplicates. This deck is: Jacob’s Bible cards printed by Piatnik for Israel company (Thanks to Ali Jerremalm in a Facebook discussion about these demon and devil jokers for helping me track it down). The WOPC.co.uk site says: "Jacob’s Bible Cards designed by Ze'ev Raban (1890-1970) in which the court cards and jokers represent personages from the Bible (old testament or history of the Jewish race). The numeral cards are not decorated. Ashmodai was made into the Joker, with the Hebrew inscription letz ( לֵץ ) which means jester."
8. A duplicate. (Repeat all the  Matejko, 1862, painting, history, and Stańczyk from above.