Jokers - Putting a bit of the collection online 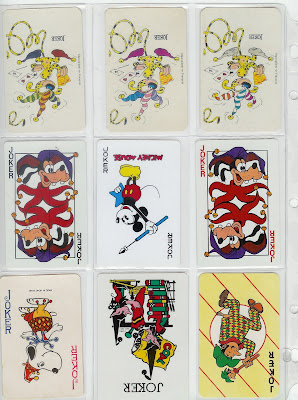 This is one of the first pages in my albums of jokers. I've noticed other collections on the web. I thought I'd try scanning a few pages and putting them up.
I would guess that I have about a thousand distinct jokers.

Update Feb 2018 - As I look back at this original post on my joker website, I'm a little underwhelmed.  The image is upside down and the page is collection of cartoon themed jokers. Not my favorite types.

My subsequent post, also written in January of 2009,  was about organizing jokers and learning about them was a little more far-reaching and eloquent.

I started collecting jokers when I was a working magician in high school. It had something to do with a trick whose climax was a reveal of many different cards now transformed into jokers and with different backs. It was a store-bought trick and I was disappointed in the selection of jokers.  The year was probably 1974.

I've been collecting on and off since then. I put some in photo albums before I graduated from high school in 1976. And then I put the albums on the shelf where they most sat untouched for many decades.  My interest grew in recent years starting with this post in January of 2009, updated in Feb, 2017
Posted by BBat50 at 3:47 PM