Jokers with political figures on them is a section inside the Real People part of the joker collection.  It starts with a George Bush Jr as the joker.


Here's a page with eight different George Bush Juniors on it plus one Bill Clinton because they are from the same deck and belong together. 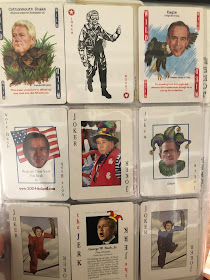 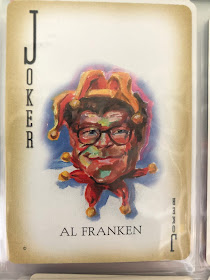 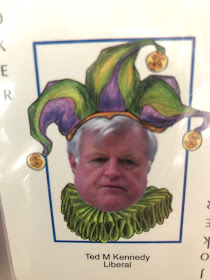 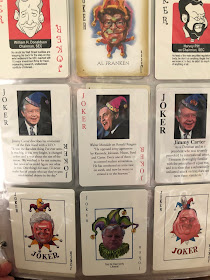 Here's a mix of US and foreign politicians as jokers. It's Al Gore in the top row, George McGovern in the middle of hte middle row, and UK"s Margaret Thatcher in the middle of the bottom row. 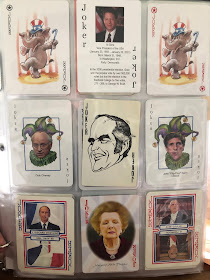 Before we leave US presidents, here's the joker from a deck published by Alfabet, Inc. and made by United States Playing Card Co. c.1972, called “The President’s Deck,” featuring   Richard Nixon (Kings), Pat Nixon (Queens), Spiro Agnew (Jacks), and Hubert Humphrey and George Wallace (Jokers). The Joker Poster from the US Museum of Playing Cards has one of the jokers on it. Dawson, The Hochman Encyclopedia of American Playing Cards, p.229, P13; Fournier, Playing Cards, North America 232. 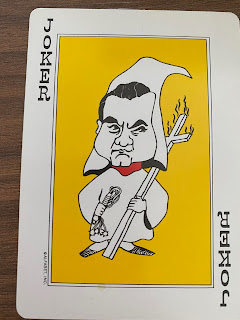 This is a page of the bad boys of history. I don't like them. 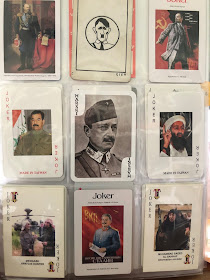 And some more political jokers. 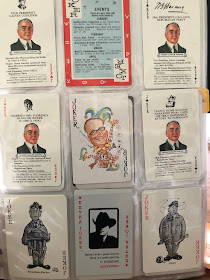 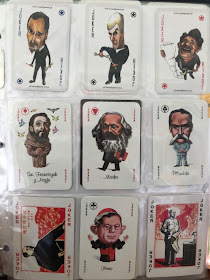 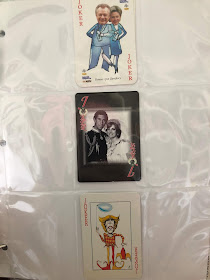 I'm still having trouble identifying some fo these people, Take a look at this page with all its questions:  Questions about some real people jokers.

There are other related sections to come such as real people entertainers (like Elvis Jokers), sports, and other Real People.  Sign up for email updates
Johne at 4:41 PM